anatomy of the elbow

Applied anatomy of the elbow

Medial cutaneous nerve of the forearm

The elbow joint helps the hand to approach or move away from the body, whatever the arm position resulting from shoulder movement. It consists of three ‘joints’, which lie within one joint capsule and together have two separate functions. 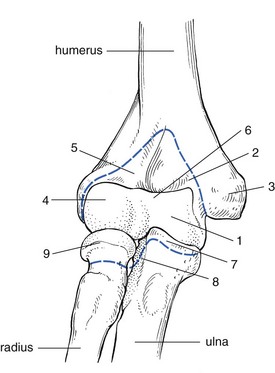 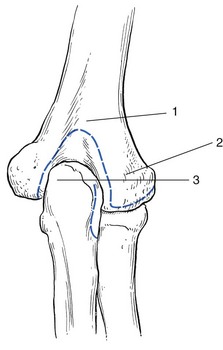 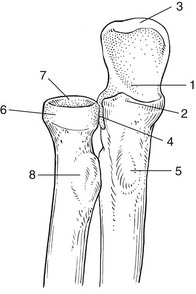 The three joints work closely together and make pronation and supination movements possible whatever the extent of flexion or extension of the elbow:

• The humeroulnar joint acts as a hinge. The articular surfaces on the humerus are the spool-shaped trochlea with, proximal to it, the coronoid fossa (ventral aspect) (see Gosling et al, Fig. 3.89) and the olecranon fossa (dorsal aspect) (see Gosling et al, Fig. 3.90). The other part of the joint is formed by the olecranon, with its trochlear notch and its olecranon (proximal) and coronoid (distal) processes.

• The humeroradial joint – a ball-and-socket joint – consists of (a) the spheroidal capitulum of the humerus and (b) the proximal surface of the head of the radius. Proximal to the capitulum lies the radial fossa and beside it a capitulotrochlear sulcus (between capitulum and trochlea). The articular facet of the radius, with which the proximal part of the humeroradial joint articulates, is at the top of the head of the radius. This facet exactly follows the shape of the humeral capitulum. Because it articulates with the capitulotrochlear sulcus at the ulnar side, it allows pronation–supination movements as well.

• The upper radioulnar joint is a trochoid (cone-shaped) joint. The circumference of the head of the radius articulates with the radial notch of the ulna.

The three joints lie within the same lax joint capsule, which is spanned by muscular fibres of the brachialis, triceps and anconeus muscles.

At the distal end of the humerus lie the two epicondyles, of which the medial one is more developed than the other. They are both extracapsular.

The capsule is reinforced by strong lateral ligaments (Fig. 4): 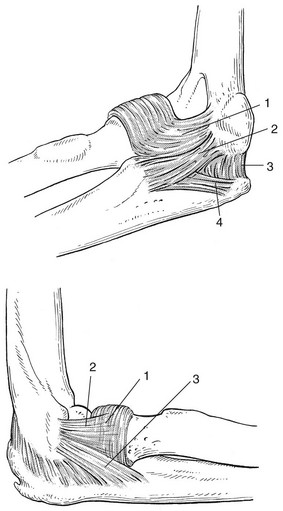 • The medial collateral ligament has an anterior part, which runs from the medial epicondyle of the humerus towards the annular ligament, a middle part towards the coronoid process, and a posterior part, directed towards the olecranon. All three parts are reinforced by an oblique band (ligament of Cooper) distally on the ulna.

These ligaments help to maintain the articular surfaces in contact with each other. They also limit lateral movements. Other ligamentous structures are:

• The radial annular ligament, a U-shaped fibrous collar, covered with cartilage at its inner aspect, joins the radial head to the proximal ulnar extremity so that they can articulate. It plays an important role in pronation–supination (see Gosling et al, Fig. 3.93).

• The quadrate ligament attaches the radial neck to the distal aspect of the radial notch of the ulna.

• The oblique cord extends inferolaterally from the lateral border of the tuberosity of the ulna to the radius, just below its tuberosity (see Putz, Fig. 315). It prevents downwards movement of the radius.

• The interosseous membrane (see Putz, Fig. 315) and the oblique cord join the two bones of the forearm to prevent any longitudinal movement and assist as a fulcrum in pronation–supination (i.e. diagonal rotation). They are both syndesmosis connections.

The distal extremity of the humerus is a fork, the axis of its articular surfaces running through the humeral capitulum and trochlea.

The coronoid fossa, into which the coronoid process of the ulna fits, as is the case for the olecranon fossa and olecranon process, together with the forward projection of both the lower humeral and the upper ulnar extremities, allows a considerable range of flexion–extension between forearm and upper arm.

The trochlear surface of the humerus articulates with the trochlear notch of the ulna along an imaginary line A–A’ which runs slightly oblique (downwards and outwards) in its posterior course. This obliquity explains the physiological valgus position of the elbow in extension (Fig. 5). In its anterior course, the axis of movement is horizontal: therefore, in flexion, the forearm lies exactly in front of the upper arm. There are, of course, individual differences. 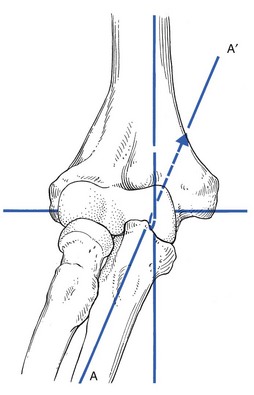 Extension is mainly limited by the olecranon abutting against the posterior aspect of the humerus in the olecranon fossa (Fig. 6) and by stretching of the anterior part of the joint capsule. The forearm then usually lies in line with the upper arm, except in most women and in some men, in whom the elbow may sometimes overextend. This overextension is the result of the format of the olecranon fossa and process. The end-feel of this movement is hard. 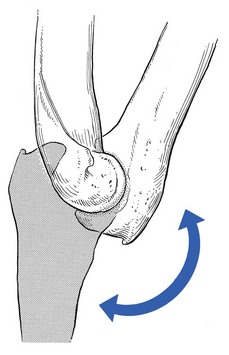 Fig 6 The range of flexion–extension movement.

Tags: A System of Orthopaedic Medicine
Jun 5, 2016 | Posted by admin in ORTHOPEDIC | Comments Off on anatomy of the elbow
Premium Wordpress Themes by UFO Themes
WordPress theme by UFO themes