Some Definitions,
Absorption, Fate, and Excretion,

Sharks have existed, virtually unchanged, for some 450 million years. Some scientists attribute this long staying power to the well-developed immune system in the shark, an immune system that is quite similar to our own. This chapter explores the use of alkylglycerols from sharks, both as immune stimulants and as powerful agents in the treatment of neoplastic disorders.

Alkylglycerols are ether-linked biologic compounds that have a long and fascinating history. Much of their early history is found in the literature of histochemistry and is related to methods of staining specific cellular components. One of the greatest histologists was Robert Feulgen (1884-1955), a German physiologic chemist who devised the Feulgen reaction. (The Feulgen reaction, or test, is a method to detect animal nucleic acids. It involves acid hydrolysis with hydrogen chloride followed by a 1% solution of decolorized rosaniline, which yields a red color in the presence of nucleic acids.) Feulgen and Voit discovered plasmalogens in 1924,1 at the time they thought they had discovered an aldehyde, which they called plasmal. The origin of plasmal was believed to be an unknown substance, which they called plasmalogen. They demonstrated the presence of this compound in many tissues, from protozoa to humans.

Plasmalogens, it was learned later, were ether lipid compounds that are formed in the metabolic pathway of phosphoglycerides. They differ from phosphoglycerides in that they contain an ether linkage on the C-1 of the glycerol molecule. Intensive work on the structure and formation of the plasmalogens continued over the next 35 years. It was many years before a formula for plasmalogens was finally agreed on; the biological function of plasmalogens and their role in organisms were finally discovered after 1960.

The term alkoxyl refers to an organic group RO, which is part of an ether group ROR. The term has been shortened to alkyl, so we denote ether lipid as alkylglyceride. The ether bond is the key to understanding the unique functioning of the alkylglycerol versus the common ester linkage of triglycerides. Figures 61-1 and 61-2 illustrate typical triglycerides and alkylglycerols, respectively.

One of the major sources of natural alkylglycerols is obtained from the Greenland shark, Somniosus microcephalus, which contains up to 50% of alkylglycerols. Other sources include the elasmobranch fish, such as the small shark, Chimaera monstrosa, and the dogfish, Squalus acanthias. Cod liver oil and certain mollusks are additional sources of alkylglycerols. These compounds have been found in various animal organs, including bone marrow fat, spleen, liver, plasma, and erythrocytes, and in milk. These compounds are found in the unsaponifiable fraction of the oils obtained from these animals. Three major natural alkylglycerols obtained from the Greenland shark are batyl alcohol, chimyl alcohol, and selachyl alcohol. Figure 61-3 illustrates the chemical structure of these compounds. Although chimyl and batyl alcohol are saturated chains, selachyl alcohol contains one unsaturated bond. All the ether bonds are on the number 3 carbon of glycerol. In the natural state, these compounds are usually present as ester compounds, with carbons 1 and 2 esterified with C16 or C18 saturated fatty acids. A fourth natural compound is a methoxy-substituted alkylglycerol, shown in Figure 61-4. This active compound comprises only a small percentage of natural shark liver oil–derived alkylglycerols (about 3%).2–4 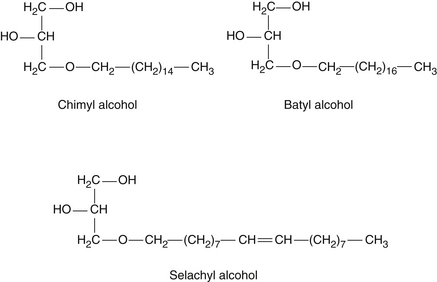 About 95% of radioactive (C14-labeled) chimyl alcohol administered orally is absorbed in the intestine, with 5% being excreted in the feces in one study.5 In the gastrointestinal tract, a large proportion of the ingested ether lipid in the form of 1-O-alkylglycerols is cleaved at the ether bond with the alkyl moieties, giving rise to fatty acids. The remainder is incorporated into 1-O-alkyl,2,3-diacyl-sn-glycerols, 1-O-alky-l-2-acyl-sn-glycerols, and 1-O-alkyl-2-acyl-sn-glycerol-3-phosphoethanolamines.6 Ether lipids are only minor components of the human diet, so that the major portion of ether lipids in the body is synthesized in the body. Absorption of the intact ether lipid is the rule, because ether lipids are not subject to the action of lipase, which is specific for the ester bond. After feeding chimyl alcohol to rats, analysis of the lymph fluid showed that 2% to 4% of the ether lipids are found as fatty acids combined in phospholipids. About 50% is found in the triglyceride fraction, whereas another 40% is found as the free chimyl alcohol or an esterified alcohol. In the triglyceride fraction, most of the original compound is found as palmitic acid, which indicates that the ether bound in the chimyl alcohol is split during the absorption process. The cetyl alcohol (a C 15 fatty alcohol) moiety of chimyl alcohol is oxidized to palmitic acid (a C 16 fatty acid) during its passage through the intestinal mucosa.

The effects of 1-alkylglycerols in the treatment of radiation-induced leukopenia have been studied extensively. Some investigators confirmed these beneficial effects,9 whereas others have not.10,11 Work by Lorenz et al12 found that lethal irradiation in mice and guinea pigs was counteracted by postirradiation injection of bone marrow. Sandler10 believed that batyl alcohol might be the active factor in bone marrow that prevented irradiation leukopenia. His observations, however, noted an increase mainly in erythropoiesis. Additional studies by Arturson and Linback,13 using intraperitoneal injections of batyl alcohol in mice, showed an increase in the production of both erythrocytes and reticulocytes.

Other studies confirmed the positive effect of the alkoxyglycerols on postirradiation damage. The work of Brohult and Homberg6 showed that lethal irradiation was counteracted by postirradiation injections of batyl alcohol. In 1963, Brohult14 published a thesis on the use of alkylglycerols in radiation treatment. A summary of the major findings in this paper follows:

• The postirradiation decrease in thrombocytes and white cells was notably less in patients treated with alkylglycerols than in those not given alkylglycerols.

• Patients with low thrombocyte counts due to radiation treatment or chemotherapy had increased counts after treatment with alkylglycerols.

• In irradiated rats pretreated with alkylglycerols, there was less of a decrease in megakaryocytes and nucleated cells in the bone marrow compared with untreated irradiated controls.

• A dose-related response with a maximum response at a certain level occurred, and then a decreased response occurred when that level was exceeded.

• The alkylglycerols increased the growth rate of rats after treatment and irradiation compared with untreated irradiated rats.

• Batyl alcohol had a greater effect than selachyl alcohol on increasing growth rate in rats.

• In a series of 350 patients with cervical cancer treated with alkylglycerol and given radiation therapy, there was a greater survival rate for 1 and 5 years than in untreated irradiated controls (see “Clinical Uses of the Alkylglycerols” for discussion in further detail).

Early in the investigation and study of ether lipids, an augmentation of the immune system seen in animals that ingested these compounds was evident. Apparently the macrophage was the key cell in this reaction. Inflamed cancerous tissue releases alkyl-lysophospholipids and other alkylglycerols, which are degradation products of alkyl phospholipids and alkyl neutral lipids. These compounds are found in cancerous tissue in high concentration but are in low concentration in normal tissues. One of these products, dodecylglycerol, is among the most potent macrophage activators known.15–18 The use of the natural sn-3-octylglycerol, or batyl alcohol, found in shark liver oil produced the same effect as dodecylglycerol.19 The mechanism of macrophage activation by the natural alkylglycerols is most likely identical to the action of lysophospholipids. Keeping in mind that activated macrophages exhibit increased phagocytosis, one method of assaying substances for activation potency is to measure the ingestion of various particles. Erythrocytes coated with immunoglobulin-G (IgG) are common target particles used in this assay.

Evidence indicates that oral intake of natural alkylglycerols results in higher levels of plasmalogens in the erythrocytes in human subjects. (Plasmalogens are ether compounds that are formed in the metabolic pathway of phosphoglycerides. They differ from phosphoglycerides in that they contain an ether linkage on the C-1 of the glycerol molecule.) Plasmalogens protect animal cell membranes against oxidative stress. In rat studies, batyl alcohol was incorporated into all tissues except brain tissue, and this action was a stereospecific incorporation.10 It has been shown that alkylglycerols are present in human and cow milk,19–21 along with other immunologic factors.22 Because the neonate has not developed a mature immune system,23 the prospect of transmitting immune functional components in the milk is a practical way to provide some protection for the newborn.24 In one study, lactating rats were fed alkylglycerols dissolved in corn oil; the composition of the alkylglycerols was similar to that found in shark liver oil, in that batyl alcohol, chimyl alcohol, and selachyl alcohol were the major constituents.24 The findings from this study showed that although peripheral blood granulocytes were elevated, there was no elevation of peripheral lymphocytes. Plasma levels of Igs were elevated in pups whose dams were fed alkylglycerols, but not in the controls. Both IgG and IgM were elevated to a significant degree.