The genus Vaccinium in the family Ericaceae comprises nearly 200 species, most of which are found in the northern hemisphere. This chapter focuses on Vaccinium myrtillus and the medicinal use of extracts of its fruit.

V. myrtillus, or bilberry, is a shrubby perennial plant that grows in the sandy areas of the northern United States and in the woods and forest meadows of Europe. The angular, green, branched stem grows from a creeping rootstock to a height of 1 to 1.5 ft. The 0.5- to 1-in-long leaves are oval, slightly dentate, and bright green, whereas the flowers are reddish- or greenish-pink and bell-shaped. The bilberry’s flowering season is April through June. The fruit is a blue-black berry.1

The pharmacologically active constituents of bilberries are its flavonoid components, specifically its anthocyanosides. An anthocyanoside is composed of an aglycone (e.g., anthocyanidin) bound to one of three glycosides (arabinoside, glucoside, or galactoside). More than 15 different anthocyanosides originate from the five aglycones found in V. myrtillus (Figure 132-1).2 Other members of the genus Vaccinium as well as Ribes nigrum (black currant) and Vitis vinifera (grape) contain similar anthocyanosides.3 Extracts of these fruits are also used for medicinal purposes in Europe. 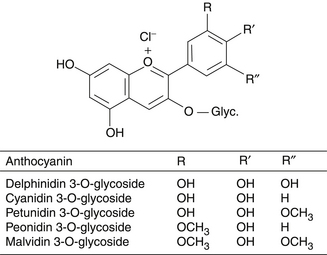 Bilberries are also good sources of bioavailable resveratrol4 and quercetin,5 although the levels of these compounds are lower than those found in other foods (e.g., the level of resveratol in bilberry is less than 10% of that reported for grapes). Nonetheless, consumption of bilberries may lead to significant elevations of these compounds in the serum because they are more bioavailable. In one study, 40 healthy men consumed 100 g/day of berries (black currants, lingonberries, and bilberries) for 8 weeks.5 Twenty subjects consuming their habitual diets served as controls. Blood levels of quercetin were obtained at baseline and at 2, 4, and 8 weeks. During the berry consumption period, mean serum concentrations of quercetin ranged between 21.4 and 25.3 mg/L in the berry group, which translated into 32% to 51% higher than in the control group—indicating that the berries used in this study were a good source of bioavailable quercetin.

The pharmacology of V. myrtillus is discussed almost entirely in relation to its anthocyanoside content, because research has focused primarily on the anthocyanosides.

Anthocyanosides possess significant collagen-stabilizing action.6–12 Collagen, the most abundant protein of the body, is responsible for maintaining the integrity of “ground substance” as well as tendons, ligaments, and cartilage. Collagen is destroyed during the inflammatory processes that occur in rheumatoid arthritis, periodontal disease, and other inflammatory conditions involving bones, joints, cartilage, and other connective tissue.

Anthocyanidins, proanthocyanidins, and other flavonoids are remarkable in their ability to prevent collagen destruction. The anthocyanidins in V. myrtillus extracts have been shown to affect collagen metabolism in the following ways:

• Anthocyanosides inhibit enzymatic cleavage of collagen by enzymes secreted by leukocytes during inflammation.6-8,10–12

• Anthocyanosides and other flavonoid components of V. myrtillus prevent the release and synthesis of compounds that promote inflammation, such as histamine, serine proteases, prostaglandins, and leukotrienes.6–8,13,14

Anthocyanosides have strong “vitamin P” activity.6 Included in their effects are the ability to raise intracellular vitamin C levels and reduce capillary permeability and fragility.6–8 Their effect in reducing capillary fragility and permeability is roughly twice that of rutin in both intensity and duration of action.18

V. myrtillus’s efficacy in the treatment of a variety of venous disorders relates to the ability of anthocyanosides to protect altered veins (postphlebotic veins as well as varicose veins) via two mechanisms17: (1) increasing the endothelial barrier effect by stabilizing the membrane phospholipids and (2) increasing the biosynthesis of the acid mucopolysaccharides of the connective ground substance, thus restoring the altered mucopolysaccharide pericapillary sheath. This latter effect leads to a marked increase in newly formed capillaries and collagen fibrils.

One interesting effect of the normalization of collagen structures and capillaries is the demonstration that anthocyanosides from V. myrtillus reduce the permeability of the blood-brain barrier.10,25 Greater blood-brain permeability has been linked to autoimmune diseases of the central nervous system, schizophrenia, “cerebral allergies,” and a variety of other central nervous system disorders. Presumably the anthocyanosides inhibit both enzymatic and nonenzymatic degradation of the basement membrane collagen of brain capillaries, thus helping to maintain or restore the brain’s protection from drugs, pollutants, naturally occurring degradation products, and other cerebral toxins.9–1225

Another study further demonstrates the remarkable efficacy of bilberry in protecting and strengthening the capillaries and microcirculation. In this study, the effects of anthocyanidins on hamster cheek microcirculation after ischemia and reperfusion were investigated. The treated group had diminished adherence of leukocytes to the venules after reperfusion, resulting in prevention of the markedly increased capillary permeability seen in the placebo group.26

Anthocyanosides, like many other flavonoids, have been shown to have significant antiaggregation effects on platelets.27–29 Their action in vivo appears to be direct antiaggregation effects on the platelets and an indirect effect via prostacyclin-like action.27–29 Prostacyclin is a potent stimulator of adenyl cyclase, the enzyme that catalyzes the production of cyclic adenosine monophosphate from adenosine triphosphate. Cyclic adenosine monophosphate prevents platelets from aggregating and adhering to the endothelial surface.

Anthocyanoside extracts have demonstrated significant vascular smooth muscle–relaxing effects in a variety of experimental models.30–32 The clinical application of this research may be in the treatment of dysmenorrhea, for which a preliminary study demonstrated positive effects.33

An in vitro study demonstrated that among ethanol extracts of 10 edible berries, bilberry extract was the most effective at inhibiting the growth of human leukemia cells and colon carcinoma cells.34 Bilberry extract was shown to possess dual action in this regard through the induction of apoptosis (programmed cell death) and promotion of nucleosomal DNA fragmentation. Bilberry anthocyanidins have also been shown to inhibit angiogenesis. 35 Bilberry extract was the most potent of the extracts tested because it contained the largest amounts of phenolic compounds, including anthocyanins, and showed the greatest free radical scavenging activity. Pure delphinidin and malvidin, like the glycosides isolated from the bilberry extract, induced apoptosis in the leukemia cells. However, only pure delphinidin and the glycoside isolated from the bilberry extract, but not malvidin and the glycoside, inhibited the growth of human colon cancer cells. Twenty-five colorectal cancer patients scheduled to undergo resection of primary tumor or liver metastases received 1.4, 2.8, or 5.6 g (containing 0.5 to 2.0 g of anthocyanins) daily for 7 days before surgery. In tumor tissue from all patients, proliferation was decreased by 7% compared with preintervention values.36