Expose the L4, L5 and L6 nerve root, each was indicated by a line 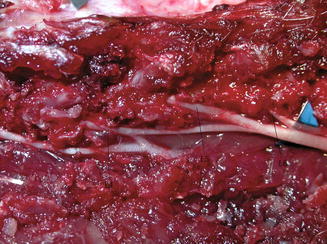 Completely explosion, each nerve root was indicated by a line

Pre- and post-operation (4-, 8-, and 12-weeks), walking tracks were obtained before induction of anesthesia. Animals were tested in a confined walkway 42-cm in length and 8.2-cm in width, with a dark shelter at the end. A sheet of white paper was placed on the floor of the walking corridor. After the hind paws of the rats were pressed down onto a paint-soaked sponge, they were allowed to walk down the corridor, leaving hind footprints on the paper. In each walking track, three footprints were analyzed by a single observer, and the average of the measurements was used in SFI calculations. Several measurements were taken from the footprints: (I) distance between heel and third toe, print length (PL); (II) distance between the first and the fifth toe, the toe spread (TS); and (III) distance between the second and the fourth toe, the intermediary toe spread (ITS). All three measurements were taken from the right (experimental) sides. The SFI was calculated according to the following formula, as described by Bain et al. [15]:

The SFI oscillates around 0 for normal nerve function, and a figure of around −100 indicates total dysfunction.

Following the electrophysiological examination 12 weeks after severing of the nerve, the right triceps surae, anterior tibialis and biceps femoris were dissected out from bilateral hind limbs and weighed while wet. After weighing, the muscles were fixed with 4 % paraformaldehyde in phosphate-buffered saline (PBS, pH 7.4) at 4 °C.

10.2.2.5 Electron Microscopic Observation of the Ultrastructure of the Target Muscle and Motor End-Plate (MEP)

The triceps surae, anterior tibialis and biceps femoris were fixed in 10 % formalin for 40 h, dehydrated and paraffin-embedded. They were then sliced along the middle of the muscle into 5 mm sections, hematoxylin and eosin stained, and analyzed using the FW4000 digital imaging workstation (Leica Inc., Solms, Germany).

10.2.2.7 Fibrotic Components in the Target Muscle

Results were expressed as mean ± standard deviation, and SPSS 11.0 software (SPSS Inc., Chicago, IL) was used. One-way analysis of variance was used to determine significant differences between the groups, with the Student–Newman–Keuls test for multiple comparisons. Differences were considered significant at P < 0.05. We certify that all applicable institutional and governmental regulations concerning the ethical use of animals were followed during the course of this research.

The animals in all groups survived for the duration of the experiments, without wound infection or self-eating of limbs.

Reproducible walking tracks could be measured from all rats. Before severing the nerve, the mean SFI was assessed in groups A, B, C and D, with no significant differences observed (P > 0.05). At the 4th, 8th, and 12th week after surgery, the mean SFI was again assessed, with no significant differences found among the four groups at any of the time points (P > 0.05) (Table 10.3).