In order to provide a comprehensive analysis of the knee condition and its impact on activity levels after anterior cruciate ligament (ACL) reconstruction, some authors1,24 have suggested that rating systems measure a variety of symptoms, sports and daily activity functions, and objective findings. To our knowledge, only two such systems are available that measure all of these factors and that have established psychometric properties of reliability, validity, and responsiveness; the Cincinnati Knee Rating System (CKRS)3,16 and the International Knee Documentation Committee (IKDC) system.9 Each of these systems measures pain, swelling, giving-way, functions of sports and daily activities, sports activity levels, patient perception of the knee condition, range of knee motion, joint effusion, tibiofemoral and patellofemoral compartment factors, knee ligament subluxations, radiographic indices, and function. The CKRS is described in detail in Chapter 44.

The IKDC is one of the most commonly used instruments to determine the results of ACL reconstruction and other knee operative procedures and has been considered a “gold standard” in the validity analyses and development of other systems.7,9,11,14 This chapter describes the history, development, initial forms, and revisions of the IKDC system. Investigations that provided reliability, validity, and responsiveness data are summarized. The major sections of the current knee forms are described.

HISTORY OF THE IKDC

As early as 1983, some authors5 expressed concern that comparing results of different methods of treatment of ACL ruptures was not possible without a standardized method of evaluation. At that time, a multitude of scoring systems had been proposed to quantify symptoms and functional limitations caused by ACL injuries and to evaluate the results of operative and conservative treatment. None of these systems was accepted internationally. One major problem was that the majority assigned numerical values to factors that were not quantifiable, weighted certain factors over others, and then added these scores together to provide an excellent, good, fair, or poor overall outcome grade. Because the content and relative weight given to each component varied greatly from one system to another, individuals rated as excellent or good on one instrument could be rated as fair or poor on another.24

In order to develop a worldwide, standardized knee ligament rating system, a group of knee surgeons from Europe (European Society of Sports Traumatology, Knee Surgery and Arthroscopy [ESKA]) and America (American Orthopaedic Society for Sports Medicine [AOSSM]) founded the IKDC in 1987 (Table 45-1). Common terminology to describe knee motion and function were agreed upon by the committee members.19 A set of measurements to determine knee motion limits was validated in formal investigations.4,18,19 Methods to quantify knee function, activity levels, and symptoms were evaluated. A single-page Knee Ligament Standard Evaluation Form was then created (Fig. 45-1).6,11 The goals of the evaluation form were to measure the essential criteria judged at that time to be necessary to determine the results of treatment and to be simple enough to complete that research personnel were not required. The committee anticipated that a more comprehensive system would eventually be developed. The form evaluated sports activity levels and eight domains including patient assessment of knee function, symptoms, range of knee motion, ligament evaluation, compartment findings, harvest site pathology, radiographic findings, and single-leg hop function testing. 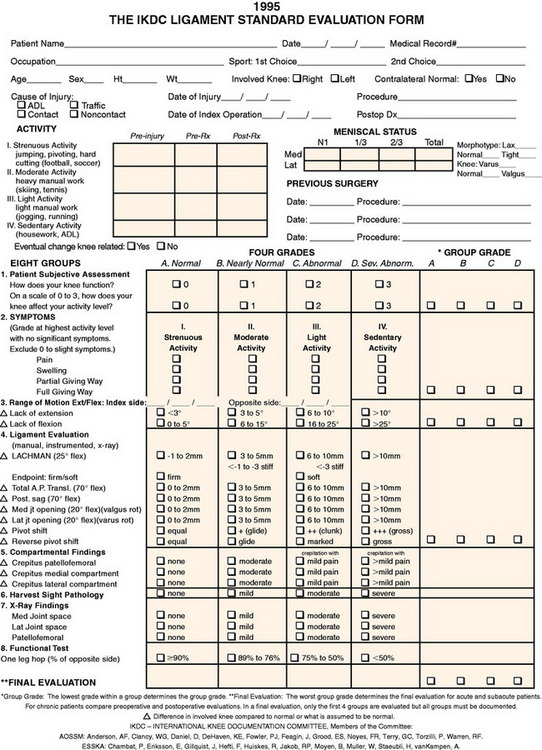 (Reprinted with permission from the American Orthopaedic Society for Sports Medicine, Rosemont, IL.)

• International Knee Documentation Committee (IKDC) is commonly used to determine the results of anterior cruciate ligament reconstructions and other knee operations.
• In order to develop a worldwide, standardized knee rating system, a group of knee surgeons founded the IKDC in 1987.
• Committee members agreed upon

The 1995 IKDC evaluation form adopted the philosophy of Noyes and coworkers (contained in the CKRS17,20) in the assessment of symptoms that were graded at the highest activity level possible without incurring pain, swelling, or giving-way. Two questions determined the patient assessment of knee function and its effect on activity level. A total of 24 factors were rated as either normal, nearly normal, abnormal, or severely abnormal, as shown in Figure 45-1. Four domains (patient subjective assessment, symptoms, range of motion, and ligament evaluation) received a final rating, and an overall evaluation result was derived, also using the same philosophy as that of the CKRS.3,16 In this manner, the lowest-graded factor determined the overall grade for each individual domain and the final evaluation. For example, a knee that had a positive pivot shift test and 6 mm of increased anteroposterior displacement on KT-2000 testing would receive an abnormal rating, even if all of the other categories were rated as normal or nearly normal. The form also rated sports activities according to a four-level gradient of strenuous, moderate, light, or sedentary.

Irrgang and associates11 evaluated the construct and concurrent validity of the 1995 IKDC evaluation form in 133 patients who were 1 to 5 years post–ACL reconstruction. These authors reported that the form was useful for reporting outcome after ACL reconstruction. The scoring system clearly distinguished patients whose outcomes were normal or nearly normal from those who were abnormal or severely abnormal, thus preventing a positively biased result when a significant problem in the knee persisted postoperatively. All the domains contributed to the final rating; however, symptoms and knee ligament evaluation accounted for 62% of the variance in the final rating. The authors did not conduct reliability or responsiveness testing in this investigation.

Paxton and colleagues21 reported the reliability and internal consistency of the 1995 IKDC evaluation form in 153 patients who had sustained patellar dislocations. The patients completed the form 2 to 5 years after their injury. Adequate reliability and internal consistency (correlation coefficients, 0.82 and 0.84, respectively) were reported. However, high ceiling effects were noted that indicated poor content validity for this group of patients.

COMPONENTS OF THE IKDC

The IKDC Knee scoring System currently includes six forms for research investigations. The IKDC is copyrighted by the AOSSM. All of the forms are available by contacting the AOSSM at www.aossm.org/tabs/Index.aspx

In 1997, the AOSSM elected to revise the IKDC rating system in order to broaden its application. The focus of the new committee (Table 45-2) shifted from designing and implementing a disease-specific (knee ligament) instrument to creating and testing a general (generic) knee problem instrument. Thus, the 2000 IKDC Subjective Knee Evaluation Form (Fig. 45-2) was devised to rate symptoms and functional limitations for a variety of knee disorders and operations including ligament and meniscus tears, patellofemoral pain, and articular cartilage lesions. This form comprises 18 questions in the domains of symptoms, functions of daily and sports activities, current function of the knee, and participation in work and sports. An overall score is calculated on the sum of the questions answered (at least 90% of the questions must be answered) divided by the maximum possible score, as shown in Figure 45-2. The AOSSM provides an online scoring worksheet through its website that calculates a patient’s raw and percentile scores based on normative data. This form does not analyze findings from a physical examination, radiographs, knee arthrometer tests, function tests, or other objective tests.