Spastic paresis is a common term to denominate typical presentations of the motor disorders in a specific type of cerebral palsy. By definition, cerebral palsy (CP) describes a group of disorders of development of movement and posture, causing activity limitation, that are attributed to nonprogressive disturbances that occurred in the developing fetal or infant brain (Bax et al. 2005). In contrast to most other clinical disorders described in this book, CP is a neurological disorder that does not directly affect fascia or other connective tissues. From this perspective, this chapter deals with fascia-related phenomena in a clinical disorder that does not primarily affect fascia itself.

Spasticity is a neurological symptom characterized by a velocity-dependent increase in tonic stretch reflexes with exaggerated tendon jerks resulting from hyperexcitability of the stretch reflex (Smeulders & Kreulen 2007). Although the term spasticity is commonly added to the diagnosis of CP, it is seldom the vanguard of its clinical presentation. In the classical perspective, the muscles susceptible to spasticity are supposed to be insufficiently opposed by paretic antagonists and yield a preferred posture of the extremity towards endorotation, flexion, pronation and adduction. During active use of the extremity, interplay between agonistic and antagonistic muscle groups yields a new equilibrium resulting in a limited available range of motion, typical disturbed movement patterns and, eventually, awkward postures based on this equilibrium, where spasticity might be difficult to provoke as a clinical symptom. As such, these joint positions are not necessarily static contractures in the classical sense. For a sizable part, they can acutely be altered in rest, after careful manipulation or under anesthesia. The role of fascia in this mechanism is underexposed in literature. How are the functional properties of intra-, inter- and extramuscular fascial connective tissues involved in this altered musculoskeletal balance?

Surgical treatment of the upper extremity in spastic paresis

Generally, interventions are aimed at decreasing postural effects of spasticity, improving function and cosmesis by various conservative therapy regimes, splinting regimes, pharmaceutical treatment and/or surgery. This chapter focuses on the surgical treatment of the upper extremity in cerebral palsy, because the role of fascia in spastic paresis of the upper extremity is best illustrated from observations during surgery. Surgical treatment is indicated only in carefully selected patients. It is paramount for the success of treatment that the desired goal of the patient is in agreement with a realistic and a surgically attainable goal. Patients with a desire for an improved manipulation of objects have to meet more strict criteria than patients with only a desire to relieve pain or an improved position for hygiene purposes. Goals of treatment can be (a) an improvement of active manual dexterity of the affected hand, (b) an improvement of bimanual dexterity by better positioning of the affected hand, (c) improved cosmetic appearance and (d) relief of pain and/or positioning of the hand for practical purposes such as personal hygiene. Before surgery, all patients are required to have (1) realistic expectations of what can be achieved, (2) an explicit motivation to reach that goal, and (3) access to a well-organized postoperative rehabilitation regime. If the goal of treatment includes an improvement of manual dexterity, the patient is also required (4) to have voluntary muscle control over the hand and forearm, (5) to show an active prehension of the affected extremity, and (6) to have sufficient insight into the principles of treatment to actively engage in the rehabilitation regime.

The next step is to compose the optimal combination of surgical procedures in one session that will meet the goal of treatment. A surgical plan is made combining three types of procedures: (i) decreasing unwanted function by means of tenotomy, aponeurectomy, tendon lengthening, or muscle release procedures; (ii) reinforcing the desired function on the paretic side by tendon transfer or tendon rerouting procedures; and (iii) stabilization of joint instability by arthrodesis (definite joint fusion), capsulodesis (tightening the joint capsule) or tenodesis (limiting joint function by tendon fixation) procedures. A long clinical experience with different surgical regimes is described in the literature, but evidence for a reliable algorithm is lacking. Surgical interventions are based on current assumptions about the nature of muscle function in spastic paresis and how they contribute to the awkward joint positions we aim to correct. The results of these interventions are not consistent in all patients and tend to be unpredictable. Therefore, patient selection as described above is very strict and international consensus exists to plan and perform surgery only at no risk of losing any existing hand function, and to set modest expectations of the clinical outcome.

A better understanding of how the interplay of the differently affected muscles in spastic paresis contributes to the disabling joint positions of the upper extremity might allow for a more reliable and predictable rationale in tailoring the surgical techniques to meet the desired functional result.

Successful treatment of patients with spastic joint positions by splinting, botulin toxin injection, surgical lengthening, or tenotomy of spastic muscles suggests that these muscles themselves are the prime cause of the limited range of motion of the joint involved during active and passive movement. Although clinically these observations are straightforward, it has been very difficult to find good scientific evidence regarding the specific cause of such joint position and even regarding the secret behind the success of the treatment.

Many of the efforts to provide evidence have been directed at alleged structural changes of spastic muscles as an adaptive response to pathological conditions. Hence, spastic muscles have been considered to be atrophied as a consequence of disuse (Gracies 2005), hypertrophic and fibrotic as an adaptive response to hypertonicity, increasing the amount of collagen within the muscles (Booth et al. 2001), while the long-standing shortened position of the joints has been proposed to cause structural shortening of both intramuscular connective tissues, muscle fibers, and joint capsules (Tardieu et al. 1982; Botte et al. 1988; Fry et al. 2007; Pontén et al. 2007). The role of fascia in spastic paresis has, as such, long been acknowledged. However, controversy exists, as most histological studies fail to prove that spastic muscles are fibrotic and structurally shortened. A few reports even showed biopsies of spastic muscle containing normal amounts of connective tissue (Romanini et al. 1989; Ito et al. 1996; Marbini et al. 2002). Partly in contrast, others reported an increased amount of connective tissue in some of the biopsies from several spastic muscles. However, even in those studies 50% of muscle biopsies were considered normal or only showed a limited abnormality, despite “the presence of static and dynamic contractures” involving the target muscles. Likewise, among muscle biopsies that did indicate fibrosis were those of patients who clinically did not show contractures (Castle et al. 1979; Rose et al. 1994). On the other hand, a sole report indicates a significant correlation found between clinically measured muscle tone and the amount of collagen in spastic muscle biopsies (Booth et al. 2001). Likewise, it has been more and more accepted that loss of serial sarcomeres within muscle fibers as a cause for structural shortening of muscle is not a common finding in spastic muscles, with muscle atrophy present in some, but not all (Fry et al. 2007; Pontén et al. 2007).

This review of the scientific work on spastic muscle function reveals a lack of a sound scientific consensus regarding the nature of the contribution of spastic muscles to the disabling joint positions of the extremities in spastic paresis.

Interestingly, we noticed that tenotomy of FCU did not result in a major retraction of the muscle to slack length (even if the muscle was activated maximally). Instead, on tenotomy and after activation FCU shortened a little, but remained relatively close to its former insertion (Fig. 5.4.1) (Kreulen et al. 2003). Even more surprisingly, as the wrist was moved passively from flexion to extension during surgery, tenotomized FCU (not spanning the wrist any longer) was lengthened almost to a similar degree as the intact FCU, showing that the FCU is connected to structures that span the wrist via epimuscular or epitendinous connective tissues (creating a distally directed myofascial load on FCU; for further explanation see Chapter 3.2). Even after tenotomy, such connections pull the FCU along on passive wrist extension. On wrist flexion, FCU retracted elastically so the process was repeatable during cyclic movement of the wrist. Apparently, the connective tissues involved were so stiff that they could transmit the full FCU force, and strong enough so that they did not break on such force exertion. Such FCU length changes after tenotomy diminished greatly, but did not fully disappear after partial dissection in distal-proximal direction (along 50–60% of the muscle belly, necessary for subsequent tendon rerouting). These results place the concept regarding the role of the fascia in spastic joint positions in a whole new perspective. 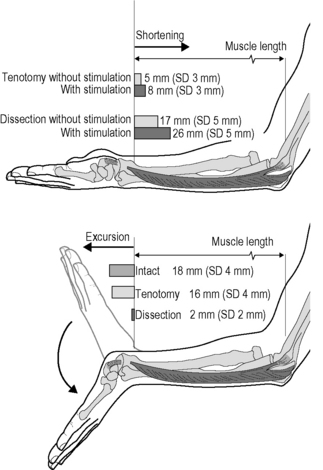 Fig. 5.4.1 • Diagram showing in the upper graph the mean shortening of the FCU muscle after tenotomy and after dissection, before and after tetanic contraction in millimeters (mm). The lower graph shows the mean passive excursion of the FCU during movement of the wrist from maximal flexion to maximal extension before tenotomy, after tenotomy, and after muscle dissection.

Tags: Fascia The Tensional Network of the Human Body The science and c
Aug 24, 2016 | Posted by admin in ORTHOPEDIC | Comments Off on Spastic paresis
Premium Wordpress Themes by UFO Themes
WordPress theme by UFO themes