Roles of fascia in molecular biology of adaptation of muscle size

Roles of fascia in molecular biology of adaptation of muscle size

Richard T. Jaspers, Can A. Yucesoy and Peter A. Huijing

Skeletal muscle is able to adapt its properties in response to changes in functional demands because of its ability to activate and deactivate molecular systems for protein synthesis and degradation. Adequate functioning of these systems is particularly important in cases of muscle injury, neurological disorders, or chronic diseases associated with loss of muscle mass. With disuse, atrophy is a common adaptation limiting the capability to generate force. Optimizing intervention effects aimed at redressing this requires knowledge of the underlying mechanisms.

The active force a muscle is able to exert at different lengths depends on the number of sarcomeres arranged in series (within myofibers) and in parallel (within the muscle). The more sarcomeres in series (i.e., longer optimum fiber length), the higher is the length range of active force exertion. However, this has no effect on the maximum force a myofiber can exert (at its optimum length). Therefore, optimal muscle force is determined by both the number of the myofibers and the number and size of myofibrils arranged in parallel within myofibers. The muscle cross-sectional area (Af) perpendicular to the fiber direction at a standardized mean sarcomere length (e.g., optimum length) provides an estimate of the maximum force a muscle is able to exert.

Muscles also adapt their size in response to the length at which they are maintained. Experiments in which rodent muscles were immobilized at high lengths, for periods varying from several days to 4 weeks, have shown a 20% hypertrophy and a 15% increase in the number of sarcomeres in series (Williams & Goldspink 1978). This was arranged in such a way that the optimum length of the adapted muscle was attained at the immobilized position. Opposite effects have been reported for muscles which were immobilized in a maximally shortened position: yielding 30–40% atrophy as well as a similar reduction in serial sarcomere numbers (particularly low degree pennate muscle) (Williams & Goldspink 1978; Heslinga & Huijing 1993). Also for this condition, optimal force was reduced substantially and optimum length was attained at the immobilized position (Williams & Goldspink 1978; Heslinga et al. 1995).

From these results, a simple rule has been derived stating that for any muscle adaptation of Af and serial sarcomere number is regulated in such a way that muscle optimum length is attained at the joint angle at which a muscle is most frequently active (Herring et al. 1984). Although the simple rule seems to be valid for several types of muscles and species, controversies and exceptions do exist. It has been suggested that, for some muscles, the length ranges of operation in daily activities differ from those predicted by the simple rule that muscles are operating around their optimum length (Burkholder & Lieber 2001).

Other evidence suggesting that high actual myofiber strain per se does not stimulate hypertrophy and increase of serial sarcomere number is derived from ex-vivo cultures of mature myofibers (see below). This indicates the need for more detailed understanding of mechanisms via which mechanical loading affects the rate of protein synthesis and degradation.

The quantity of proteins constituting force generating or passive elements within a myofiber is the net result of ongoing processes of simultaneous protein synthesis and degradation, both being modulated in response to mechanical loading.

Transcription of the deoxyribonucleic acid (DNA) of the genome

The genetic code itself resides within DNA strings located within the nuclei of the myofiber, but DNA is never applied directly in the synthesis of proteins. First, DNA is “transcribed” (copied) into messenger ribonucleic acid (mRNA) that carries “the recipe” from the DNA. This process is referred to as “transcription”. The rate of protein synthesis depends on the quantity of DNA available, as well as on the rate of transcription. Most cells have only one nucleus, which means that the quantity of DNA cannot be regulated. Myofibers contain a large pool of nuclei. In adaptation, this pool may be enlarged or reduced by proliferation satellite cells (i.e., muscle stem cells resident between the sarcolemma and the basal lamina) which donate additional nuclei to the myofiber or remove nuclei (i.e., DNA degradation), respectively.

Within the cytoplasm, mRNA binds ribosomes; this complex is used to “translate” mRNA information into a specific sequence of amino acids that constitutes the corresponding protein. The rate of protein synthesis depends also on the rate of translation. This rate is determined by the number of ribosomes per mRNA molecule, as well as by the rate of translation per unit mRNA.

Completion of the protein synthesis

The chain of amino acids undergoes post-translational modifications, which ultimately results in the mature protein.

The critical factor determining the overall rate of protein synthesis is the one that is limiting the whole chain of processes.

Protein degradation is regulated by activity of proteolytic enzymes and by expression of cofactors leading to altered expression of these enzymes and their activation. The most important myofiber proteolytic system is the proteasome. Proteins to be degraded are bound to multiple ubiquitin molecules, which marks them for degradation by the proteasome complex (Jackman & Kandarian 2004).

Mechanochemical signaling and mechanotransduction for protein synthesis and degradation in muscle

Myofibers are equipped with sensors via which protein synthesis and degradation are directly and/or indirectly affected (Fig. 8.4.1). Several types of mechanosensor are known: (1) stretch activated calcium channels within the sarcolemma that open as myofibers are stretched, allowing the influx of calcium into the cytoplasm. Other transmembrane-receptors such as (2) the integrin and (3) dystroglycan complexes connect the intracellular cytoskeleton to the extracellular matrix (ECM) that is reinforced by collagen structures within the basal lamina and endomysium. Mechanical loading of such receptors and channels activates enzymes associated with sarcolemma that subsequently elicit cascades of chemical reactions. This mechanochemical signal transduction stimulates muscle gene expression and/or rates of translation (Huijing & Jaspers 2005). Signaling via these receptors and channels is associated also with increased expression of growth factors that are secreted into the extracellular matrix. These factors act on myofibers in which they are produced (autocrine signaling) or on neighbouring myofibers and other cells (paracrine signaling). Among many growth factors expressed in muscle, the following play important roles in adaptation of muscle size: (1) insulin-like growth factor 1 (IGF-1), (2) mechano-growth factor (MGF), (3) basic fibroblast growth factors (bFGF), (4) hepatocyte growth factor (HGF), and (5) myostatin. On overloading muscle in vivo, mRNA expression of these growth factors is increased (Huijing & Jaspers 2005), with the notable exception of myostatin (reduced expression; Heinemeier et al. 2007). Most of these growth factors also play a role in activating satellite cells. Satellite cells are normally quiescent, but exposure to MGF, FGF or HGF initiates proliferation by cell division (Huijing & Jaspers 2005). In contrast, myostatin inhibits satellite cell proliferation (Huijing & Jaspers 2005). Activation of satellite cells is important for two reasons: (1) for repair of overload-induced myofiber damage, activation of satellite cells will provide new nuclei to replace degraded ones within the damaged myofiber parts; and (2) the number of nuclei within a myofiber may be the factor limiting the maximal capacity for mRNA transcription (Huijing & Jaspers 2005). However, some hypertrophy and addition of sarcomeres due to enhanced transcription and/or translation is possible without adding new nuclei (Petrella et al. 2008). 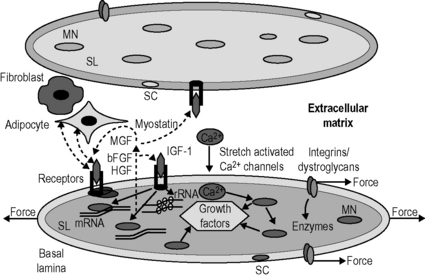 Fig. 8.4.1 • Schematic representation of the mechanochemical signaling pathways involved in the regulation of myofiber size.
Two adjacent myofibers are shown, which are surrounded by their sarcolemma (SL) and a basal lamina (BL). The muscle fibers are anchored to the collagen fiber reinforced extracellular matrix by the integrin and dystroglycan/sarcoglycan complexes. Mechanical loading is sensed at these complexes at the myotendinous junctions of the myofibers as well as along the length of the myofiber. Loading of these complexes elicits cascades of signaling molecules (i.e., free radicals and enzymes). Another mechanosensor is the stretch activated calcium (Ca2+) channel, which allows calcium influx into sarcoplasm. In addition to its role in the contraction, calcium also regulates the activity of particular transcription factors. Transcription factors may alter deoxyribonucleic acid in the myonucleus (MN) and affect the synthesis of muscular proteins directly or indirectly via expression of growth factors, which are released in the interstitial space (i.e., extracellular matrix). Several growth factors have been identified to be expressed within muscle, which likely play a major role in muscle adaptation. Among these are the insulin-like growth factor 1 (IGF-1), mechanogrowth factor (MGF), fibroblast growth factor (FGF), hepatocyte growth factor (HGF) and myostatin. Once released, these growth factors can bind to receptors in the membrane of the producing myofiber and stimulate signaling pathways that modulate the rate of transcription of DNA as well as the rate at which the ribosomal RNA (constituting the body of the ribosome) translates the mRNA into protein. The growth factors may bind to receptors in the membrane of the fiber that releases these factors as well as of its host satellite cells (SC), neighboring myofibers and/or other cells such as fibroblasts and adipocytes.

Tags: Fascia The Tensional Network of the Human Body The science and c
Aug 24, 2016 | Posted by admin in ORTHOPEDIC | Comments Off on Roles of fascia in molecular biology of adaptation of muscle size
Premium Wordpress Themes by UFO Themes
WordPress theme by UFO themes