Classifications of Porphyria,
Signs and Symptoms of Hepatic Porphyrias,

Until recently, porphyrias have been considered rare. It has only been within the past decade or so that an increasing number of patients have been diagnosed with these disorders, leading some clinicians to question their prevalence. Although allopathic medicine offers therapies that are effective in treating them, naturopathic medicine possesses a considerable array of therapeutic modalities that are effective in combating these diseases and preventing their recurrence.

Porphyria as a disease was first described three centuries ago by Sir Theodore Turquet de Mayerne of France, physician to the English court of King James I. He described accounts of paralysis, bilious urine, colic, insanity fits, permanent insanity, deaths at childbirth, and premature death in those afflicted. The disease probably afflicted King George III of England and was thought to have impaired his judgment during the American Revolution.1

In 1911, Günther described what is now known as the classic triad of abdominal pain, constipation (or diarrhea), and vomiting. Waldenström later added to the understanding of these diseases by describing acute intermittent porphyria (AIP) as characterized by periods of exacerbation and remission.2

Various classifications of porphyria were arrived at as greater recognition of their variations occurred. Genetic and environmentally induced manifestations of the disease were found, with considerable variations in the clinical presentations of the different forms.

The genetic deficits of porphyria affect all tissues but primarily the blood-forming tissues of the bone marrow and the cytochrome P-450 system in the liver because of the greater number of porphyrin precursors required. The liver is the major site where inherited or acquired deficits in heme synthesis occur.3

Porphyrias are classified as being either hepatic or erythropoietic in origin. In both classes they are characterized by the overproduction of porphyrin or their precursors. Biosynthesis of heme is controlled differently in liver and bone marrow, with the rate-limiting enzyme in liver being aminolevulinic acid (ALA) synthase, whereas the biosynthesis of heme in the bone marrow is partly regulated by the uptake of iron.

Acute hepatic porphyrias are characterized by a rapid onset of symptoms that are largely neurologic; the erythropoietic variety manifests primarily in the skin, leading to cutaneous photosensitivity (Box 200-1).

Signs and Symptoms of Hepatic Porphyrias

Acute attacks are comprised of a wide variety of symptoms, ranging from skin lesions to abdominal pain to neurologic manifestations of varying intensity. Abdominal, back, or extremity pain grows in intensity over a 24- to 48-hour period, which may lead the clinician to consider appendicitis or an acute abdomen. Rebound tenderness is not usually present.

Nausea and vomiting are frequently seen, as are anxiety and restlessness. Often these patients have some degree of constipation that worsens as the condition develops. Tachycardia may also be present, suggesting an infectious process or increased bowel toxicity.

In general the severity of the symptom pattern seems to the clinician to be out of proportion to the manifesting signs. It is thought that the bowel symptoms are due to a neurologic disturbance of normal function.

Mental abnormalities can range from confusion to acute psychosis and may be the first presentations of an attack. With prolonged attacks, sensory and motor functions are impaired and can result in respiratory paralysis and death.5 Many patients are diagnosed with schizophrenia, and a considerable number confined to mental institutions are thought to be afflicted with one of the porphyrias.6,7

The majority of carriers are usually asymptomatic except when they are exposed to drugs or chemicals that exacerbate the condition. Neurologic symptoms and the sequelae of an acute or prolonged attack can take months to clear, but eventual recovery occurs in the majority of cases.

The biosynthesis of heme is the main purpose of the porphyrogenic pathway. Heme, a high-molecular-weight metalloprotein, is a member of a group of chemicals that include cytochromes (oxidation/reduction reactions), chlorophyll (photosynthesis), and vitamin B12. Heme is formed from succinyl coenzyme A (CoA) and glycine; after being combined with globin chains, it is ultimately involved in aerobic metabolism. These globin chains are synthesized on the ribosomes in the plasma of the developing erythrocyte. In the liver, heme production is largely used for the production of cytochrome P-450 in response to the body’s need to eliminate toxic substances. Heme synthesis begins and ends in the mitochondrion, with part of it occurring in the cytoplasm. All tissues form heme, but the primary sites are the bone marrow and liver.

The rate-limiting enzyme for heme synthesis is ALA synthase, which is the initial enzyme in the cascade. ALA synthase requires vitamin cofactors and energy input. All other reactions in the sequence are the result of thermodynamics and are irreversible once initiated.

ALA synthase is regulated by a feedback mechanism that is responsive to the tissues’ demand for heme production. With the formation of uroporphyrinogen, branching occurs and results in different porphyrin isomers. Isomer I proceeds only as far as coproporphyrin I and normally is considered inconsequential. Isomer III results in the formation of uroporphyrinogen III, which undergoes modification to render it more lipophilic so that it can be excreted from the body. Thus, most of the pathway favors heme production.

Final heme formation is regulated by the action of ferrochelatase in the mitochondria. Reducing substances such as ascorbic acid, cysteine, or glutathione are required. Iron must be in the ferrous rather than ferric form. Ferrochelatase activity is inhibited by high concentrations of heme. Thus, the feedback system prevents further formation. Heme concentration also feeds back on ALA synthase, the rate-limiting step in the biosynthetic pathway.

Because heme formation is essential for aerobic metabolism, its absence would be lethal. Therefore, multiple control systems have evolved to regulate the metabolic pathway, which has made it difficult to elucidate the exact mechanism of the deficit, be it genetic or acquired. Recent advances in identifying specific DNA encoding the heme biosynthetic enzymes, however, has resulted in a more precise diagnosis of the specific genetic deficit.

Red blood cell (RBC) incorporation of heme, iron, and glycine occurs in maturing cells up through and including reticulocytes but is eventually lost as the red cell ages. Hypoxia and erythropoietin will increase ALA synthase activity in RBCs but not the liver, whereas drugs and chemicals will affect the liver but not erythropoietic tissues. Figure 200-1 illustrates heme synthesis and porphyria. 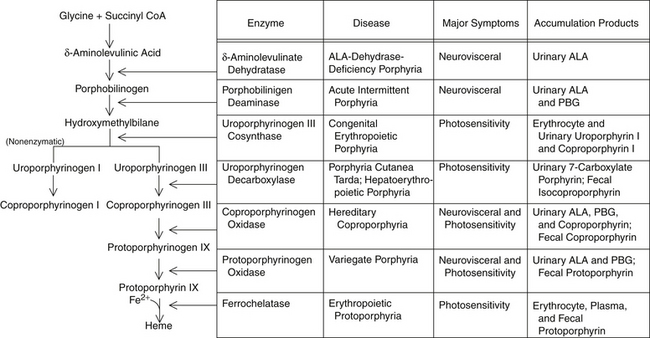 FIGURE 200-1 The heme synthesis and porphyria.

In patients with porphyria, specific genetic or acquired deficiencies limit the flow of heme precursors through the cascade of steps needed to form hemoglobin. The deficiency can become manifest owing to an increased demand for heme precursors. Certain drugs, chemicals, steroids, estrogens, oral contraceptives, progesterone, testosterone, or any substance that places an excess burden on the cytochrome P-450 system can act to precipitate an acute attack. This results from the partial removal of the feedback mechanism on delta-ALA synthase. Depending on the specific enzyme deficit present, heme precursors follow different pathways resulting in their accumulation in the tissues. Their presence affects the skin and nervous system and manifests as the signs and symptoms of the disease.

Attacks occur more frequently in women than men, especially premenstrually. As the person ages, the likelihood of exposure of an underlying porphyria deficit increases because of increased exposures to environmental toxins and the aging body’s decreasing ability to adapt.

Cutaneous manifestations occur because some porphyritic precursors absorb light at 400 nm, resulting in photosensitivity. The absorption of light raises the potential energy of the molecule to an “excited” state, resulting in a highly reactive oxygen species. The release of histamine and proteolytic enzymes then results in oxidative damage. Beta-carotene protects against these injuries.3,4,8

Neuropsychiatric changes occur in the hepatic porphyrias (ALA-dehydrase-deficiency porphyria, AIP, porphyria cutanea tarda, hereditary coproporphyria, and variegate porphyria) with excess production of ALA and porphobilinogen (PBG), and there is a somewhat linear relationship between their concentration and the severity and duration of symptoms. A buildup of porphyrin intermediaries has been found in various tissues and may induce the neuropsychiatric symptoms accompanying acute flareups.9,10 The exact mechanism whereby porphyrins affect the central nervous system is not well understood.

Patients with familial porphyria cutanea tarda (PCT) usually present at a younger age than those who develop PCT spontaneously, despite the fact that there is no difference in the biochemical features of the disease.11 This may be because of a corresponding genetic predisposition to sequester ferritin in the liver or an increased sensitivity to ethanol ingestion.11,12 Additionally, even in families with known genetic deficits, manifestations of the disease among family members vary.

Numerous agents that trigger episodes of porphyria have been identified, and patients afflicted must be careful when taking prescription medications, estrogens, and some herbal medicines; they must also avoid environmental exposures to heavy metals, organophosphates, and any substance that places an excess burden on the cytochrome P-450 system. In particular, exogenous estrogens—whether from oral contraceptives, estrogen patches, or estrogen replacement therapy—are strong contributors to an underlying porphyria deficit.13,14 This is one reason why acute attacks of porphyria are seen more often in women than men, especially premenstrually. Additionally, some studies have suggested that estrogens enhance the porphyrin-inducing activities of other agents, making women more vulnerable to environmental exposures than their male counterparts.15,16

Herbicide-induced porphyria has been shown to decrease the activity of several enzymes involved in the porphyritic pathway as well as to increase the porphyrin content in nerve tissue.16,17 A considerable number of chemicals have also been linked to porphyria or porphyrinuria in humans; these generally involve chronic industrial exposures or environmental exposures. An example of an epidemic of PCT produced by the accidental ingestion of wheat treated with the fungicide hexachlorobenzene occurred in Turkey in the 1950s.

Some researchers have hypothesized that several otherwise unexplained chemical-associated illnesses such as multiple chemical sensitivity syndrome (MCSS) may represent mild chronic cases of porphyria or other acquired abnormalities in heme synthesis.18,19

According to William Morton, who has written extensively on porphyrias, MCSS as first described by Cullen in 1979 may, in fact, be porphyria. Morton speculates that exposures to porphyrogenic chemicals, medications, or severe infection overpower the already deficient enzyme system, resulting in an accumulation of the specific porphyrin because of diminished enzyme function. He proposed that the resultant symptoms are due to an increase of the porphyrinogen and not an accumulation of the toxin itself. Many diagnosticians have tried to expedite the distinction between “real” porphyria and secondary porphyrinopathies by requiring that a porphyria diagnosis be based on urinary or fecal porphyrin excretions or both 2 to 20 times the upper limit of normal. This classification would exclude individuals demonstrating lesser degrees of porphyrinogenic activity, possibly some of those whose conditions are in remission or not subject to environmental exposures.20

The intensity of porphyria symptoms varies widely. About 10% of the cases present with acute severe attacks, whereas approximately 25% are seen with chronic symptomatology of varying degrees. The remaining percentage (65%) present with no symptoms but may become susceptible under the right circumstances.21

Not all researchers agree with Morton’s and others’ premise that environmental toxicities induce underlying genetic deficits leading to symptomatic porphyria. According to Hahn and Bonkovsky, “patients with multiple chemical sensitivity syndrome may, at times, have modest increases in urinary coproporphyrin excretion; this is a common finding found in many asymptomatic subjects or patients with diverse other conditions (e.g., diabetes mellitus, heavy alcohol use, liver disease, and many kinds of anemia). Such secondary coproporphyrinuria does not indicate the existence of coproporphyria.”22

Regardless of which view is correct, an increasing number of cases are being diagnosed by clinicians. Certainly, with the increasing levels of pollutants in the environment, hormonal additives to the food chain, and the unmonitored multiple pharmacy prescriptions encountered by most humans, the potential for unmasking an underlying deficit increases.