MEASUREMENT of RANGE of MOTION of the HIP

MEASUREMENT of RANGE of MOTION of the HIP

The hip is a ball-and-socket joint that consists of an articulation between the convex head of the femur and the concave acetabulum of the pelvis, or hip bone (Fig. 11-1). All three bones that make up the pelvis (ilium, ischium, and pubis) contribute to the acetabulum, which provides a deep, cup-shaped receptacle for the spherically shaped femoral head. A fibrocartilaginous rim, the acetabular labrum, attaches to the margin of the acetabulum, further increasing its depth.4,25 Thus the hip, unlike the glenohumeral joint, has a great deal of inherent bony stability and is less dependent on muscular and ligamentous structures for support. The articular capsule of the hip joint is strong and is crossed by three ligaments that provide additional reinforcement. The iliofemoral ligament is shaped like an inverted Y and reinforces the anterior joint capsule (Fig. 11-2). The stem of the iliofemoral ligament is attached to the anterior inferior spine of the ilium, and its two branches are attached along the whole length of the intertrochanteric line of the femur.4,25 The pubofemoral ligament lies along the medial and inferior part of the joint capsule, running from the superior ramis of the pubis and the pubic portion of the acetabular rim to the neck of the femur (see Fig. 11-2). Reinforcing the posterior aspect of the joint capsule is the ischiofemoral ligament (Fig. 11-3). This ligament arises from the ischial portion of the acetabulum and spirals upward across the posterior aspect of the femoral neck to insert into its superior aspect, just medial to the root of the greater trochanter.9,21,25 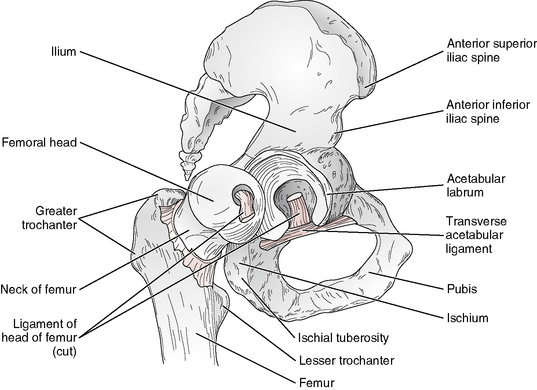 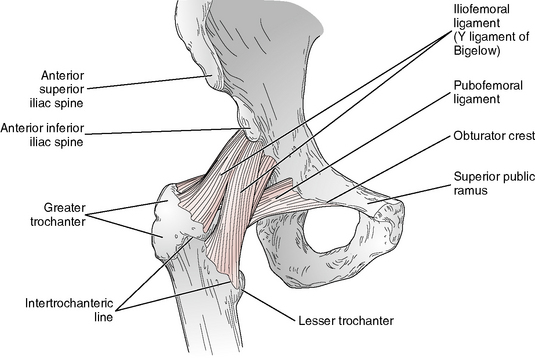 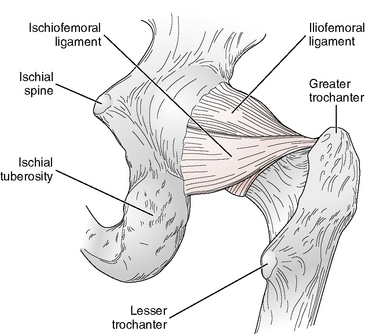 Movement at the hip, which occurs in all three of the cardinal planes, consists of flexion, extension, abduction, adduction, medial rotation, and lateral rotation. These motions may be achieved by movement of the femur on the pelvis or by movement of the pelvis on the femur. The pelvic movements of anterior and posterior tilting produce flexion and extension of the hip, respectively. Tilting of the pelvis laterally produces hip adduction on the high side and hip abduction on the lower side of the pelvis. Rotation of the pelvis in the transverse plane results in lateral rotation of the hip ipsilateral to the more anteriorly displaced pelvis and medial rotation of the contralateral hip. An additional motion, circumduction, has been described as occurring at the hip joint. This motion is a sequence of flexion, abduction, extension, and adduction and is not normally measured with a goniometer.4,19,28

Most of the motions at the hip are limited by the ligaments (iliofemoral, ischiofemoral, and pubofemoral) and muscles that surround the joint, as well as by the hip joint capsule. The primary exception to this rule is hip flexion, which frequently is limited by approximation of the soft tissue between the anterior thigh and the abdomen when the knee is flexed. Hip flexion and extension range of motion are dependent on the position of the knee during movement. Full hip flexion is obtained only with the knee flexed. If the hip is flexed with the knee extended, tension in the hamstring muscles limits the motion. Likewise, full hip extension requires that the knee is extended, and in this position, motion is limited by tension in the iliofemoral ligament.4,9 Extending the hip with the knee fully flexed typically decreases the available hip extension range of motion subsequent to tension in the rectus femoris muscle.

Several studies investigating motion of the hip joint during functional activities are described in the literature. Research has involved the examination of a variety of functional activities, including walking on level surfaces,15,29,30,32,36 ascending and descending stairs,16,20,31 sitting onto and rising from a chair (Fig. 11-4),13,16,37 lifting an object from the floor, tying a shoe (Fig. 11-5),16 and transitioning from a kneeling to a standing position.38 A few authors also have examined hip motion in so-called high range of motion activities such as kneeling, squatting, and sitting cross-legged (Fig. 11-6).12,16,17,26 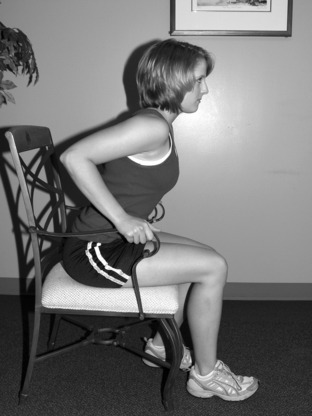 Fig. 11-4 Hip ROM needed to rise from a seated position. 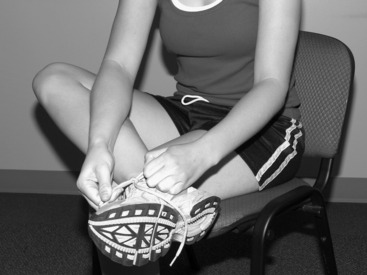 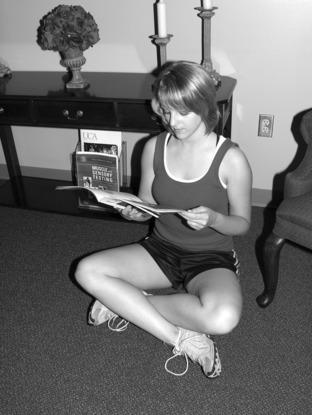 A summary of hip range of motion as it relates to various functional activities is located in Table 11-1. Most of the studies from which data were derived were performed in healthy adults, although some investigations included elderly and pediatric subjects. Essentials of the study populations and instrumentation used are included in the table. Caution should be used in extrapolating these data to the general population because the sample sizes for all studies were small. For more in-depth information on each study, the reader is referred to the reference list at the end of this chapter. 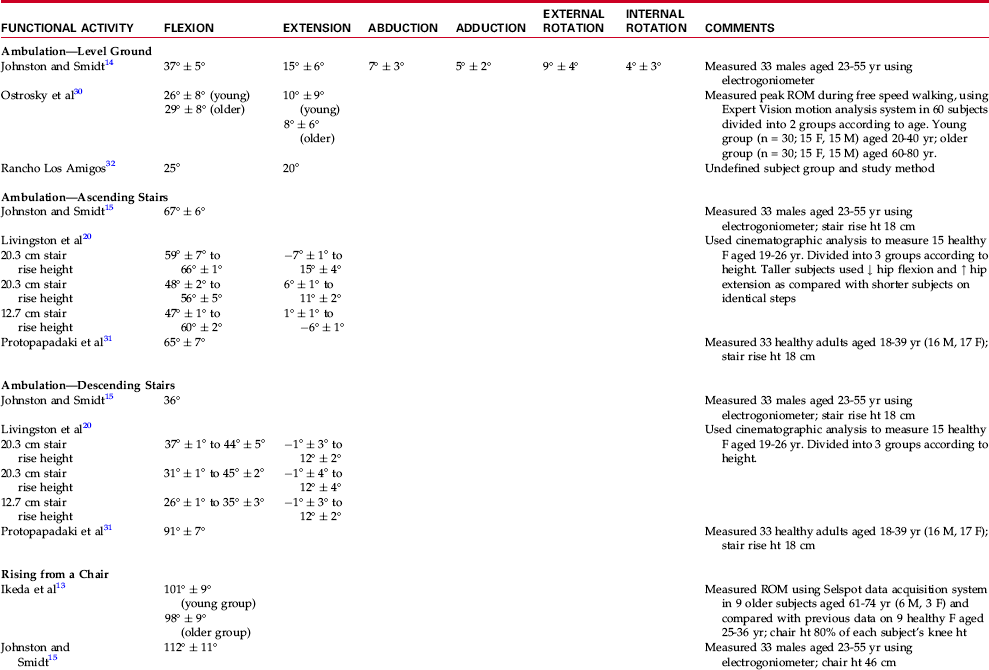 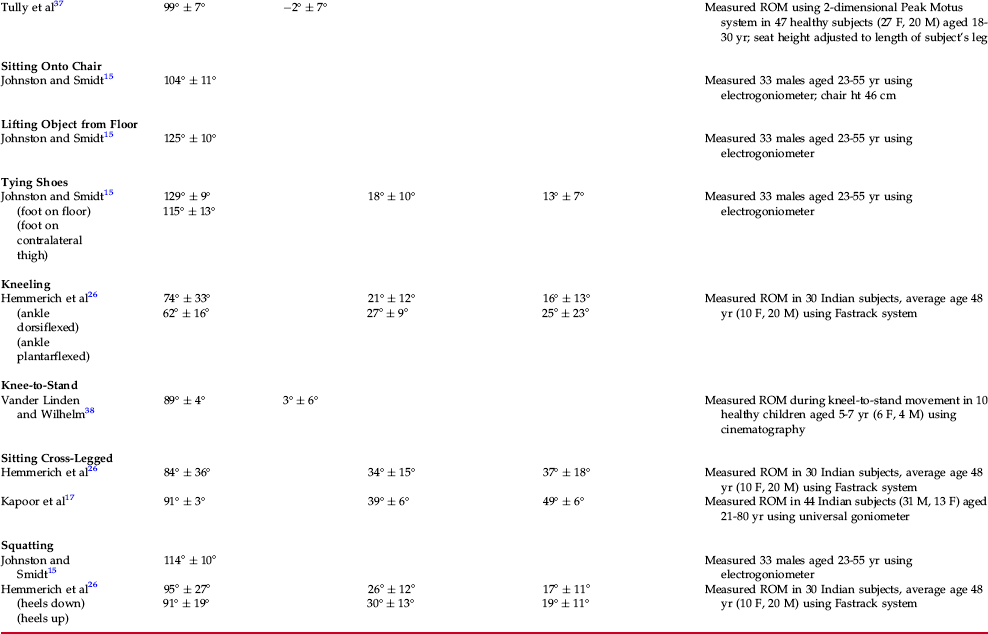 A variety of techniques have been employed to measure hip flexion. Measurements have been taken with the patient in the supine position with the contralateral hip flexed or extended (Figs. 11-7 and 11-8)1,10 and with the patient in a side-lying position, using the Mundale27 (Fig. 11-9) or the pelvifemoral angle technique22 (Fig. 11-10). These techniques vary in terms of patient positioning, specific landmarks used for goniometric alignment, and the degree to which each method controls for pelvic motion. Values for the normal maximum amount of hip flexion that are provided in the literature vary widely (see www.wbsaunders.com/SIMON/Reese/joint/). Such discrepancies in standards for the normal hip appear to be caused by the technique used and the degree to which each of the different techniques controls for pelvic motion. Of the techniques provided in the preceding list, the one recommended by the American Academy of Orthopaedic Surgeons (AAOS) and the American Medical Association (AMA) places the least emphasis on controlling pelvic motion.1,10 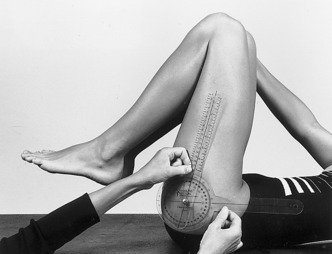 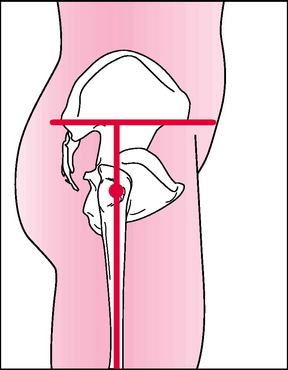 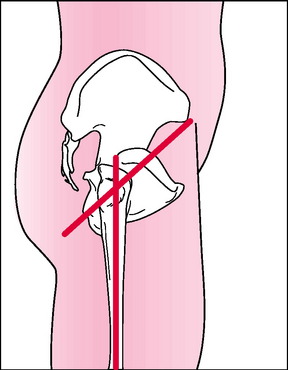 Motions of the pelvis on the lumbar spine during measurement of hip flexion or extension can artificially inflate the range of motion measurement obtained. To control for this phenomenon, one should use landmarks on the pelvis to eliminate the possibility of including lumbar spine motion in the measurement, or one should manually ensure that the pelvis remains in a neutral position at the beginning and end of the range of motion measurement. The neutral position of the pelvis has been described as the position in which a line drawn through the anterior superior iliac spines (ASIS) and the symphysis pubis is vertical and lies in the frontal plane.18,35 With the pelvis in this position, a line connecting the anterior and posterior superior iliac spines of the pelvis is horizontal and lies in the transverse plane.19

Other techniques recommended for measuring hip flexion and extension use landmarks on the trunk or the examining table for alignment of the stationary arm of the goniometer.1,10,24 The danger in using these landmarks is the possibility that lumbar motion may be included in measurements of hip motion, thus creating unreliable goniometric measurements. However, if the pelvis is maintained in a neutral position (see the previous description), then a line through the midline of the trunk will parallel a line connecting the ASIS and the pubic symphysis, thus providing a reliable reference for the stationary arm of the goniometer. The use of such a reference is advantageous because it allows the patient to be placed in a supine (flexion) or a prone (extension) position during the measurement, thus providing greater stability of the pelvis. Additionally, the need for marking lines on, or taping, the patient is avoided. Whenever landmarks on the trunk are used for alignment of the goniometer’s stationary arm, extreme care must be taken, as indicated previously, to maintain the pelvis in a neutral position through manual monitoring of pelvic motion and patient positioning. Both the AAOS and the AMA direct that the patient’s contralateral hip should be flexed during measurements of ipsilateral hip flexion1,10; however, maintaining the contralateral thigh against the examining table is necessary to minimize pelvic motion during the measurement.18 Therefore, the technique of measuring hip flexion described in this text recommends extension of the contralateral hip during the measurement.

Measurement of hip extension range of motion also can be accomplished using the Mundale and pelvifemoral angle techniques. Additionally, the AAOS describes two methods of measuring hip extension, both of which use a proximal goniometer alignment that is parallel to the tabletop and to a line through the lateral midline of the trunk.10 The patient is placed in the prone position for both AAOS techniques; the only difference in the two techniques is that the patient’s contralateral hip is extended in one technique and is flexed over the end of the examining table in the other. Some examiners also use the Thomas technique (used for measuring hip flexion contracture; see Chapter 14) to measure hip extension.2 In a comparison of four of these techniques, Bartlett et al2 reported the highest intrarater and inter-rater reliabilities for the AAOS (contralateral hip flexed) and Thomas techniques in children with myelomeningocele and spastic diplegia (see Chapter 15). Although the contralateral hip may be extended or flexed during measurements of hip extension range of motion (ROM), fewer patients may have difficulty extending the hip while lying prone than while standing and leaning over an examining table.

Additionally, the amount of motion measured at the hip may differ depending on the measurement tool used. Bierma-Zeinstra and colleagues3 found significantly higher measurements of hip external rotation range of motion when they measured movement with the goniometer as compared with measurements obtained with an inclinometer. Conversely, the inclinometer yielded significantly greater measurements of hip flexion and extension than did the goniometer. Unfortunately, most sources reporting standards for hip rotation range of motion (e.g., AAOS, AMA) do not include descriptions of the position in which rotation of the hip was measured, nor do many describe the instrument used to measure the motion. Available data for normal ranges of hip rotation are reported in Appendix B.

Because there appears to be no difference in the reliability of measurements of hip rotation taken with the hip flexed or extended,34 and because information is mixed regarding whether the inclinometer or the goniometer is most reliable for measuring hip rotation ROM3 the examiner may choose either method or instrument for performing measurements of this motion. However, care should be taken, as always, to use identical techniques whenever repeated measures are taken, in that the amount of motion may vary depending on patient position and the instrument chosen.3,11,34 The techniques described in this text for measuring hip rotation include those in both seated and prone positions with the goniometer and the inclinometer. 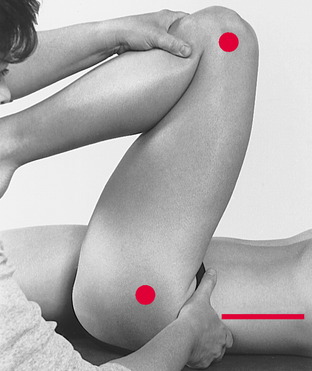 After instructing patient in motion desired, stabilize ipsilateral pelvis with one hand and flex patient’s hip through available ROM with other hand. Ipsilateral knee should be allowed to flex as well. Hip should not be flexed past the point at which pelvic motion begins to occur (as detected by superior movement of ipsilateral ASIS under examiner’s stabilizing hand). Return limb to starting position. Performing passive movement yields an estimate of the ROM and demonstrates to patient exact motion desired (see Fig. 11-12). 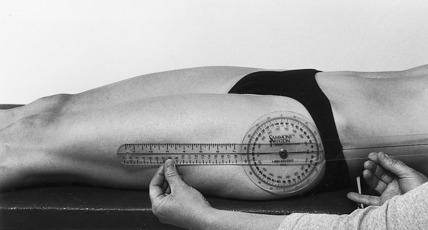 Tags: Joint Range of Motion and Muscle Length Testing
Aug 10, 2016 | Posted by admin in PHYSICAL MEDICINE & REHABILITATION | Comments Off on MEASUREMENT of RANGE of MOTION of the HIP
Premium Wordpress Themes by UFO Themes
WordPress theme by UFO themes