On Flies and Maggots

The Greek philosopher Aristotle (384-322 BC) named the fly “Diptera”. The Greek word “dipteron” means “two-winged”, referring to the single pair of functional wings that distinguish the fly from virtually all other insects. When working on his system of taxonomic classification of living organisms, or Systema naturae, published in the 18th century, Carl von Linné (Linnaeus, 1707-1778) adopted Diptera as the taxonomic name for the order of insects to which all true flies belong.

The origin of the dipterans is unknown. The oldest known fossils date back to the Triassic period and are some 210 to 220 million years old. These relicts mainly consist of the wings of adult flies. Signs of other stages of early fly development are practically non-existent.

The coexistence of flies with humans and domestic animals (synanthropy) has left notable marks in the history of humankind. Flies gained a reputation as pests, parasites, and carriers of harmful diseases. Written records and cult objects surviving from various periods testify to the explosive multiplication of fly populations during wars, famines, and other catastrophes. In all of these periods, people’s attention was most strongly drawn to the seemingly apocalyptic plagues of flies that occurred throughout history.

The historical narratives cited below underline the timelessness and the global impact of the fly problem. The best known reference to plagues of flies is probably that in the Old Testament book of Exodus:

“This is what the Lord says: Let my people go so that they may worship me. If you do not let my people go, I will send swarms of flies on you and your officials, on your people and into the houses. The houses of the Egyptians will be full of flies, even the ground where they are. And the Lord did this. Dense swarms of flies poured into Pharaoh’s palace and into the houses of his officials, and throughout Egypt the land was ruined by the flies.” Exodus 8:20-21 and 8:24, NIV Version, 1984

Fly populations multiply rapidly in warm weather and on corpses. The military physician Ambroise Pare (1510-1590), who reported on the Battle of Saint Quentin (1557), described this phenomenon as follows:

“We saw more than half a league round us the earth all covered with the dead; and hardly stopped there, because of the stench of the dead men and their horses; and so many blue and green flies rose from them, bred of the moisture of the bodies and the heat of the sun, that when they were up in the air they hid the sun. It was wonderful to hear them buzzing; and where they settled, there they infected the air, and brought the plague with them.”

Development Cycle of the Fly

There are over 100 000 species of flies, representing a variety of shapes and sizes (morphology), of habitats, and of behaviors. Yet they all have in common a 4-stage “complete” (holometabolous) metamorphosis, by which they develop through the stages of egg, larva, pupa, and finally adult (Fig. 1). As an example, the blowfly life cycle will be described in more detail. Female flies lay masses of up to 200 eggs, usually on dead bodies and decaying meat, but also on open wounds. Flies have special sensory organs that enable them to immediately recognize decayed flesh that is suitable for feeding and egg laying. The adult female unfurls its ovipositor (Fig. 2) and lays (“blows”) hundreds of its eggs on the meat. Hence the name blowfly. 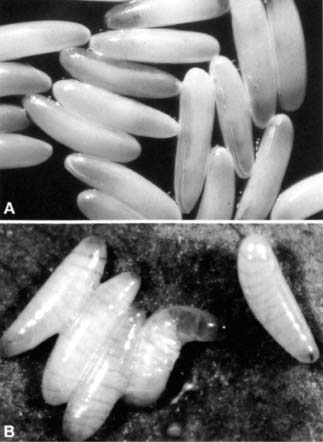 A female fly can lay up to 3 000 eggs in her lifetime. The number of eggs laid is determined by the size of the female and by the quality and quantity of food she consumes. On a protein-rich diet, a female fly may start to lay eggs as soon as five days after emerging from the pupal case. The time required for egg and larval development is mainly determined by ecological factors, such as environmental temperature and humidity. Fly eggs generally hatch into maggots in 12 to 24 hours, the maggots mature to pupae approximately one week later. Normally pupae transform into adult flies within one to three weeks; but under unfavorable conditions, it can take weeks or even months for this process to occur. 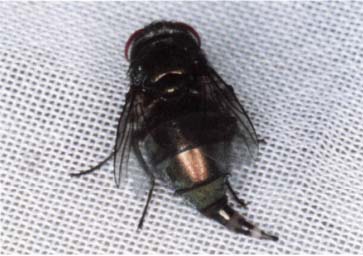