Fractures of the Tibia/Fibula


5 Fractures of the Tibia/Fibula

The tibia is a large weight-bearing bone, located on the anterior and medial side of the leg. The proximal end of the tibia extends laterally to form the medial and lateral tibial plateaus that articulate with the femoral condyles. Both plateaus slope posteriorly ~ 10°. The medial plateau possesses higher mechanical strength and is better suited to withstand compression than the lateral plateau. The body of the tibia has three borders and three surfaces. It is sinuous and prominent in its upper two-thirds, but smooth and recessed below. The anterior border begins above at the tuberosity and ends below at the anterior margin of the medial malleolus. Tibia fractures are most often found at the junction of the middle and lower thirds of the bone, where tibial dimensions change. The fibula is situated on the lateral side of the tibia, to which it provides a small amount of support. The fibular head and distal third of the fibula are just beneath the skin’s surface, with the remaining parts attached by muscles and ligaments. The medial malleolus of the tibia and the distal end of the fibula, along with the talar articulations, form the ankle mortise. The continuity of the fibula is very important in maintaining the stability of the ankle mortise (Plate 5.1). 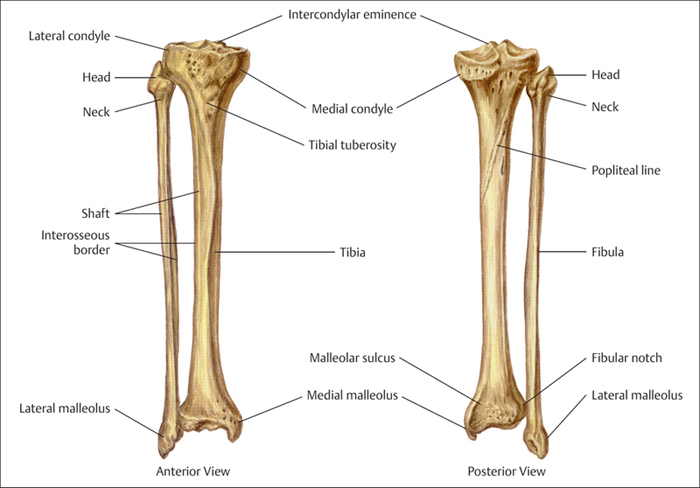 Based on AO classification, the tibia and fibula can be considered as one unit, with the coding number “4.” According to the “Heim’s square” method, the anatomic assignment of the proximal, shaft, and distal portions are the numbers “41, 42, and 43,” respectively. Malleolar fractures are the exception to the rule of dividing each long bone into three bony segments based on their anatomic characteristics. They are segment 44 of the tibial bone (Plate 5.2). 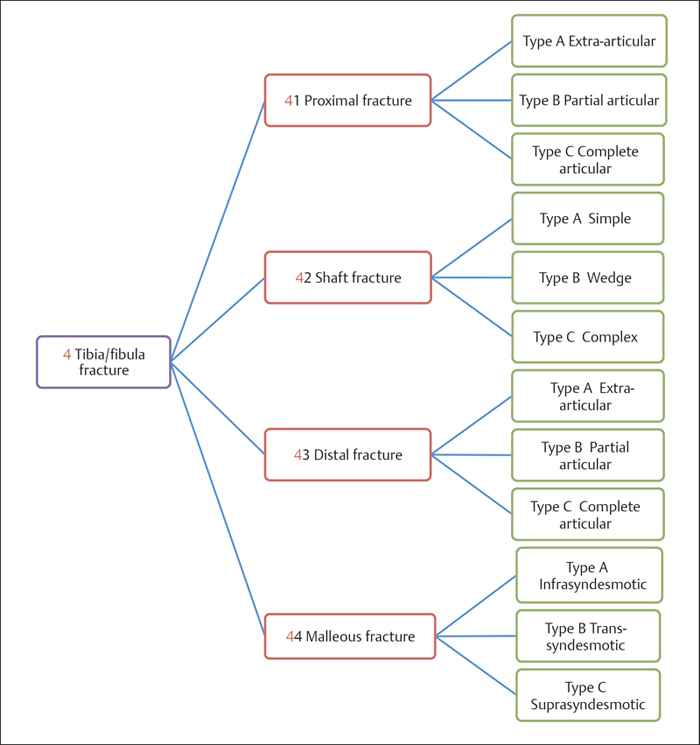 Epidemiologic features of tibia/fibula fractures are as follows:

• fracture of the tibia shaft is the most common tibia/fibula fracture.

Tibia/Fibula Fractures by Injury Side

Table 5.2 Injury side distribution of 11555 patients with tibia/fibula fractures

Fig. 5.2 Injury side distribution of 11555 patients with tibia/fibula fractures. 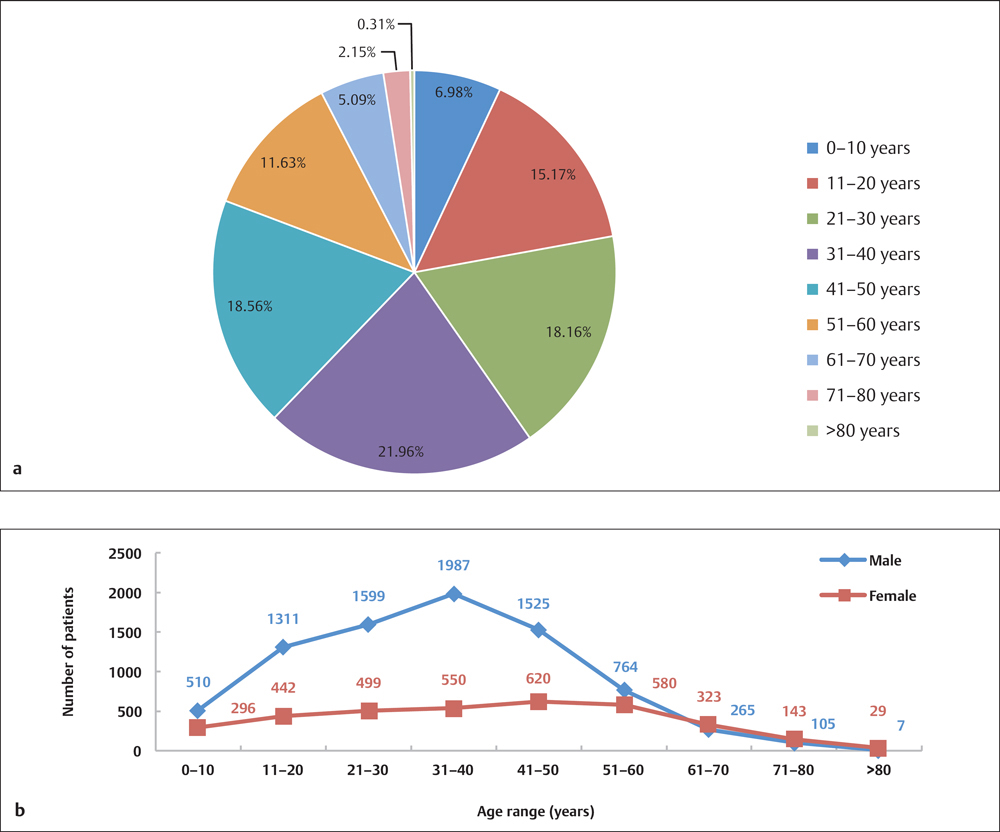 Segment Distribution of Tibia/Fibula Fractures in Adults by AO Classification

Table 5.4 Segment distribution of 10234 tibia/fibula fractures in adults based on AO classification

Fig. 5.4 Segment distribution of 10234 tibia/fibula fractures based on AO classification.

The two tibial plateaus are separated by the intercondyloid eminence, with its prominent medial and lateral tubercles, so-called tibial spines, where the anterior and posterior cruciate ligaments attach. The region of the tibial spines is extra-articular; therefore, there is no coverage by articular cartilage (Plate 5.3). 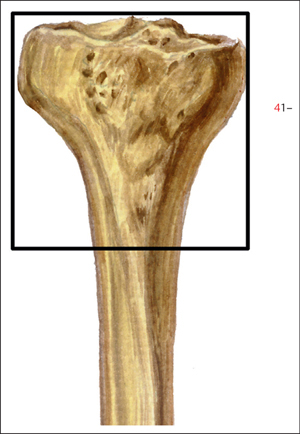 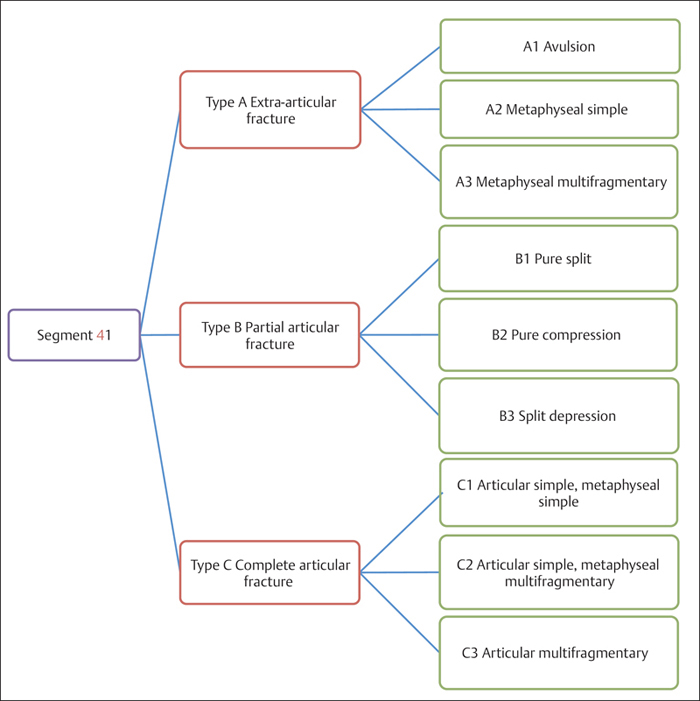 A total of 1909 adult fractures of the proximal tibia/fibula were treated at our trauma center over a 5-year period from 2003 to 2007. All cases were reviewed and statistically studied; the fractures accounted for 18.65% of all tibia/fibula fractures in adults. Their epidemiologic features are as follows:

Fractures of Segment 41 by Sex

Fractures of Segment 41 by Age Group 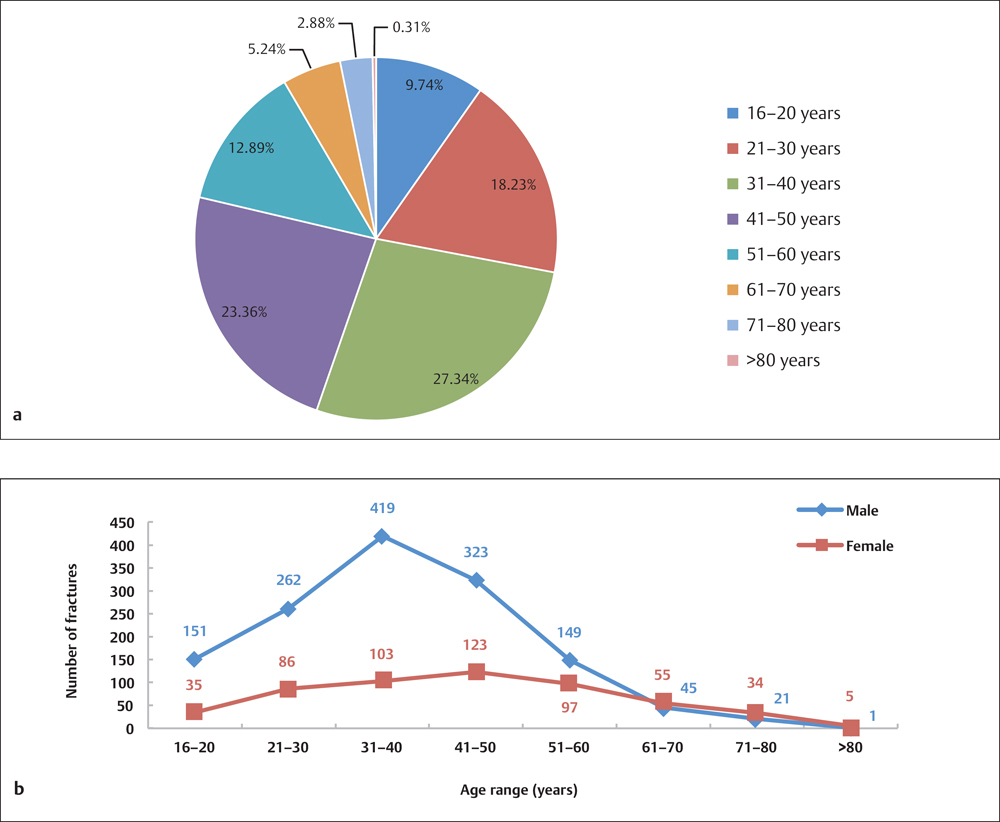 Fractures of Segment 41 by Fracture Type 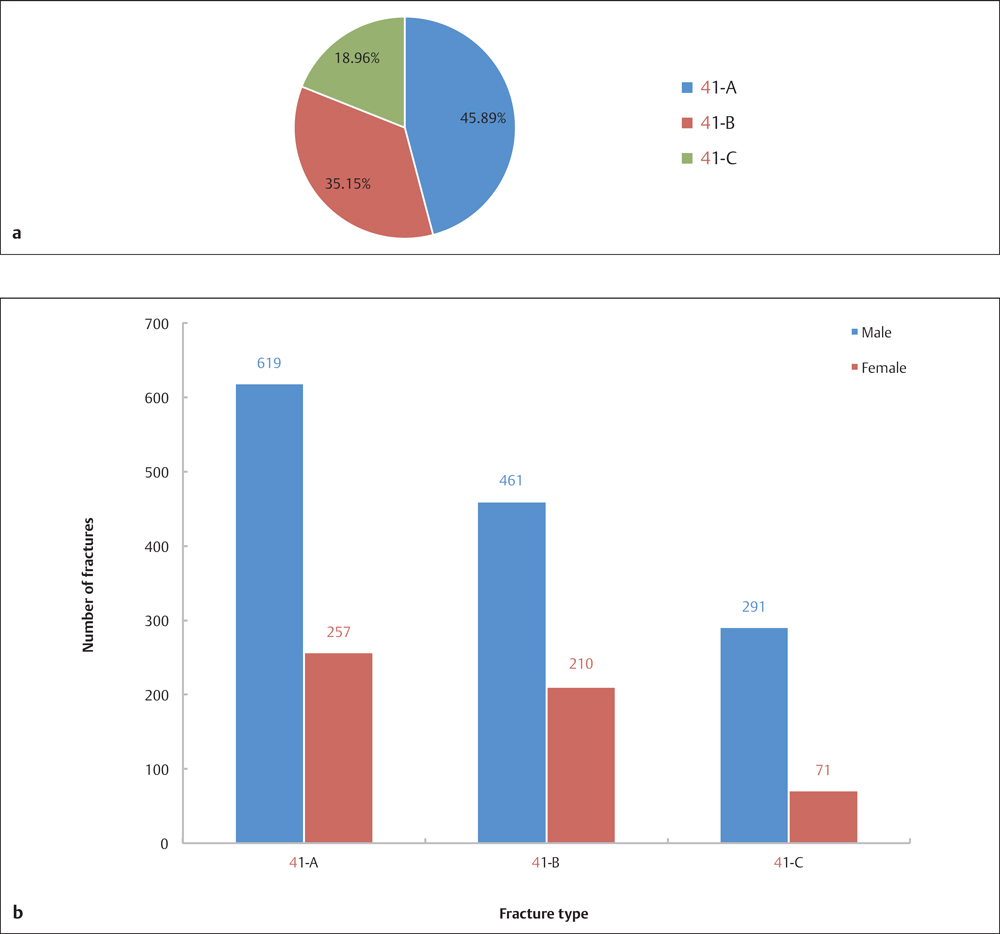 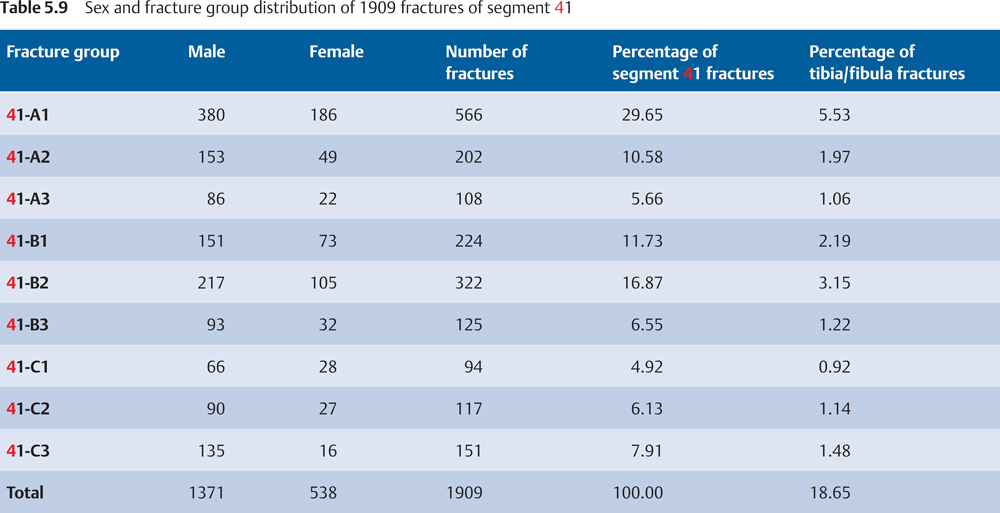 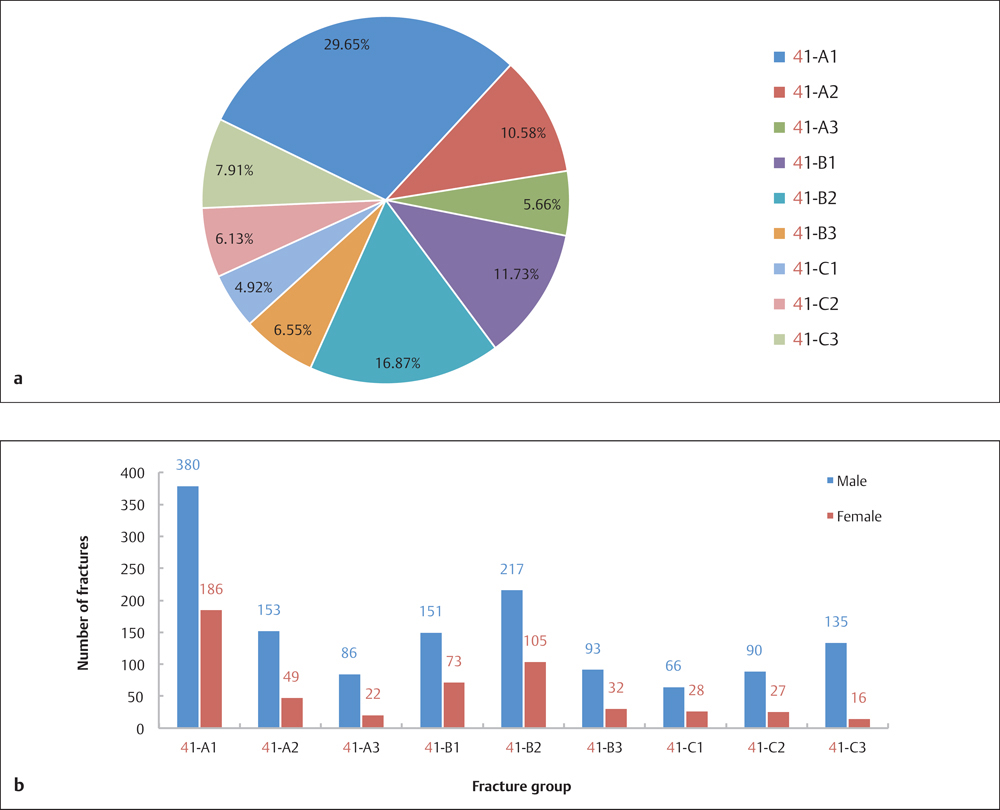 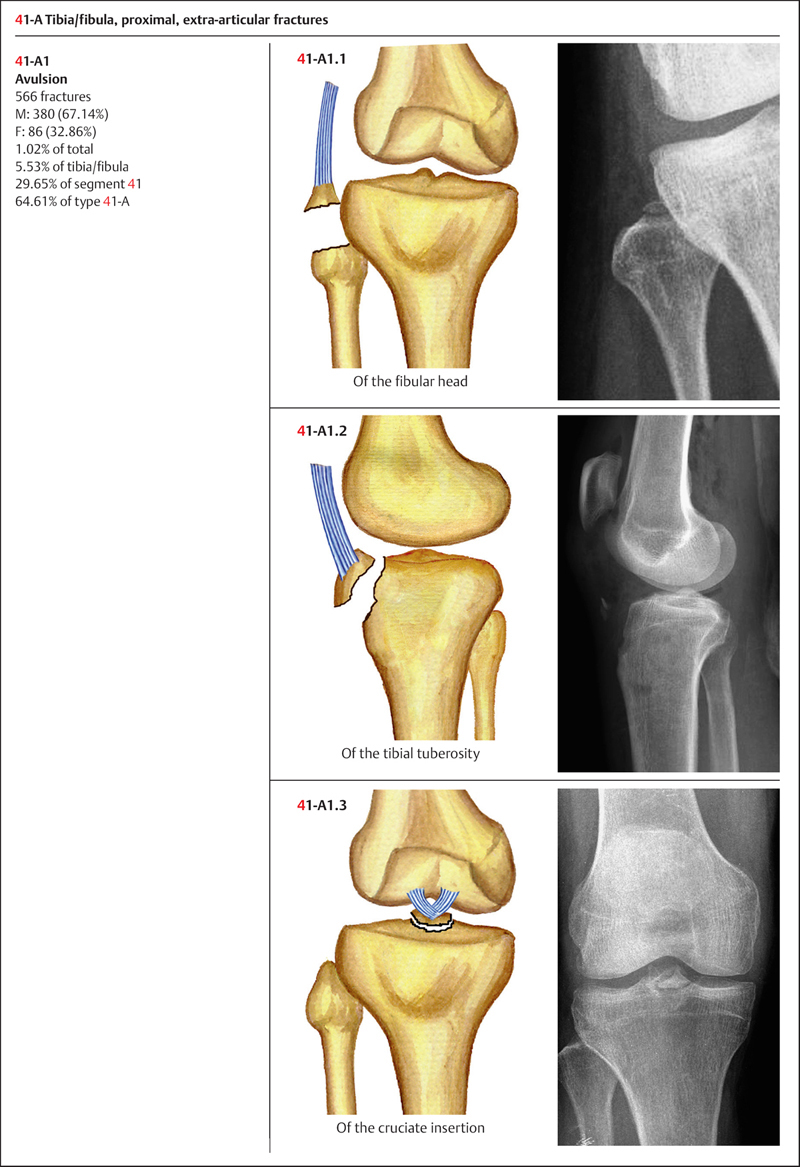 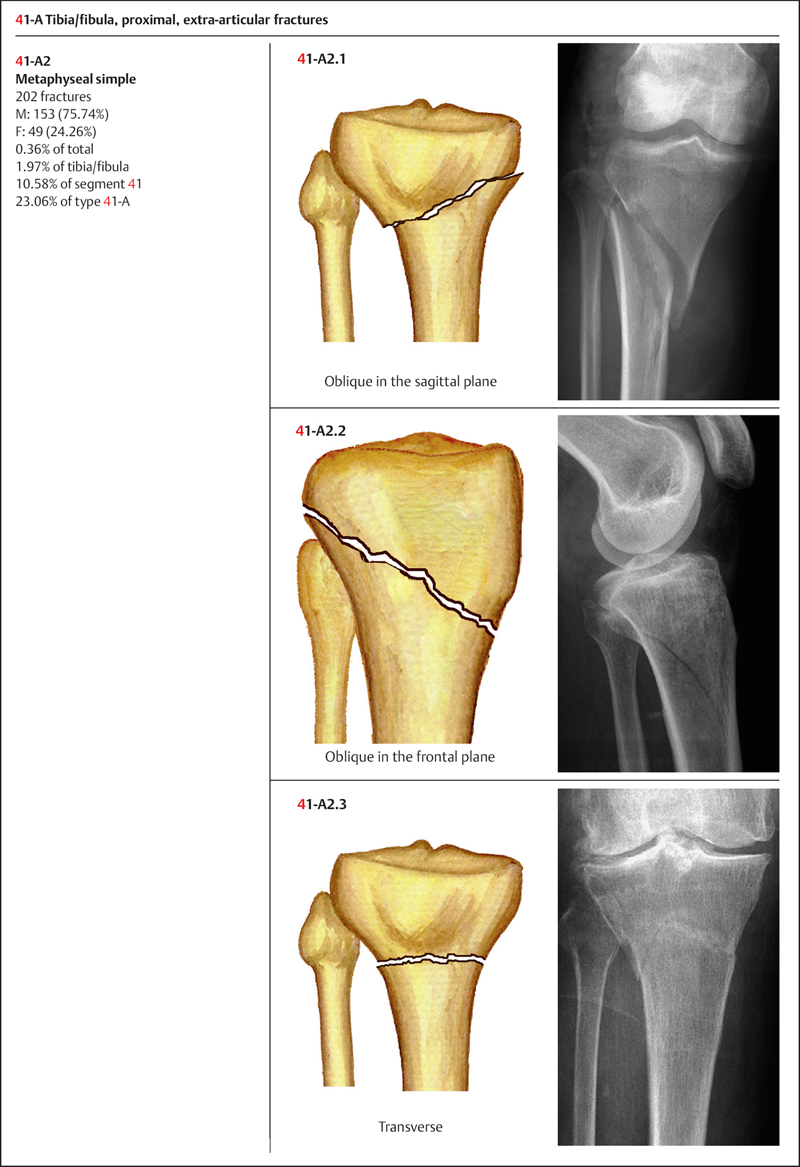 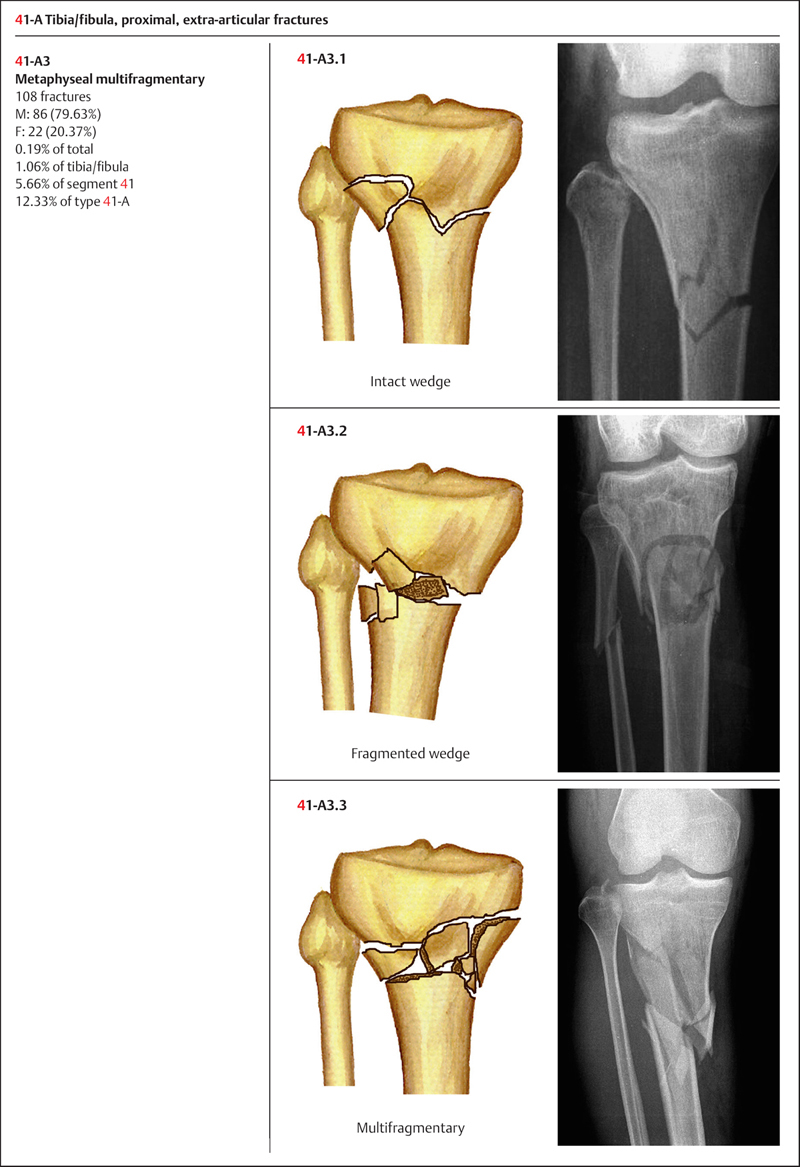 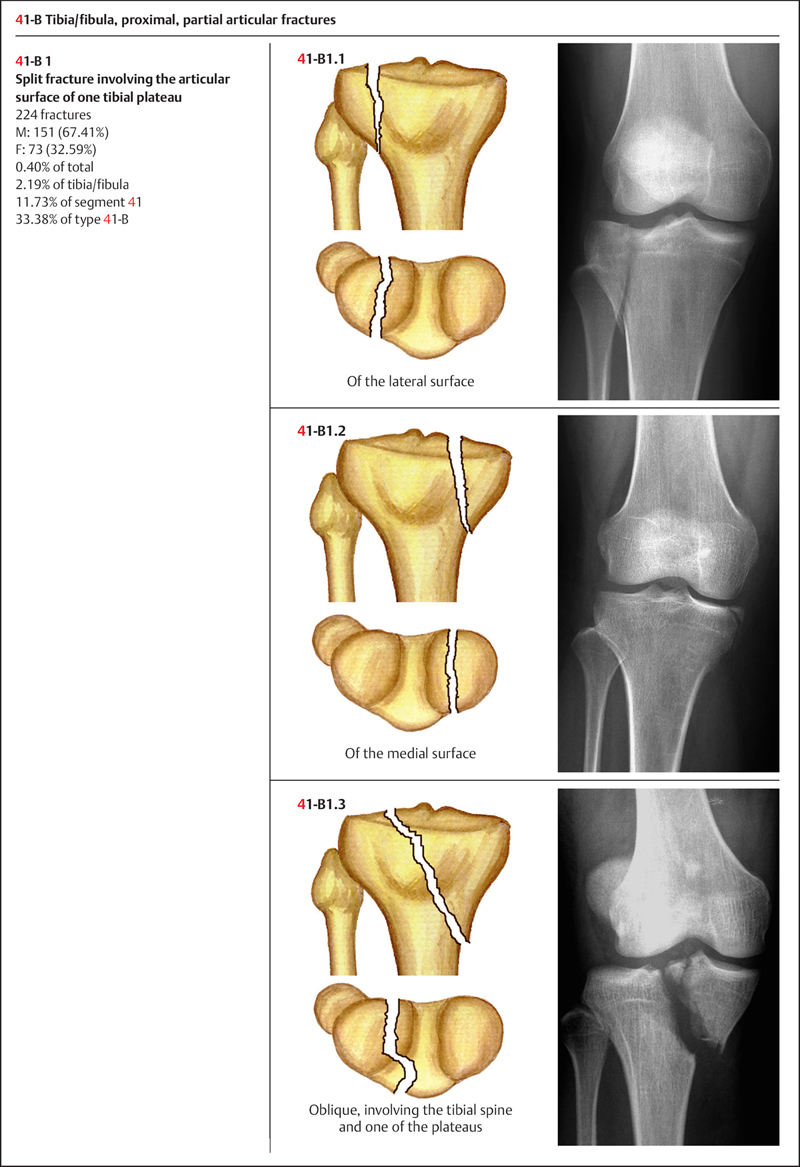 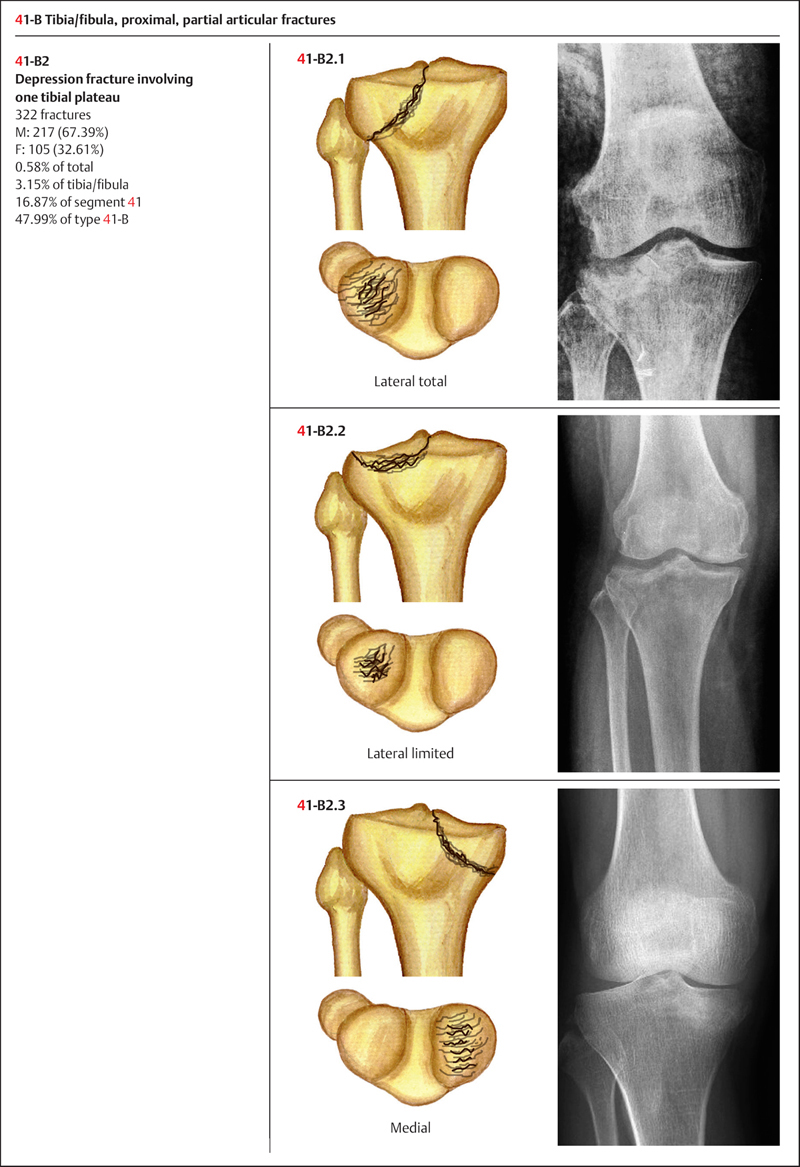 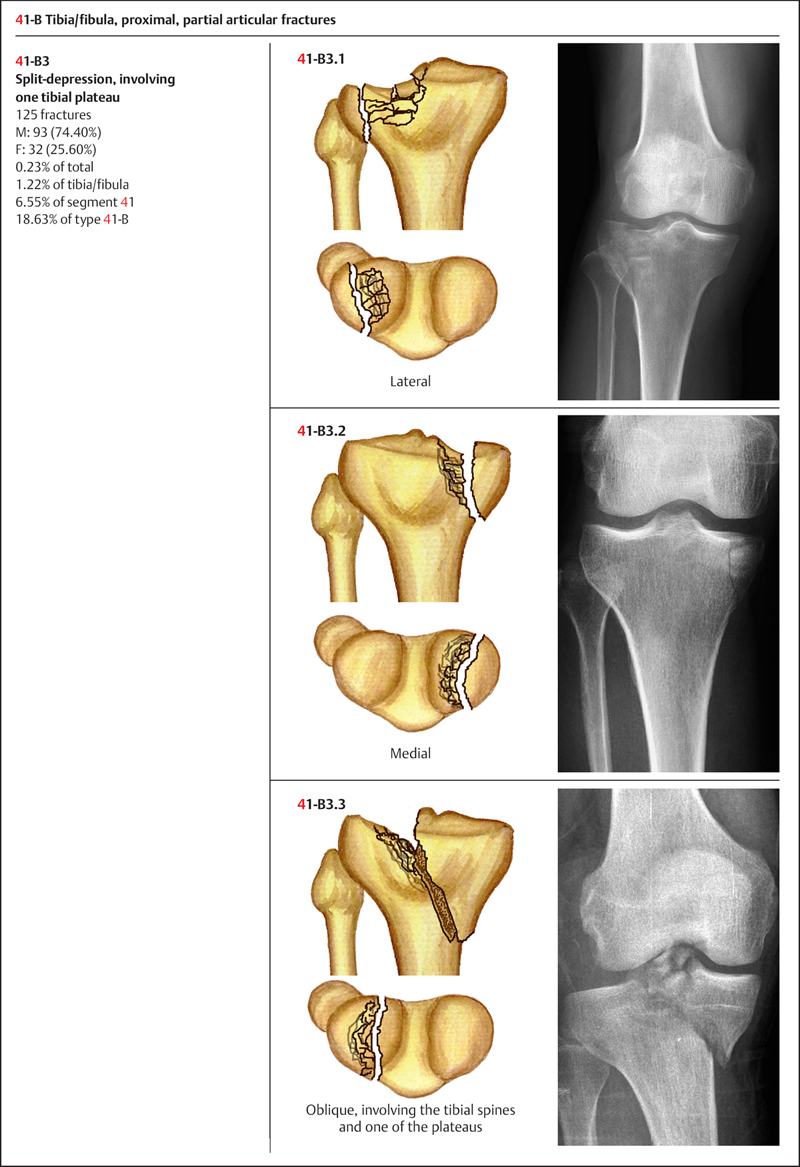 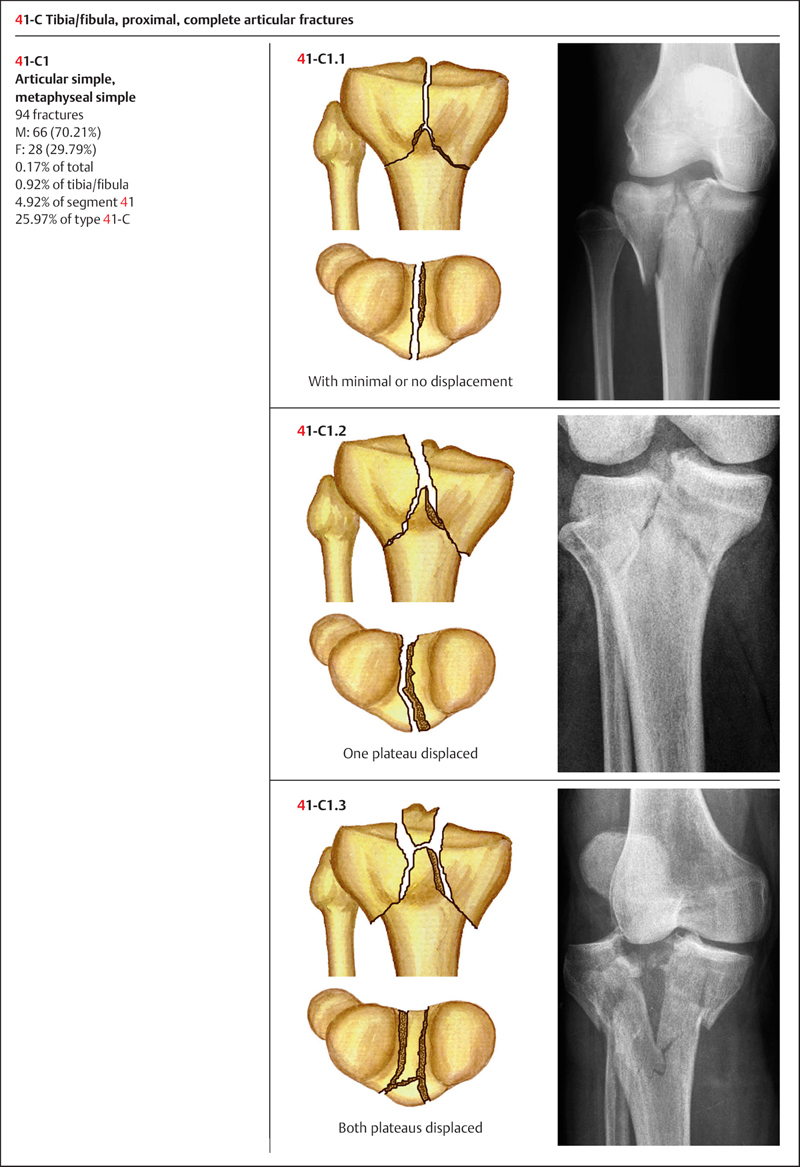 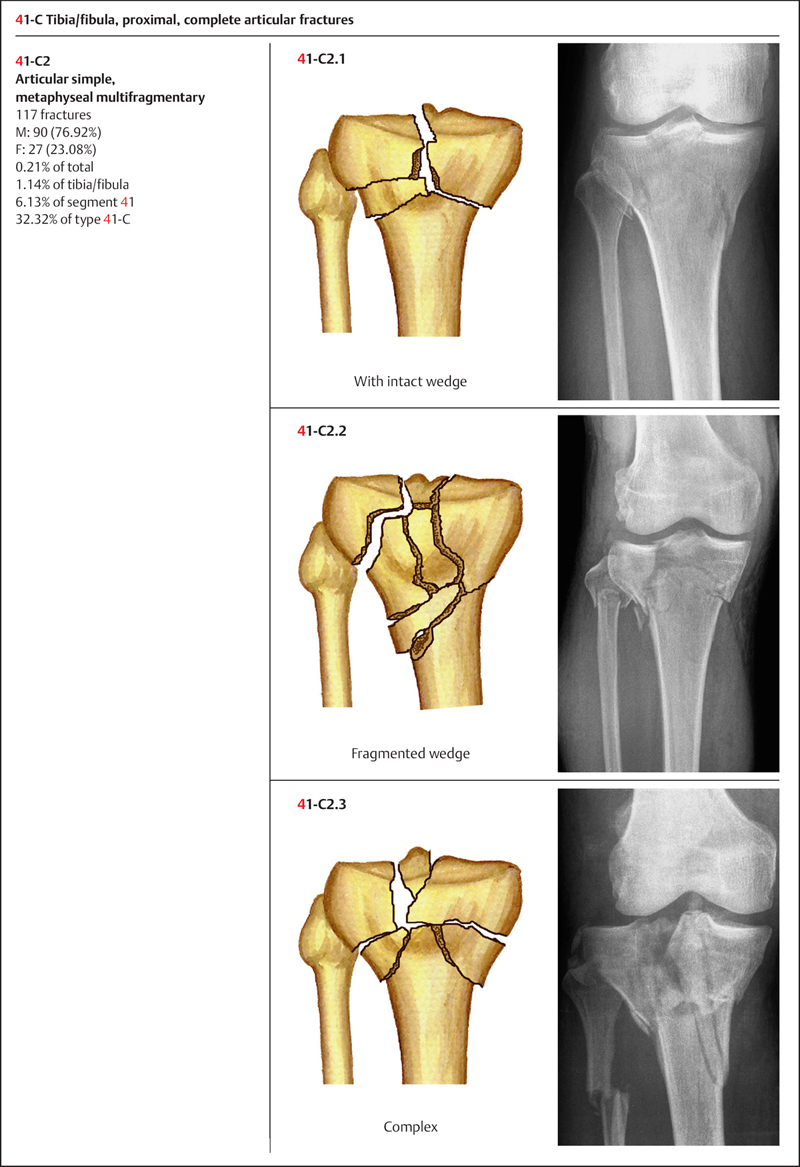 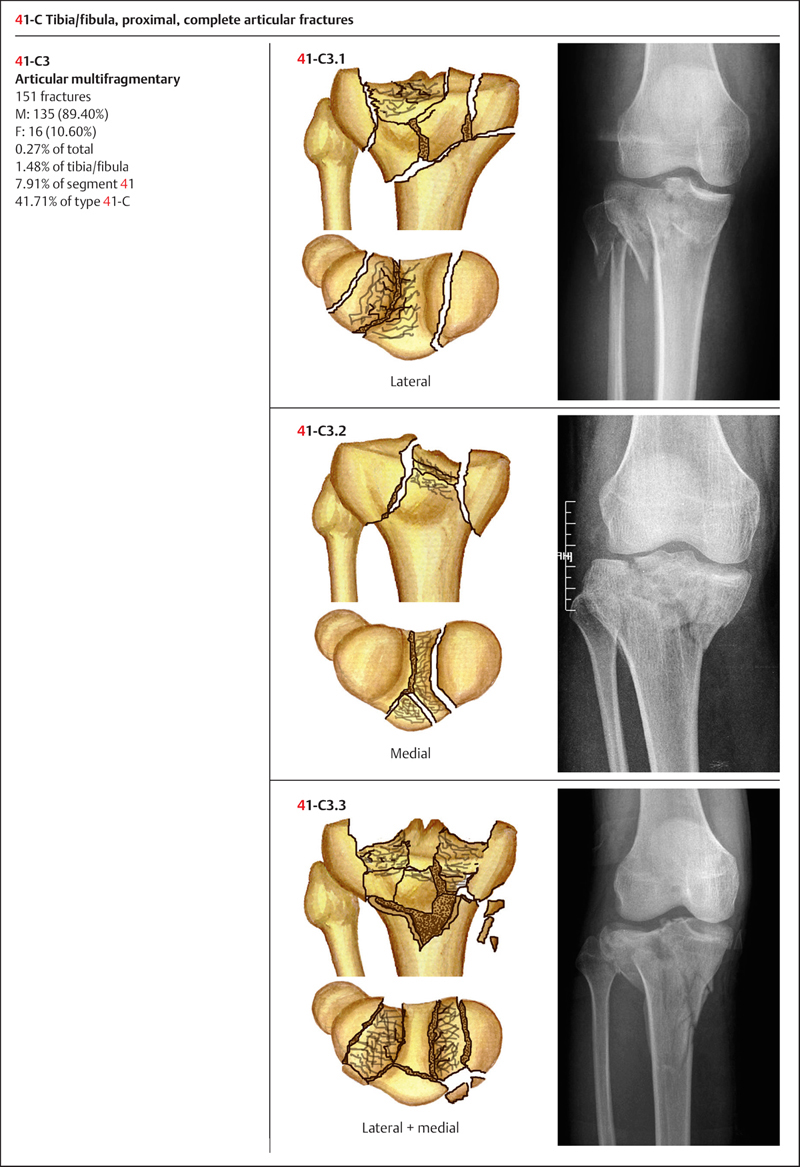 The most common mechanism of injury involves axial loading and/or valgus or varus force, such as from a fall or automobile accident. The severity of the fracture is associated with the magnitude and duration of the force. The axial compression load resulting from a fall from a significant height can cause depression, splitting, or even comminuted fractures of the tibial plateau. Depression or avulsion of the lateral plateau is the most common trauma that results from valgus/varus or hyperflexion/hyperextension forces, which also can cause avulsion of the tibial attachment of the anterior/posterior cruciate ligaments.

Patients with proximal tibia/fibula fractures may present with a knee effusion, pain, and stiffness, with a partial or limited range of motion. In severe fractures, a varus or valgus deformity of the affected limb may be present. If the injury resulted from high-energy trauma, a hypertonic blister, or compartment syndrome, rupture of the ligaments, and disruption of the neurovascular supply may accompany the fractures. The neurovascular status of the extremity and the surrounding soft tissue must be carefully evaluated.

Most tibial plateau fractures are easy to identify on the standard anteroposterior (AP) and lateral projections of the knee. Traction views may be helpful in comminuted fractures that result from high-energy trauma, to identify the shape and location of the fracture fragments; 40° internal and external oblique films can be used in assessing fractures involved with both tibial plateau surfaces. An AP projection with a 15° backward inclination may be helpful in assessing the depression of the tibial plateau. 3D computed tomography (CT) reconstruction and magnetic resonance imaging (MRI) can be used to further characterize fractures of the tibial plateau, and assess the depression of the tibia and the degree of fragment splitting to plan for surgical intervention. MRI is excellent for illustrating ligamentous and meniscal injuries. 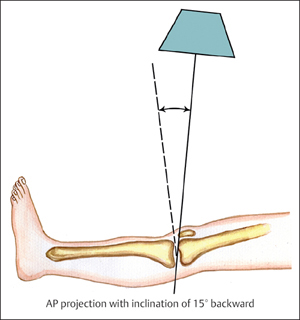 Intra-articular fractures of the proximal tibia/fibula are always associated with unstable fragments. If the fracture involves the articular surface, surgical intervention must be considered, using the principles of anatomic reduction, large-volume bone grafting, rigid fixation, and early postoperative nonweight-bearing active mobilization, which can minimize joint adhesion and joint stiffness. Depending on the fracture-healing stage, partial weight-bearing mobilization and exercise can be initiated under the supervision of an experienced therapist. Conservative methods such as casting or traction are inadequate in the treatment of such types of fractures, and should be applied cautiously even to treat fractures with minimal or no displacement.

Avulsion fractures of the fibular head are frequently associated with injuries of the lateral collateral ligament, and can be treated by casting, utilization of a joint-spanning external fixator, or internal fixation, depending on the amount of fracture displacement and severity of ligamentous damage. The available internal fixators include a mini hook plate and Kirschner wire (K-wire), combined with a tension band wire. Tibial tuberosity fractures can be treated with lag screws, tension band wires, tension band wires combined with K-wires, or a mini hook plate, depending on the size of the fragments and amount of displacement. A few factors influence the treatment choice of either conservative or surgical intervention for fractures of the tibial spine, including the patient’s age, size of the fragment, and amount of displacement. Surgical treatment can usually be done by arthroscopic reduction and fixation by screws or K-wires.

Tags: Clinical Epidemiology of Orthopedic Trauma
Jun 5, 2016 | Posted by admin in ORTHOPEDIC | Comments Off on Fractures of the Tibia/Fibula
Premium Wordpress Themes by UFO Themes
WordPress theme by UFO themes