The analysis of fatty acids in blood provides useful information about fatty acid deficiencies and imbalances and can also reveal a functional need for certain vitamins and minerals. Clinical interventions involve changes in food selection or supplementation with selected nut or seed extract oils and required micronutrients. Laboratory reports of fatty acid profiles typically list the fatty acids by structural type in the following order: ω-3–polyunsaturates, ω-6–polyunsaturates, monounsaturates, even-numbered saturates, odd-numbered saturates, and, finally, trans-monounsaturates. Several ratios may be calculated, and for plasma, the total fatty acid concentration may be calculated by summing the individual components and expressing the total in milligrams per deciliter, consistent with the units for serum triglycerides that are directly related to total fatty acid content.

A plasma fatty acid profile is an amplification of the standard serum triglyceride analysis. In both cases, the fatty acids are present in lipoprotein particles. Instead of measuring only the total of all fatty acids present, the profile test reports the individual concentrations of each fatty acid. An individual with high serum triglycerides has higher levels of many individual fatty acids in plasma. Of course, any condition associated with elevated serum triglycerides is likewise revealed as elevated plasma fatty acids. Patterns of high or low concentrations in plasma depend on recent dietary intake, composition of adipose fat, and rates of metabolic conversion. Plasma is the preferred specimen for routine evaluation of essential fatty acid (EFA) status because interpretation is less complicated by metabolic issues that bear upon fatty acid levels found in erythrocytes.

In contrast, erythrocyte membrane fatty acid profiling is commonly used to investigate metabolic conversion problems and genetic diseases. The erythrocyte membrane is 45% fatty acids in the form of various phosphatides and glycolipids. The procedure used for profiling measures total concentrations of individual fatty acids per milliliter of packed cells. Erythrocyte levels reflect those present in most tissues. Both erythrocyte and plasma have been used to monitor brain fatty acid balance in Zellweger syndrome.1 Both specimens have also revealed the need to supplement infant formulas with ω-3 fatty acids.2

The triglyceride-lowering drug gemfibrozil causes a profound suppression of erythrocyte unsaturated fatty acids, even in the presence of high concentrations of the same compounds in plasma. The effect is apparently due to stimulation of the peroxisomal β-oxidation system.3 Because of the metabolic effect of the drug, a patient consuming a diet high in olive oil (largely oleic acid) may show low levels of oleic acid in erythrocyte membranes while maintaining high oleic acid in plasma. Thus, plasma profiles show the dietary changes, and erythrocyte fatty acids show the metabolic impact of the drug.

Before 1996, virtually all clinical laboratories reporting fatty acid levels expressed results as a percentage of total concentration. Individual concentrations could not be reported due to the lack of pure standards necessary to build calibration curves. The reporting of “relative area” data has some utility but leaves important points obscured. The most abundant fatty acids are present at concentrations 50 times higher than those of the lesser components.4 Percent area calculations cause the most abundant components to have a disproportionate impact on the minor components. If α-linolenic acid (ALA) is the same in two cases, for example, whereas palmitic acid is low in the first and high in the second, the percent ALA can appear high in the first and normal in the second because palmitic acid makes up so much of the total, and the ratios are calculated by dividing by the total.

With the availability of pure standards, it is now possible to measure the concentrations of each fatty acid. Because the molecular weights span a range of more than seventy-fold for these homologous compounds, molar units allow more meaningful comparisons. This unit also simplifies interpretation of plasma fatty acids, where the total of all fatty acids is directly proportional (and closely equivalent) to the values for total triglycerides from a standard serum chemistry assay. For erythrocytes, concentration is based on packed cell volume or on total lipid extract volume. 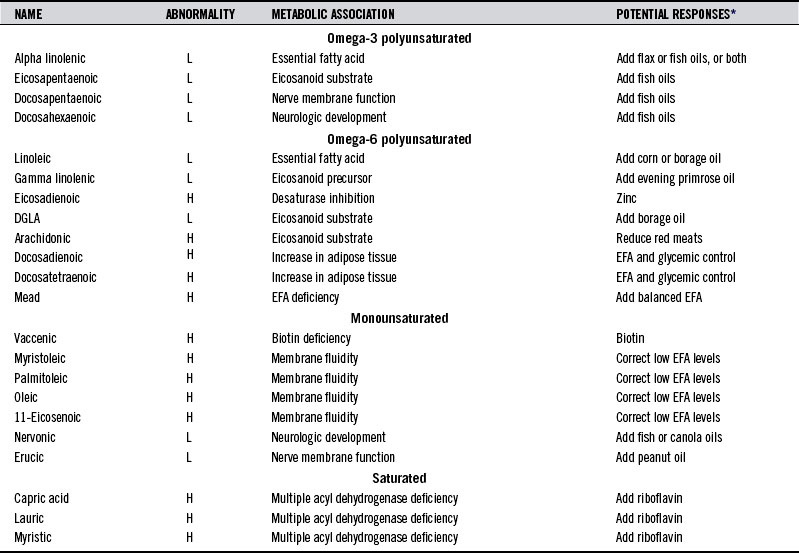 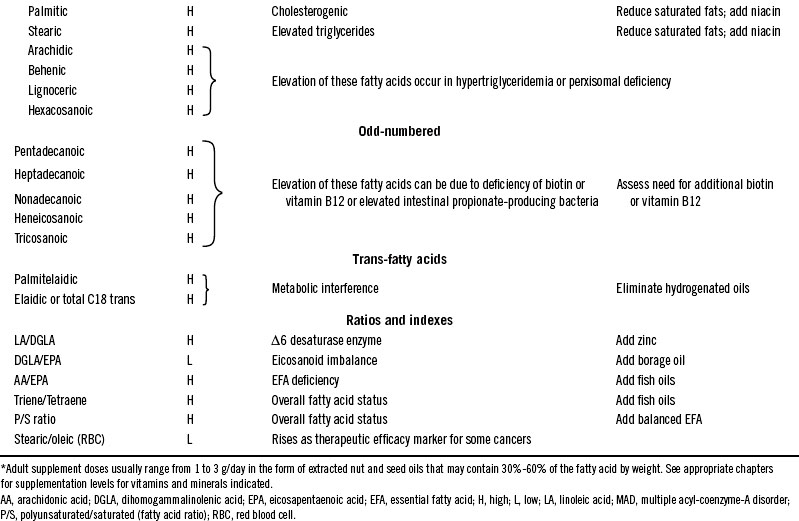 Many edible plants produce this 18-carbon polyunsaturated fatty acid, but because of the small amounts of fresh vegetables consumed by many people, it is one of the least abundant of the EFAs in most diets. It is found in relatively high amounts in flax, hemp, canola seed, soybean, walnut oils, and in dark green leaves. It must be supplied by such foods because human tissues lack the necessary enzymes for its formation. Dietary insufficiencies of ALA and its ω-6 counterpart, γ-linolenic acid (GLA), play central roles in several diseases (see Tables 90-4 and 90-5 in Chapter 90). The wide range of symptoms and disease associations is due to their functions in processes of membrane integrity and cell activity regulation by eicosanoids (20-carbon fatty acids). Correction of low body pools of ALA requires dietary changes or the use of dietary supplements containing ALA. Table 14-2 lists food sources of ALA. The dietary origin of ALA deficiency disorders can be seen by inspecting the ALA content of corn, safflower, and peanut oils that are so predominant in modern diets. 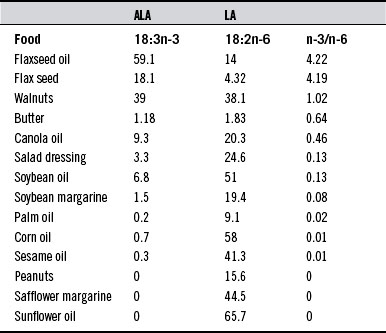 Insufficiencies of eicosapentaenoic acid (EPA) are likely the most prevalent fatty acid abnormality affecting the health of individuals in Western societies. Low levels in plasma, erythrocytes or blood spot specimens are indicative of insufficiency. Arthritis, heart disease, and accelerated aging result from direct or indirect effects of inflammatory responses that may be modulated by raising EPA levels. Supplementation with EPA-rich fish oils (Table 14-3) aids in the prevention of cardiac arrhythmias.5 Significant reduction in total cholesterol and triglyceride has been achieved with a combination of garlic concentrate (900 mg/day) and fish oil supplementation.6 EPA is the precursor of the 3-series prostanoids and leukotrienes that moderate the proinflammatory effects of the 2-series derived from arachidonic acid (AA). Although EPA can be produced from the essential fatty acid ALA, dietary intake of this fatty acid is generally poor. The conversion also requires the action of the δ-6 desaturase enzyme, which may be low due to inadequate zinc, magnesium, or vitamins B3, B6, and C.7 Such enzyme impairment would be indicated if EPA is low and ALA is normal or high. High levels of saturated, monounsaturated, and trans-fatty acids and cholesterol also slow the conversion of ALA to EPA (as well as GLA to dihomogammalinolenic acid [DGLA]). Dietary supplementation of EPA is an important part of nutritional support in patients with compromised immune responses, including postoperative and trauma.8 Fish oil supplementation lowers triglycerides without effect on glycemic control in type 2 diabetes.9 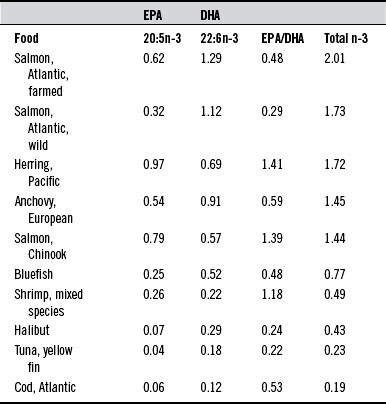 Growth and development of the central nervous system depend on the presence of an adequate amount of the long-chain, highly unsaturated fatty acids docosapentaenoic acid (DPA) and docosahexaenoic acid (DHA).10,11 Attention deficit hyperactivity disorder and failures in development of the visual system in EFA deficiencies are two examples of this dependency.12 DHA is an important member of the very long-chain fatty acids (C22-C26), which characteristically occur in glycosphingolipids, particularly those in the brain. The levels in breast milk are correlated with the mother’s intake of fish oils, which are rich sources of DHA and DPA.13 Plasma DHA levels should be checked as early as possible in pregnancy. The finding of low DHA in plasma or erythrocytes also justifies the use of supplemental DHA for depression.14

Linoleic acid (LA) is the most abundant polyunsaturated fatty acid (PUFA) in most human tissues. Low levels in plasma or erythrocytes indicate dietary insufficiency, which leads to various symptoms (see Table 90-4 in Chapter 90). Some of these symptoms result from a lack of LA in membranes, where it has a role in structural integrity. Most, however, are from failure to produce the 1-series and 3-series prostanoids. Neonatal LA status of this fatty acid can be insufficient.15 Fetal LA and DHA are correlated with maternal red blood levels.16 However, because dietary sources (especially corn oil) are abundant, LA may be above normal range in some adults. Excessive LA can contribute to an overproduction of the proinflammatory 2-series local hormones derived from AA.

Although the n-6 fatty acids, especially LA, are widely imputed as health risk factors because of their relative overabundance in modern diets, it is important to recognize that the clinical imperative is to discriminate excess from deficiency status. The only sure way to know whether a patient is in n-6 fatty acid deficit or excess is to perform a laboratory evaluation of fatty acid status.

GLA is the precursor of DGLA, the parent of the 1-series prostanoids. GLA is found in hemp, borage, blackcurrant, and evening primrose oils. It can be produced in human tissues by the action of desaturase enzymes on LA. Use of 1.4 g/day in the form of borage seed oil resulted in a clinically important reduction in the signs and symptoms of rheumatoid arthritis.17 In cases of cancer, it is especially important that low levels of GLA should not be supplemented without added ω-3 fatty acids because ω-6 fatty acids can enhance tumor formation and growth, whereas ω-3 fatty acids tend to inhibit tumors.18 GLA corrects most of the biological effects of zinc deficiency.19