Dry needling of the shoulder muscles

Shoulder pain, shoulder complaints and shoulder disorders are frequently used terms and appear synonymous. It is clear from the definitions that there is a certain overlap between these terms. In this chapter, we will use the term shoulder pain.

Shoulder pain is a very common musculoskeletal disorder. In primary care, the yearly incidence is estimated to be 14.2 per 1000 people. The 1-year prevalence in the general population is estimated to be 20–50%. The estimates are strongly influenced by the definition of shoulder disorders, including or excluding criteria, including limited motion, age, gender, and anatomical areas. Thus, shoulder pain is widespread and imposes a considerable burden on the affected person and on society. Women are slightly more affected than men and the frequency of shoulder pain peaks between 46 and 64 years of age (Van der Windt et al. 1995). Shoulder pain tends to be persistent or recurrent despite medical treatment (Ginn & Cohen 2004). The pathophysiological mechanisms are poorly understood in spite of a growing body of knowledge of shoulder kinematics, shoulder injury mechanisms, and the technical improvement of medical imaging, including sonography, magnetic resonance imaging or more conventional techniques such as X-rays.

Most shoulder pains are caused by a small number of relatively common conditions. Although subacromial impingement is often suggested to be the most common potential source of shoulder pain (Neer 1972, Hawkins & Hobeika 1983), solid evidence is lacking (Bron 2008). This syndrome includes tendonitis or tendinopathy of the rotator cuff and the long head of the biceps brachii muscle, or subacromial or subdeltoid bursitis. In fact, calcifications, acromion spurs, subacromial fluid, or signs of tendon degeneration are equally prevalent in healthy subjects and in individuals with shoulder pain (Milgrom et al. 1995). Furthermore, physical examination tests of subacromial impingement are not reliable (Hegedus et al. 2007), and the results of imaging diagnostics do not correlate well with pain (Bradley et al. 2005). In addition, interventions targeting subacromial problems are, at best, only moderately effective at treating patients with shoulder complaints (Coghlan et al. 2008, Buchbinder et al. 2009, Dorrestijn et al. 2009). Other less common causes of shoulder pain are tumors, infections, and nerve related injuries.

Myofascial trigger points (TrPs) in patients with shoulder pain are most prevalent in the infraspinatus, upper trapezius and deltoid muscles and most of the time, multiple TrPs in more than one muscle are involved (Hsieh et al. 2007, Ge et al. 2008, Bron et al. 2011b). Ingber (2000) successfully treated the subscapularis muscle, which was thought to be the main cause of shoulder pain in three overhead athletes. Hidalgo-Lozano et al. (2010) found that the muscles most affected by active TrPs were the supraspinatus, infraspinatus and subscapularis in patients with shoulder pain with a medical diagnosis of shoulder impingement. A recent study of elite swimmers with shoulder pain showed similar findings (Hidalgo-Lozano et al. 2011a).

In an older study, Sola et al. (1955) concluded that the supraspinatus muscle was one of the least frequently involved shoulder girdle muscles both in patients and in young healthy adults. The supraspinatus muscle is rarely involved by itself, but usually appears in association with the infraspinatus or upper trapezius muscles (Bron et al. 2011b) or the subscapularis muscle (Hidalgo-Lozano et al. 2010), which very commonly harbor TrPs in patients with shoulder pain and dysfunction. In addition, other muscles, such as the levator scapulae, biceps brachii, deltoid, pectoralis minor, pectoralis major, scalene, latissimus dorsi, teres major and minor muscles may also be involved in shoulder pain. In fact, two studies demonstrated that TrPs in the latissimus dorsi and pectoralis major muscles reproduced axillary arm pain in women with breast cancer who had undergone mastectomies (Fernández-Lao et al. 2010, Torres-Lacomba et al. 2010)

On the other hand there is evidence that muscle pain can create a different motor activation pattern. Falla et al. (2007) demonstrated that an injection with hypertonic saline reduced the electromyographic (EMG) activity in the painful (injected) muscle and led to hyperactivity of the muscles in the ipsi- and contralateral shoulder. These findings are consistent with the pain-adaptation model of Lund et al. (1991), which maintains that muscle pain causes a decrease of EMG activity in the agonist muscle, while it causes an increase of EMG activity in the antagonists, finally leading to motor control changes. As active TrPs cause muscle pain, they may also cause muscle inhibition and disturbances of motor activation patterns. In fact, Lucas et al. (2010) demonstrated that even latent TrPs disturb motor activation patterns.

Adhesive capsulitis, also referred to as primary frozen shoulder, is the most common cause of severely restricted shoulder joint mobility. Based on clinical experience of the authors of this chapter, inactivation of TrP in shoulder muscles, particularly the subscapularis muscle, frequently reduces patients’ symptoms, including pain and restricted mobility, which may lead to an early and proper recovery within weeks. However, there is no scientific evidence from the literature to support this clinical experience. In a multiple case study of five patients with primary frozen shoulders, all patients improved after a subscapular nerve block and subscapularis muscle injections (Jankovic & van Zundert 2006).

Another enigmatic shoulder disorder is referred to as minor, subtle, occult or functional instability, which is often associated with shoulder pain and diagnosed as secondary shoulder impingement. Patients with this disorder complain of a feeling of instability in the absence of true instability, confirmed by physical examination tests such as the apprehension test. Although not mentioned in the literature, these patients often respond well to dry needling of the adductor muscles of the shoulder, including the teres major, latissimus dorsi, and subscapularis muscles.

Dry needling of the shoulder muscles

• Anatomy: The muscle originates from the supraspinous fossa of the scapula and inserts at the superior facet of the greater tubercle of the humerus.*

• Function: It assists in abduction and stabilizes the humeral head together with the other rotator cuff muscles during all movements of the shoulder. The muscle prevents caudal dislocation during carrying of heavy loads, such as bags and suitcases.

• Innervation: Suprascapular nerve, from the C5 and C6 nerve roots.

• Referred pain: It is projected to the mid-deltoid region, often extending down the lateral aspect of the arm and forearm, sometimes focussing strongly over the lateral epicondyle of the elbow.

• Needling technique: The patient lies prone (Figure 7.1) or on the uninvolved side with the arm close to the body and relaxed (in side-lying supported by a pillow; Figure 7.2). The supraspinatus muscle is only accessible through the upper trapezius muscle and is identified by flat palpation with sufficient pressure. After localization of the TrP, the needle is inserted and directed longitudinal to the frontal plane or slightly posterior towards the base of the supraspinous fossa.

• Precautions: The apex of the lung is in front of the scapula and clinicians should avoid needling in a ventral direction. 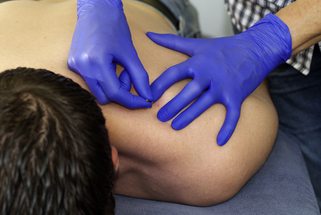 Figure 7.1 Dry needling of the supraspinatus muscle in prone. 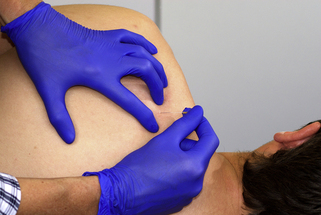 Figure 7.2 Dry needling of the supraspinatus muscle in side-lying.

• Anatomy: The muscle originates from the infraspinous fossa of the scapula and inserts at the dorsosuperior facet of the greater tubercle of the humerus.

• Function: It assists in external rotation and stabilizes the humeral head together with the other rotator cuff muscles and prevents upwards migration of the humeral head during all movements.

• Innervation: Suprascapular nerve, from the C5 and C6 nerve roots.

• Referred pain: It is projected to the front of the shoulder (intra-articular pain) and the mid-deltoid region, extending downwards the arm to the ventrolateral aspect of the arm and forearm and the radial aspect of the hand. The referred pain from this muscle can mimick the symptoms of carpal tunnel syndrome (Qerama et al. 2009)

• Needling technique: The patient lies prone (Figure 7.3) or on the uninvolved side with the arm slightly abducted (in side-lying supported by a pillow; Figure 7.4). The needle is directed towards the scapula.

• Precautions: In osteoporotic patients fenestration of the scapula has been reported, which would imply that clinicians should avoid needling through the scapula. In clinical practice, however, fenestration has not been an issue. 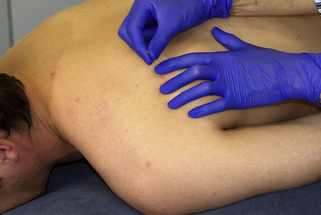 Figure 7.3 Dry needling of the infraspinatus muscle in prone. 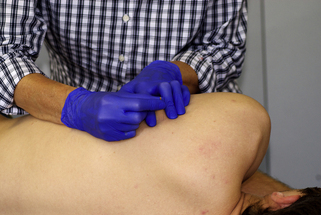 Figure 7.4 Dry needling of the infraspinatus muscle in side-lying.

• Anatomy: The muscle originates from the upper one-third of the lateral border of the dorsal surface of the scapula and inserts on the dorsal facet of the greater tubercle below the insertion of the infraspinatus muscle.

• Function: It has the same function as the infraspinatus muscle, but can also adduct the upper arm.

• Innervation: Axillary nerve, from the C5 and C6 nerve roots

• Referred pain: It is projected to the dorsal aspect of the shoulder and TrPs may cause numbness and/or tingling in the ulnar aspect of the forearm and hand.

• Needling technique: The patient lies prone with the upper arm 90° abducted. The TrP is usually located by flat palpation just caudal to the glenohumeral joint. The needle is directed to the lateral border of the scapula (Figure 7.5).

• Precautions: When needling in front of the scapula, clinician can easily pass through the intercostal space and enter the pleura and lung. 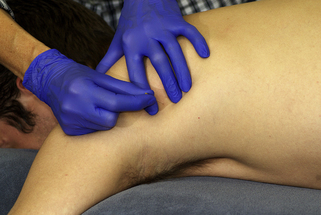 Figure 7.5 Dry needling of the teres minor muscle in prone.

• Anatomy: The muscle originates from the subscapular fossa and inserts to the lesser tubercle and reinforces the transverse ligament that overlies the bicipital sulcus.

• Function: It is an internal rotator assisted by the pectoral major muscle. It stabilizes the humeral head together with the other rotator cuff muscles and prevents upward migration of the humeral head during all movements.

Axillary approach: The patient lies supine with the arm 90° abducted and 90° externally rotated. Bringing the scapula more laterally will optimize access to the muscle. The needle is directed parallel to the ribcage perpendicular to the scapula (Figure 7.6).
Only gold members can continue reading. Log In or Register to continue