It is well appreciated that patients with chronic insufficiency of the lateral and posterolateral structures of the knee may develop a gait abnormality characterized by excessive knee hyperextension during the stance phase (initial contact or heel-strike, loading response, midstance, and toe-off) of the gait cycle (Fig. 34-1). The primary lateral and posterolateral structures of the knee joint are the fibular collateral ligament (FCL) and popliteus muscle-tendon-ligament unit (PMTL), including the popliteofibular ligament (PFL) and the posterolateral capsule (PLC). These structures function together to resist lateral tibiofemoral compartment opening, posterior subluxation of the lateral tibial plateau with tibial rotation, knee hyperextension, and varus recurvatum (see Chapter 20, Function of the Posterior Cruciate Ligament and Posterolateral Ligament Structures).8,9,12,13,19,26 Posterolateral injuries are frequently accompanied by a rupture to the anterior cruciate ligament (ACL) and, in some cases, a rupture to the posterior cruciate ligament (PCL).5,7,11 In addition, many knees with insufficiency to the posterolateral structures also have varus osseous malalignment. The comprehensive physical examination and radiographic evaluation required to determine all of the abnormalities that exist in these complex knee joint injuries are detailed in Chapter 21, Posterior Cruciate Ligament: Diagnosis, Operative Techniques, and Clinical Outcomes, and 31, Primary, Double, and Triple Varus Knee Syndromes: Diagnosis, Osteotomy Techniques, and Clinical Outcomes. 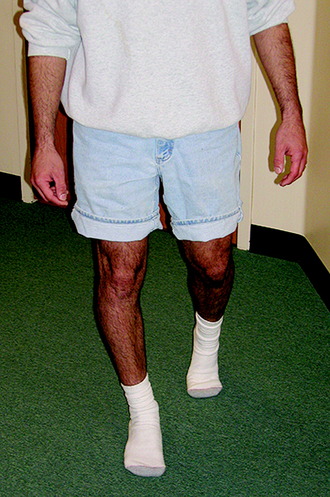 FIGURE 34-1 A lower limb varus deformity and hyperextension gait abnormality are evident in this 32-year-old man with chronic deficiency of the posterolateral structures and varus malalignment.

The gait abnormality described in this chapter is easily identifiable in the clinic if the examiner devotes a small amount of time to observation during the initial patient presentation. An abnormal knee hyperextension gait pattern involves increased extension (>0°) in the sagittal plane and, frequently, associated varus malalignment in the coronal plane (varus recurvatum). The varus recurvatum position of the knee will be markedly worse if there is associated osseous tibiofemoral varus malalignment. The triple varus knee, described in detail in Chapter 31, Primary, Double, and Triple Varus Knee Syndromes: Diagnosis, Osteotomy Techniques, and Clinical Outcomes, refers to varus alignment caused by three factors: tibiofemoral varus osseous malalignment, increased lateral tibiofemoral compartment separation due to marked insufficiency of the FCL and PMTL, and varus recurvatum in extension. An abnormal increase in hyperextension usually indicates damage to not only the posterolateral structures but the ACL as well.

• Patients with chronic insufficiency of the lateral and posterolateral structures may develop a gait abnormality characterized by excessive knee hyperextension during the stance phase of the gait cycle.
• Gait abnormality is easily identifiable in the clinic: increased extension (>0°) in the sagittal plane, associated varus recurvatum.
• Patients with knee hyperextension gait problems present with varying amounts of altered gait mechanics, symptoms, and functional limitations.
• Degree of the gait abnormality during the stance phase depends on the magnitude of associated ligamentous deficiencies, quadriceps muscle atrophy, and symptomatic patellofemoral arthrosis.
• Complaints of either partial or full giving-way during routine daily activities are frequent.
• Pain is in medial compartment, posterolateral tissues.
• Increased risk of failure of cruciate and posterolateral reconstructions exists if the gait abnormality is not corrected before surgery.

In the authors’ experience, patients with knee hyperextension gait problems present with varying amounts of altered gait mechanics, symptoms, and functional limitations. Some may demonstrate a markedly abnormal gait that is severely disabling and limits ambulation, requiring crutch or cane support. Others may have a less noticeable alteration, with the abnormal knee hyperextension occurring only after excessive walking (or other weight-bearing activities) and muscle fatigue. The degree of the gait abnormality during the stance phase depends on the magnitude of associated ligamentous deficiencies, quadriceps muscle atrophy, and symptomatic patellofemoral arthrosis.

Subjective complaints of knee instability of either partial or full giving-way during routine daily activities often accompany the knee hyperextension gait abnormality. Pain is frequently located in the medial tibiofemoral compartment, which is caused by increased compressive forces owing to the varus malalignment. Pain in the posterolateral tissues also occurs from increased soft tissue tensile forces. In addition to the pain and instability caused by this gait pattern, there is an increased risk of failure of posterolateral reconstructions if the gait abnormality is not corrected before surgery. This is due to the excessively high tensile forces from high knee extension and adduction moments that are expected to be resumed during weight-bearing activities after surgery.16 In addition, patients with associated ACL or PCL deficiency may have an increased risk of failure of cruciate ligament reconstructions if the hyperextension pattern is not corrected before surgery.14,15 Therefore, gait retraining and avoidance of the gait hyperextension pattern are paramount for both resolution of patient symptoms and reduction of the risk of failure of soft tissue ligament reconstructive procedures.

Many investigators have described a quadriceps-avoidance abnormal gait pattern in patients with ACL ruptures.1,2,6,18,20,27 An investigation at the authors’ center18 documented diminished quadriceps activity and enhanced hamstring muscle activity in one half of 32 ACL-deficient varus-angulated knees. Whereas the increased hamstring muscle force could be assumed to be beneficial because it provides a protective mechanism in decreasing anterior tibial translation, the increased muscle force creates high axial compressive forces and, therefore, increases medial and lateral joint compartment (calculated) loads. These loads could be deleterious to the joint over the long term, especially in knees with associated varus osseous malalignment. The abnormal gait characteristics of the ACL-deficient knee are discussed in detail in Chapter 6, Human Movements and ACL Function: ACL-Deficiency and Gait Mechanics.

A hyperextension gait abnormality pattern is also found in patients who have suffered a stroke or traumatic brain injury, cerebral palsy, and poliomyelitis.10 In these instances, the disorder may occur owing to many factors including quadriceps weakness, ankle plantar flexion spasticity, heel cord contracture, and gastrocnemius-soleus weakness. The concern is that the abnormal knee hyperextension may cause stretching of the posterior ligamentous and capsular structures from the increased external extensor torque that is placed across the knee during stance. It is not the purpose of this chapter to discuss the treatment of this problem in patients with neurologic pathology. Rather, this chapter focuses on the treatment of this gait disorder in patients with chronic insufficiency of the posterolateral structures, with or without cruciate ligament ruptures or varus malalignment.

The normal pattern of knee motion that occurs during the gait cycle is shown in Figure 34-2. A detailed description of normal human gait mechanics is beyond the scope of this chapter and has been presented by many authors.3,4,21,24,25 The loss of the normal knee flexion and extension patterns throughout the stance phase noted in patients with hyperextension gait abnormalities has important functional implications. During the loading response, normal amounts of knee flexion are required for the knee joint to absorb shock. A limb that is instead hyperextended transfers body weight directly from the femur to the tibia, resulting in abnormally high compressive forces. The usual muscle energy absorption and cushioning effect a flexed knee provides is lost.22,23 The thrusting hyperextension motion at the knee is associated with an abnormally high adduction moment, which tends to increase medial tibiofemoral compartment compressive forces and lateral distraction forces. The increased compressive forces manifest as pain in the medial tibiofemoral compartment and posterolateral soft tissues. 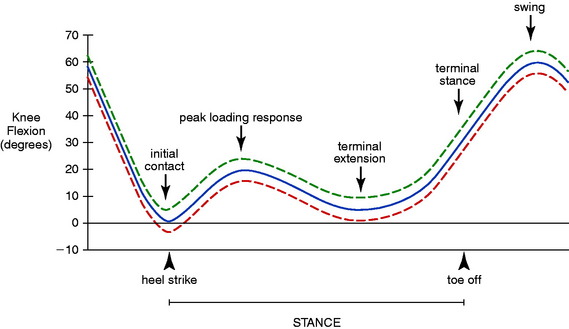 FIGURE 34-2 Knee motion (in degrees) during a normal gait cycle is shown. Phases of stance gait are indicated.

The authors have reported two distinct knee hyperextension gait patterns. In pattern I, the abnormal hyperextension occurs during two periods of the stance phase, heel-strike and terminal extension (Fig. 34-3), with knee flexion noted during the loading response. Exceedingly high knee extension moments are present, along with an abnormal reversal of hip extension and ankle dorsiflexion. Pattern II is characterized by a prolonged knee hyperextension pattern from heel-strike throughout midstance (Fig. 34-4). In these patients, the knee flexion moment is markedly below normal, with its effects incurred primarily at the knee with only a slight delay in ankle dorsiflexion. 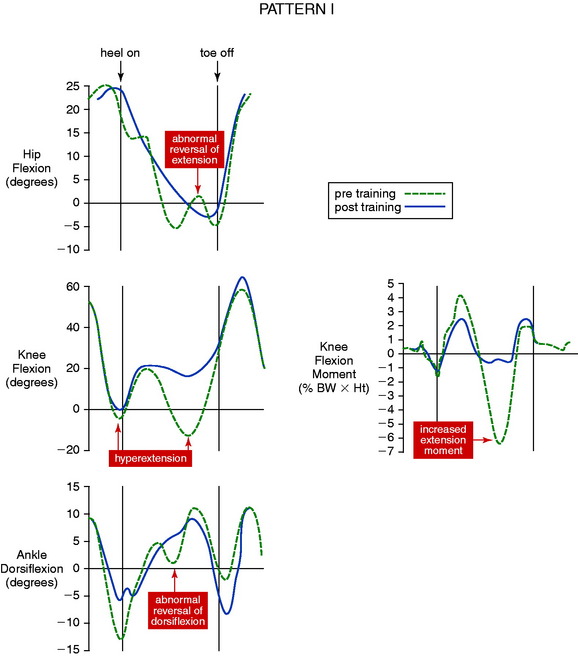 FIGURE 34-3 Generalized motion at the hip, knee, and ankle (in degrees), and flexion and extension moment (percentage of body weight x height) for patients showing pattern I, knee hyperextension at heel-strike and midstance only.

FIGURE 34-4 Generalized motion at the hip, knee, and ankle (in degrees), and flexion and extension moment (percentage of body weight x height) for patients showing pattern II, hyperextension of the knee throughout the stance phase.

The authors’ clinical observations17 on the various types of abnormal knee motions and thrusts in the sagittal, coronal, and transverse rotational planes that occur during the stance phase of gait are summarized in Table 34-1. Any abnormality in tibiofemoral alignment (varus-valgus osseous malalignment or anterior-posterior tibial slope) may affect knee-thrusting motions in the sagittal or coronal plane. The most common of these is a varus-thrusting gait abnormality, caused by a varus tibiofemoral osseous malalignment. The thrusting motion occurs with the knee near full extension immediately after heel-strike, during the loading response. There may be an associated external or internal rotational subluxation with the varus thrust, depending on the presence of associated deficiency to the posterolateral structures. A less common abnormality, a valgus-thrusting gait, is usually associated with valgus lower limb malalignment. This disorder is typically accompanied by external rotation of the tibia. Knees with these osseous malalignments and associated knee ligament deficiencies require surgical correction of the malalignment by osteotomy prior to ligament reconstructive procedures. 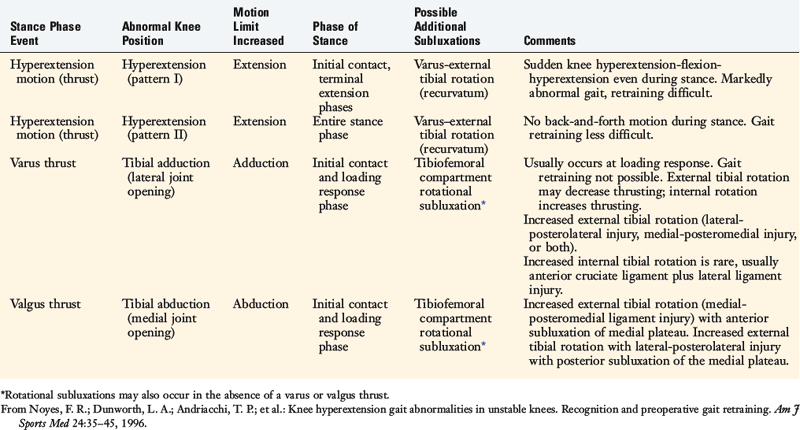 A gait-retraining program has been successfully used at the authors’ center17 for knee hyperextension abnormalities since the mid-1980s. The program requires two to four initial clinical sessions (held preferably every other week) with an experienced physical therapist to instruct the patient on the abnormal gait mechanics that occur and the adaptations required to restore a normal gait pattern (Table 34-2). The patient is instructed to practice at home for at least 2 to 4 hours daily. In addition, the patient undergoes muscle strengthening and neuromuscular coordination training as part of the comprehensive rehabilitation process. In order to have a successful outcome, the patient must be compliant with the time commitment and constant motivation required of this program. A family member is also taught the same instructions so that she or he can observe and assist with the patient’s retraining at home. It is also helpful to video the patient’s abnormal and corrected gait to aid the educational process.