Complications of knee arthroscopy can be divided into three broad categories—clinical or medical patient complications, technical or iatrogenic complications, and material- or device-associated complications. Clinical or medical complications can occur in patients undergoing knee arthroscopy, which include deep venous thrombosis (DVT), pulmonary embolus (PE), wrong-site surgery, and infections. Technical or iatrogenic complications include nerve and vascular injury, chondral injury and idiopathic necrosis of the femoral condyle, overresection or incomplete removal of a torn meniscus, fluid extravasation as a result of pump failure, chronic postoperative synovitis, cold therapy skin injury, and anterior and posterior cruciate ligament reconstruction complications. Material- or device-associated complications include problems with the placement of screws or fixation devices and the use of bioabsorbable materials used to repair the meniscus, including failure to heal, breakage or migration of the implanted material, and persistence of pain subsequent to the placement of the device.

Deep venous thrombosis (DVT) has been reported to be as high as 17.9% after arthroscopy of the knee. Some authors have stated that without proper screening, fatal pulmonary embolus (PE) may be as high as 1.3% of cases.1 At an advanced arthroscopic knee course in August 2006, the audience was surveyed; 4 out of 40 knee arthroscopic surgeons had experienced a fatal PE in their practice, with an incidence in this small group of 10%.2 Although arthroscopy of the knee is considered to be a “benign” procedure, one study noted at least one risk factor for DVT in 37% of patients undergoing routine knee arthroscopy.3 In 2004, Geerts and colleagues4 reported on multiple risk factors contributing to DVT and PE, including obesity, history of prior DVT, cancer, use of oral contraceptives, and increased age. Anderson and Spencer5 categorized the top 10 factors causing DVT and ranked them in terms of risk. Age older than 40 years was the most significant causative factor followed by obesity, prior history of DVT, cancer, bed rest longer than 5 days, major surgery, congestive heart failure, varicose veins, hip or lower extremity fracture, and estrogen treatment. They further noted that one or more risk factors increased the incidence of development of subclinical DVT or PE to 96.3%.

Eynon and associates6 were one of the first to suggest that all patients having routine knee arthroscopies should receive anticoagulant prophylaxis. One study has reported the incidence of DVT and/or PE when comparing a control group and a second group treated with low-molecular-weight heparin (LMWH) without any known risk factors to be as high as five times greater when diagnosed by ultrasound on days 7 and 10 postoperatively.7 Another study noted a 10 times greater incidence of DVT and/or PE after preoperative and postoperative treatment with LMWH when diagnosed with ultrasound at 12 and 31 days postoperatively.8 It is estimated that between 20% to 30% of calf thrombi propagate proximally to the popliteal and femoral veins, which have an increased chance of resulting in PE. Some have argued that pharmacologic DVT prophylaxis should be routinely prescribed to patients undergoing knee arthroscopy for that reason.1,6 However, there are no agreed on recommendations in the literature about prophylaxis for arthroscopy of the knee, with or without prior history of DVT or PE.1 We recommend that all those undergoing knee arthroscopy should be given acetylsalicylic acid (ASA) preoperatively and postoperatively for 4 weeks and that those with acquired, genetic, or hemostatic risk factors be placed on preoperative and postoperative warfarin (Coumadin) or LMWH for 3 to 4 weeks to reduce the possibility of PE or DVT.

Wrong-site surgery (WSS) accounts for approximately 2% of all orthopedic claims. However, 84% result in a mean court award to the plaintiff of $48,087. Most of these were knee arthroscopies. The Physician Insurer’s of North America recorded 331 WSS claims from 1985 to 1995, and 225 were against orthopedic surgeons.9 The incidence of WSS reported to the American Academy of Orthopaedic Surgeons (AAOS) between January 1995 and December 2003 were 17% wrong knee, 12% wrong person, and 10% wrong procedure. Interestingly, hospital-based ambulatory surgery centers had the highest incidence of errors, 53%. The three most important factors to prevent wrong-site surgery errors were preoperative patient identification, surgical site indelible marking, and the physician’s signature on the surgical site. When all three of these were done, there was a 0% failure rate. However, when only two of these three were done, there was a 12% incidence of failure.10 Additional analysis of the complications that occurred estimated that an orthopedic surgeon has a 25% chance of performing wrong-site surgery during his or her career and that WSS tends to increase with increasing age and increased caseloads.9,11

Several requirements to reduce the risk of WSS significantly must be implemented in the hospital or ambulatory surgery center setting. Initially, the admitting nurse must identify the patient’s correct name preoperatively by verbally asking the patient and correlating this with the wristband. The surgeon should also check the patient’s name, either by directly asking the patient for his or her name and looking at the wristband. Second, the surgeon and patient should sign the site with an indelible marker within the operative site not covered by a drape. The patient should put “yes” on the operative knee and the surgeon should sign her or his initials directly over the operative site. Third, and finally, the circulating nurse must read the permit out loud and everyone in the operating room should acknowledge that this has been read, with the patient, procedure, and surgical site stated clearly. If these recommendations are followed 100% of the time, the incidence of wrong site surgery should be 0%.

The incidence of infection after knee arthroscopy has been reported to be from 0.04% to 0.42%.14–16 Risk factors that have been reported to contribute to knee arthroscopy infections include intra-articular steroids given intraoperatively, increased surgical time, prior surgical procedures, chondroplasty, and soft tissue débridement.17 The diagnosis of infection can be difficult to make immediately postoperatively. Persistent pain and swelling after arthroscopy should have joint aspiration and culture despite the absence of fever, erythema, leukocytosis, or benign-appearing joint fluid. This diagnosis needs to be made immediately, if possible, and then treated with knee arthroscopy, lavage, and 2 to 6 weeks of intravenous antibiotics. Antibiotic prophylaxis in knee arthroscopy has been discussed and debated by several authors. Based on objective published literature, there is no statistical improvement in infection rates with preoperative IV antibiotics in routine arthroscopic surgery of the shoulder and knee.18 However, in today’s legal climate, others have argued that prophylactic antibiotics may be considered the standard of care in the local community and should be given regardless.19 Suggestions to avoid infections include operating efficiently and using antibiotic prophylaxis on immunocompromised patients. Furthermore, avoid the use of intra-articular steroids immediately prior, during, or after surgery. Finally, treat a swollen extremely painful knee postoperatively with immediate aspiration, cultures, and then aggressive arthroscopic débridement if the culture is positive, followed by IV antibiotics.

Early reported complications of meniscal repair were common; these included saphenous neuropathy medially and peroneal neuropathy laterally secondary to injury and for nerve entrapment. Other complications associated with open meniscal repair, including both outside-in and inside-out techniques, were arthrofibrosis, severe postoperative effusion, and superficial and deep infection. Combined complication rates were reported as high as 18%.20 Nerve and vascular injury have also been reported secondary to lateral meniscectomy and posterior cruciate and anterior cruciate ligament reconstruction. Despite the use of guide pins for the placement of the tibial guide pin (Fig. 5-1) during both anterior and posterior cruciate ligament reconstruction, popliteal artery injury (Fig. 5-2) continues to be of concern.21 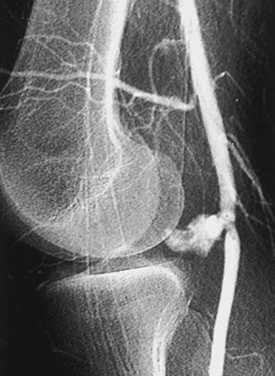 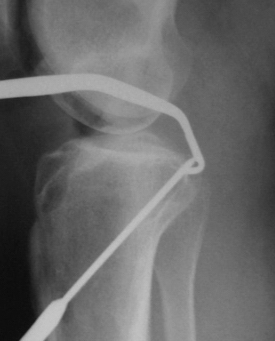