Both green tea and black tea are derived from the same plant, the tea plant (Camellia sinensis). The tea plant originated in China but is now grown and consumed worldwide. The tea plant, an evergreen shrub or tree that can grow up to a height of 30 feet, is usually maintained at a height of 2 to 3 feet by regular pruning. The shrub is heavily branched with young hairy leaves. Parts used are the leaf bud and the two adjacent young leaves together with the stem, broken between the second and third leaves. Older leaves are considered of inferior quality.

Green tea is produced by lightly steaming the freshly cut leaf, whereas black tea is produced by allowing the leaves to oxidize. During oxidation, enzymes present in the tea convert many polyphenolic therapeutic substances to compounds with much less activity. With green tea, oxidation is not allowed to take place because the steaming process inactivates these enzymes. Green tea is high in polyphenols with potent antioxidant and anticancer properties. Oolong tea is a partially oxidized tea.

Of the nearly 2.5 million tons of dried tea produced each year, only 20% is green tea. India and Sri Lanka are the major producers of black tea. Green tea is produced and consumed primarily in China, Japan, and a few countries in North Africa and the Middle East (Table 72-1). Consumption is increasing in the United States.

The chemical composition of green tea varies with climate, season, horticultural practices, and age of the leaf (position of the leaf on the harvested shoot). The major components of interest are the polyphenols.1,2 The major polyphenols (Figure 72-1) in green tea are the following flavonoids: 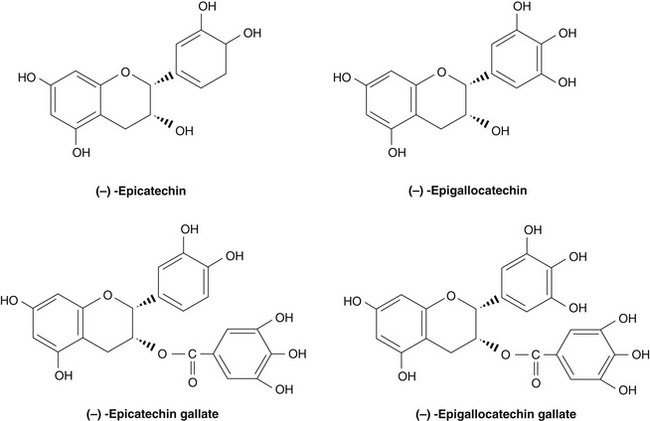 EGCG is viewed as the most significant active component. The leaf bud and the first leaves are richest in EGCG. The usual concentration of total polyphenols in dried green tea leaf is around 8% to 12%.

Other compounds of interest in dried green tea leaf include the following:

One cup of green tea usually contains about 300 to 400 mg of polyphenols and between 50 and 100 mg of caffeine.

Commercial preparations that have been decaffeinated and concentrated for polyphenols to between 60% and 80% total polyphenols are available.

The primary pharmacologic actions center around the antioxidant effects of the green tea polyphenols.3 The degree of antioxidant protection produced by green tea is clearly dose-dependent and requires a threshold dose. In a randomized crossover study, 15 healthy volunteers consumed 500 mL of green tea with different solid contents (1.4, 1.6, 1.8, and 2.0 g/L). Ingestion of the lowest dose produced no change in plasma antioxidant capacity. At the highest dose, the effects increased the plasma antioxidant capacity the greatest at 1 and 4 hours after ingestion.4 This study is extremely significant because it indicates that some of the studies failing to show green tea increasing in vivo antioxidant activity may have been due to insufficient dose.5,6

In addition to exerting antioxidant activity on its own, green tea may increase the activity of antioxidant enzymes. In mice, oral feeding of a polyphenolic fraction isolated from green tea in drinking water for 30 days resulted in significantly increased activities of antioxidant and detoxifying enzymes (glutathione peroxidase, glutathione reductase, glutathione-S-transferase, catalase, and quinone reductase) in the small intestine, liver, lungs, and small bowel.7

With regard to cancer, a number of in vitro and experimental models of cancer have shown that green tea polyphenols may offer significant protection.8,9 Specifically, green tea polyphenols inhibit cancer via many mechanisms, including inhibition of metalloproteinases, various protein kinases, proteins that regulate DNA replication and transformation, tumor proteasomal activity, and the formation of cancer-causing compounds, like nitrosamines. They also upregulate or maintain intercellular gap junction communication and increase apoptosis.

L-theanine (N-ethyl-L-glutamine) or theanine is a major amino acid uniquely found in green tea. In animal models, L-theanine increases brain serotonin, dopamine, and γ-aminobutyric acid levels, and has micromolar affinities for various brain receptor sites, including α-amino-3-hydroxy-5-methyl-4-isoxazole-propionate, kainate, and N-methyl-D-aspartic acid. It has been shown to exert neuroprotective effects in animal models, possibly through its antagonistic effects on group 1 metabotrophic glutamate receptors. Behavioral studies in animals suggest improvement in learning and memory. Clinical studies demonstrated that L-theanine reduces stress, improves the quality of sleep, diminishes the symptoms of premenstrual syndrome, heightens mental acuity, and reduces the negative side effects of caffeine. These clinical effects are directly related to L-theanine’s ability to stimulate the production of α-brain waves (a state often achieved by meditation and characterized by being relaxed with greater mental focus and mental alertness) as well as reduce β-waves (associated with nervousness, scattered thoughts, and hyperactivity).10,11

L-theanine is a very popular ingredient in functional foods and beverages as well as dietary supplements designed to produce mental and physical relaxation, without inducing drowsiness. L-theanine is fast-acting. Generally, the effects are felt within the first 30 minutes, and have been shown to last up to 8 to 12 hours. Based on the results of clinical studies, it has been established that L-theanine is effective in the range of 50 to 200 mg.

The primary clinical applications for green tea are in the prevention of cancer and heart disease, as well as aiding weight loss. It may also offer benefit to bone health and may protect the skin from sun damage.

Epidemiologic studies demonstrated that green tea consumption might offer significant protection against many forms of cancer. However, epidemiologic correlations regarding the relationship between tea consumption and human cancer are confounded by numerous variables. The forms of cancer that appear to be best prevented by green tea are those of the gastrointestinal tract, including cancers of the stomach, small intestine, pancreas, and colon; the lung; and estrogen-related cancers, including most breast cancers, skin cancer, and prostate cancer.12–17 It is generally held that a desirable green tea intake is 3 to 5 cups/day, providing a minimum of 250 mg/day catechins. However, based upon emerging clinical data, this dosage level may not be sufficient once neoplasia develops or in high-risk individuals.

It should be pointed out that although a population-based study of women in Shanghai found that among nonsmokers, the consumption of green tea was associated with a clearly reduced risk of lung cancer, in a dose-dependent manner, 17 studies showed that little benefit in antioxidant effects were found in smokers even at significant dosage levels (e.g., more than 3 grams green tea polyphenols per day).18

In preventing breast cancer, the main anticancer actions may be inhibition of the interaction of estrogen with its receptors in breast tissue. Polyphenol compounds in green tea extracts also block the interaction of tumor promoters, hormones, and growth factors with their receptors—a kind of sealing-off effect—in breast tissue. Experimental and epidemiologic studies demonstrated a protective effect against breast cancer, and clinical results confirmed that green tea might be helpful for early-stage breast cancer. An observational study of 1160 surgical cases of invasive breast cancers were followed for 9 years. During a review of 5264 person-years follow-up, 133 subjects (12%) had a documented recurrence of breast cancer. A decreased hazard ratio for recurrence adjusted for stage was observed with consumption of three or more cups a day of green tea. Particularly in Stage I, the hazard ratio was decreased quite significantly. A similar tendency was observed for Stage II subjects, but was not present among more advanced stages.19

Green tea components such as epigallocatechin-3-gallate have also been shown to have antiproliferative properties through the induction of apoptosis and cell cycle arrest in cervical cancer cell lines.20 Topical and oral treatments of green tea flavonoid components have also been explored to treat human papillomavirus (HPV)-related cervical cancer. A randomized, controlled clinical trial of 51 patients with cervical lesions, including chronic cervicitis, mild dysplasia, moderate dysplasia, and severe dysplasia, were divided into four treatment groups, whereas 39 untreated patients served as controls.

A second trial used a polyphenol ointment made with epigallocatechin-3-gallate applied locally to 27 patients twice a week for 12 weeks. For oral delivery, 200 mg of the ointment or an epigallocatechin-3-gallate capsule was taken orally every day for 8 to 12 weeks. Overall, a 69% response rate (35 of 51 patients) was noted for treatment with green tea extracts, with each treatment showing a similar response compared with a 10% response rate (4 of 39 patients) in untreated controls. A response was considered positive when pretreatment and posttreatment biopsies and Pap smears detected an elimination of abnormal cells, and there was a decrease in or complete elimination of HPV or a decrease in the size of the cervical lesion. The authors of this study concluded that green tea extracts might be a potential therapy regimen for patients with HPV-infected cervical lesions.21

The best data on green tea’s anticancer effects might be on prostate cancer. In vitro and in vivo studies showed that EGCG produces marked inhibition of both hormone-sensitive and hormone-insensitive prostate cancer cells. To demonstrate concentration within the prostate of EGCG after oral intake, men with clinically localized prostate cancer consumed six cups of green tea daily or water for 3 to 6 weeks before undergoing radical prostatectomy.22 Using high-performance liquid chromatography, green tea polyphenols were not detected in prostate tissue or urine from men consuming water preoperatively. In contrast, both the methylated and nonmethylated forms of EGCG were detectable in prostate tissue and urine in men consuming green tea.

In another study in men undergoing radical prostatectomy for prostate cancer, men were given 1300 mg of green tea polyphenols daily until surgery. Serum was collected before initiation of the drug study and on the day of prostatectomy. Serum biomarkers including hepatocyte growth factor, vascular endothelial growth factor, insulin-like growth factor (IGF), insulin-like growth factor binding protein-3, and prostate-specific antigen (PSA) were analyzed by enzyme-linked immunosorbent assay. The results showed a significant reduction in serum levels of PSA, hepatocyte growth factor, and vascular endothelial growth factor in men with prostate cancer after brief treatment with green tea.23 Even at this relatively high dosage of polyphenols, there was no elevation in liver enzymes.

A proof-of-principle clinical trial was designed to assess the safety and efficacy of green tea polyphenols for the chemoprevention of high-grade prostate intraepithelial neoplasia developing prostate cancer within 1 year after repeated biopsy.24 Sixty volunteers with high-grade prostate intraepithelial neoplasia were given either a placebo or 600 mg of green tea polyphenol extract (GTPE) daily. After 1 year, only 1 tumor was diagnosed among the 30 GTPE-treated men (incidence, approximately 3%), whereas 9 cancers were found among the 30 placebo-treated men (incidence, 30%). Total PSAs did not change significantly between the two arms, but GTPE-treated men showed values constantly lower with respect to placebo-treated ones. International Prostate Symptom Score and quality of life scores of GTPE-treated men with coexistent benign prostate hyperplasia improved, reaching statistical significance in the case of International Prostate Symptom Scores. As a secondary observation, administration of GTPE also reduced lower urinary tract symptoms, suggesting that these compounds might also be of help for treating the symptoms of benign prostate hyperplasia. No significant side effects or adverse effects were documented.

These preliminary clinical results in men with prostate cancer provide significant validation of the anticancer effects and safety of higher dosage levels of green tea polyphenols.