Benign prostatic hyperplasia (BPH) is the fourth most common diagnosis in older men.1 More than 50% of men over age 50 years are affected and 90% of men will have an enlarged prostate by the time they are 80 years old. Progression to urinary retention may occur, with an accompanying risk of recurrent urinary tract infections, bladder calculi, and occasionally renal insufficiency. Management options for BPH include exercise, low-fat diet, supplementary medications, minimally invasive therapies, and prostate surgery.

The most common symptoms of BPH are lower urinary tract symptoms (LUTS), such as frequent urination, urgency to urinate, nocturia, weak urinary stream, incomplete bladder emptying, straining to void, and an intermittent stream. A patient may have multiple symptoms but be bothered primarily by one. Prostate cancer, bladder cancer, overactive bladder, urinary tract infections, prostatitis, urethral stricture, and bladder stones can also cause LUTS and must be ruled out before a diagnosis of BPH is made.2

Abdominal obesity and genetic factors appear to be the main risk factors for the development of BPH, which appears to run in families. If one or more first-degree relatives are affected, an individual is at greater risk of developing this disorder.1 Waist size, body mass index, and increases in body weight appear to increase the volume of the prostate gland.3

The role of androgens in the development of prostate enlargement is evident, owing to the fact that BPH does not develop in men who have been castrated before puberty and therefore have greatly depleted levels of circulating androgens. Furthermore, in men with BPH, medical or surgical castration has been shown to lead to a reduction in prostate volume.4

Although testosterone levels decline with age, DHT concentrations remain similar to those in young men in the prostate even if serum levels are low.4 Circulating DHT, by virtue of its low serum plasma concentration and tight binding to plasma proteins, is of diminished importance as a circulating androgen affecting prostate growth.7

Most of the research on BPH and its pharmaceutical treatment has focused on modulating DHT by inhibiting the enzyme 5-alpha reductase. Other intriguing and accumulating research has illustrated the effects of estrogen or, more importantly the estrogen:testosterone ratio in aging men and it effects on BPH.

In animal models, estrogen has shown molecular changes in the prostate of the aging dog.8 The evidence is less clear in humans. Estrogens in the male are predominantly the products of peripheral aromatization of testicular and adrenal androgens.9 Although the testicular and adrenal production of androgens declines with aging, levels of total plasma estradiol do not decline. In fact, estradiol remains relatively constant or even increases with age in men. This increase has been attributed to increased aromatase activity in the aging male, who often also has an increased accumulation of body fat. Fat cells contain aromatase, an enzyme that converts certain androgens to estrogen. The resulting disproportion in the estrogen:testosterone ratio may increase up to 40% in some men.10

By limiting aromatase or inhibiting the binding of estrogen to prostate cells, it may be possible to reduce BPH or slow its progression. More research is needed.

A useful subjective assessment tool for BPH patients is the International Prostate Symptom Score (IPSS). The IPSS is a modification of the American Urological Association (AUA) Symptom Index adding a single question assessing the quality of life or bother score based on the patient’s perception of the problem. The IPSS is a questionnaire that assesses the degree of LUTS and the quality of life of patients with BPH.

Patients can fill out the IPSS form before their examinations, but as little as possible interference from the health care provider and personnel is recommended (Figure 152-1). A score of 7 or less is considered mildly symptomatic, 8 to 19 points as moderate, and a score of 20 to 35 points as severely symptomatic. Both the AUA index and IPSS questionnaire—although not specific for BPH, prostate volume, urinary flow rate, postvoid residual volume, or bladder outlet obstruction—have been validated and are sensitive enough to be to be used in evaluating symptoms and selecting treatment.11 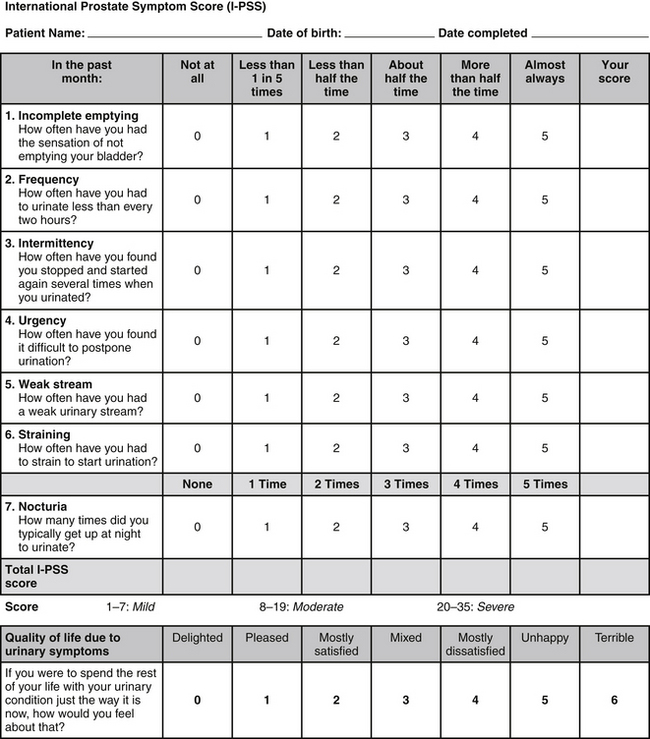 A good physical examination should include a digital rectal examination (DRE) to determine the approximate consistency and shape of the patient’s prostate and abnormalities suggestive of prostate cancer, BPH, or prostatitis. The approximate size of the prostate can be determined with a DRE, however, inadvertent misestimations can be made even by physicians who are highly experienced. Prostate size can be determined most accurately by a transrectal ultrasound scan.

Patients with suspected BPH should undergo dipstick urinalysis testing or microscopic urinalysis to screen for infection and hematuria, proteinuria, pyuria, glycosuria, and ketonuria. If a urine dipstick is positive, a urine culture may be necessary to determine whether the patient’s LUTS is independent of BPH.

Because the symptoms of BPH and prostate cancer can be similar, measurement of prostate-specific antigen (PSA) is often used to differentiate BPH from prostate cancer. Recent studies show there are high levels of false-positive and false-negative PSA test results; therefore, the benefits and risks of such test should be discussed with the patient. PSA testing is one of the tools used to assess for prostate cancer and its severity, along with imaging, PSA density, staging, and Gleason score. This remains a controversial test, however, owing to its lack of specificity, which can lead to the overdiagnosis and overtreatment of indolent prostate cancers.12,13 One European study showed that it takes 1 of 48 men treated for prostate cancer to be saved from prostate cancer death over a 10-year period.12

PSA is a glycoprotein secreted by the glands of the prostate; it is released in the serum with disruption of normal prostatic tissue due to prostate cancer, inflammation, BPH, or trauma.

Finasteride (5-mg dose) and dutasteride (0.5-mg dose), both of which are 5-alpha reductase inhibitors used for the treatment of BPH and male-pattern baldness (1-mg dose of finasteride), will lower PSA levels by approximately 50% regardless of the dose.14 Ejaculation and DRE have been reported to increase PSA levels, but studies have shown the effects to be variable or insignificant.15,16 Prostate biopsy, however, will usually cause a substantial elevation of PSA levels. Therefore, after biopsy, PSA testing should be postponed for at least 3 to 6 weeks.17 Although an elevated level indicates prostate cancer in about 90% of cases, it must be kept in mind that midrange elevations in PSA can be caused by BPH and that in some instances there may be prostate cancer without an elevation of PSA levels. One approach to distinguish the two conditions when PSA is elevated is to perform a free-to-total PSA ratio: more free PSA than complexed PSA suggests BPH rather than prostate cancer. A ratio of around 20% or greater for free PSA is considered more likely to represent BPH than cancer.18

PSA density (PSAD) can be used to differentiate between prostate cancer and BPH in men with PSAs between 4 and 10 ng/mL and normal DRE results. PSAD should be higher in men with prostate cancer than in those with benign disease, because cancer causes a greater elevation in PSA per prostate volume in comparison with BPH. To determine PSAD, the patient’s PSA can be divided by prostate volume (as determined by a transrectal ultrasound examination). Studies show that a PSAD greater than 0.15 may mean a higher risk of prostate cancer. A lower PSAD would likely indicate the patient has BPH. This method should not conclusively determine whether a patient has BPH or prostate cancer, but it can be one piece of the puzzle.19

Left untreated, BPH eventually obstructs the bladder outlet, leading to the retention of urine and eventual kidney damage. Because this situation is potentially life-threatening, proper surgical treatment is crucial. Surgery may also be indicated in patients who have failed medical therapy or have recurrent infections, hematuria, or renal insufficiency. In the past, medical treatment involved a procedure called transurethral resection of the prostate. Because this surgery is associated with the risk of considerable morbidity (sexual dysfunction, incontinence, and bleeding)20 and often makes matters worse, it should be avoided unless absolutely necessary. Surgical procedures that use thermal microwave or laser to reduce hyperplastic tissue are also available. Generally, these newer procedures are less expensive than transurethral resection of the prostate and have fewer complications, although subsequent therapies are often required.21

There is an inverse association between physical activity22 and BPH and a positive one between abdominal obesity and BPH.21

The ingestion of more calories may encourage abdominal obesity and sympathetic nervous system activity, both of which can increase the risk of BPH. Increased sympathetic activity, which is the “fight or flight” arm of the autonomic nervous system, may cause the prostate’s smooth muscle to contract, resulting in a worsening of lower urinary tract symptoms. However, a higher caloric intake does not seem to increase BPH risk when accompanied by increased physical activity.22

It is then possible that physical activity may serve a threefold purpose:

1. It may increase blood flow to the area, allowing the body to remove wastes efficiently.

3. It can reduce excess abdominal weight, which increases overall lower body pressure, thus relaxing the prostate/rectal region and improving blood flow into and out of the area.

A possible theoretical reason why high protein intake may not be helpful relates to a greater osmolar load, which may influence urinary output and thus impose an undue extra burden on an already taxed system.6 Therefore, we recommend against ingesting excess animal protein as a means to increase total protein intake. Instead, high-quality, plant-derived protein and protein from coldwater fish in moderate amounts is probably a reasonable recommendation until we know more about the relationship between protein intake and BPH.