Small intestinal bacterial overgrowth (SIBO) is an abnormal colonization within the small bowel by bacteria normally found in the colon, mouth, or pharynx.1 Also called bacterial overgrowth of the small intestine (BOSI), “blind-loop,” or “stagnant loop,”2 SIBO is a potentially serious disorder that leads to problems such as malabsorption, anemia and weight loss, malnutrition,3 increased intestinal permeability, and bone loss.4 Breath testing for hydrogen (H2) and methane (CH4) provides a simple noninvasive means of detecting SIBO. Once SIBO has been identified, antimicrobials are typically administered to eradicate the bacteria. Subsequent attention to underlying causes is also essential in preventing recurrence.

Bacterial overgrowth of the small intestine is an overlooked contributing factor in several common disorders.5 Several studies, for example, demonstrated the presence of SIBO in patients with irritable bowel syndrome (IBS).6 In one such study, in which 84% of IBS patients tested positive for SIBO (vs 20% of healthy controls), successful eradication of SIBO led to a 75% improvement (compared with a 36.7% improvement in those with incomplete eradication, and an 11% improvement in participants receiving placebo).7 SIBO has also been observed in patients with chronic fatigue syndrome8 and/or fibromyalgia.9 SIBO tends to increase intestinal permeability (aka “leaky gut”).10 Investigators who found leaky gut in 37.5% of patients with fibromyalgia suggested exposure of immune cells to luminal antigens and consequent immune modulation as a likely mechanism for the pain syndrome.11 A variety of anatomic and motor disorders of the small bowel can lead to SIBO, including surgical loops, diverticula, strictures, adhesions, tumors, fistulas,2 scleroderma,12 intestinal pseudoobstruction,13 and diabetic enteropathy.14 Jejunal diverticulosis5 and Crohn’s disease15 have both been associated with SIBO, particularly in patients with previous intestinal surgery. Although the concentration of bacteria normally increases exponentially toward the distal end of the small intestine,2 far fewer bacteria inhabit the small intestine than the colon.16 A common feature of most of these disorders is stasis of small bowel contents, which allows bacterial concentrations to increasingly resemble those of the large intestine (Box 10-1).16,17 Although many of the bacteria found in SIBO are beneficial within the colon, these same microorganisms can have deleterious effects within the delicate environment of the small intestine.

• Immunodeficiency (especially of secretory immunoglobulin A)

Interestingly, many patients with celiac disease whose symptoms persist despite a gluten-free diet have been shown to have SIBO, with improvement only after bacterial eradication.18 The incidence of SIBO also increases with age.19 It has been found that 64% of individuals more than 75 years of age with chronic diarrhea have colonic-type flora in their small bowels5 and that SIBO is the most common cause of clinically significant malabsorption in elderly persons.2

For SIBO to produce clinical consequences, an adequate concentration of organisms with particular metabolic properties within specific locations of the small intestine is required. For example, a heavy concentration of strict anaerobes and coliforms in the proximal small intestine is more likely to be associated with malabsorption than a flora consisting of fewer strict anaerobes or coliforms or when strict anaerobes or coliforms are located in the distal small intestine.16 For this reason, SIBO may be asymptomatic in some individuals yet produce signs and symptoms in others. Box 10-2 outlines clinical signs and symptoms that alert the practitioner to consider testing for SIBO.

• Use of acid-blocking medications

The classic SIBO syndrome is characterized by megaloblastic anemia resulting from vitamin B12 deficiency and weight loss and diarrhea secondary to fat malabsorption.16 However, many patients present with nonspecific symptoms 1 to 2 hours after a meal, including bloating, flatulence, and abdominal pain resulting from bacterial fermentation of intraluminal sugars and associated gas production (Box 10-3).8,18

Via secretory and osmotic processes, diarrhea may occur even in the absence of significant steatorrhea. Unabsorbed fats and bile salts are modified by bacteria in the colon to hydroxylated fats and free bile acids, respectively, which stimulate colonic secretion of water and electrolytes.16 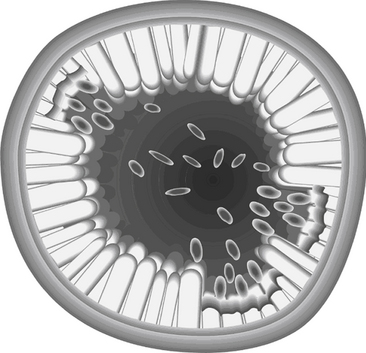 Fat malabsorption in SIBO can also result from mechanical interference, specifically formation of a pseudomembrane, thought to represent a maladaptive defense mechanism against the bacterial overgrowth.24

Unabsorbed fatty acids can form insoluble soaps with calcium and magnesium, rendering them unavailable.3 Osteomalacia, night blindness, hypocalcemic tetany,2 or metabolic bone disease4 may develop as a consequence of lipid malabsorption in patients with SIBO. Although rare, iron deficiency anemia may result from blood loss.3

SIBO may also lead to vitamin B12 deficiency, with megaloblastic anemia and low serum cobalamin levels.2,16 Although intrinsic factor is not altered by anaerobic bacteria, microbes are capable of detaching vitamin B12 from the intrinsic factor, as well as directly using B12.22 Either mechanism has the effect of making the vitamin unavailable. Paradoxically, serum folate values are usually normal or even elevated in SIBO, a result of bacterial synthesis of the vitamin.25

Hypoproteinemia may also occur in SIBO, secondary to protein-losing enteropathy and protein malabsorption.3,17 In addition, bacteria may metabolize proteins to ammonia and fatty acids, thereby rendering them unavailable to the host.23