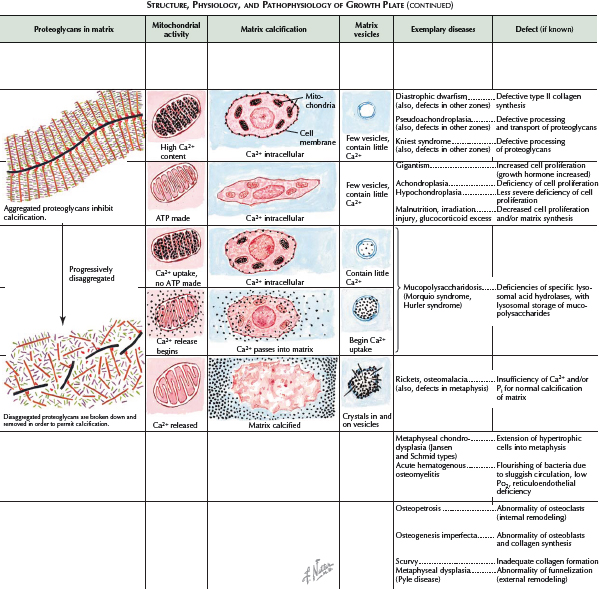 The growth plate may be divided into three anatomic components: a cartilaginous component with various histologic zones; a bony component, or metaphysis; and a fibrous component that surrounds the periphery of the plate and consists of the ossification groove of Ranvier and the perichondral ring of La Croix. Each of the three components of the growth plate has its own distinct blood supply. Their vascular differences influence their metabolic activity levels (see Plate 2-17).

Reserve Zone. This zone contains chondroprogenitor cells and exhibits a relatively low level of matrix production. It lies immediately adjacent to the secondary ossification center and comprises cells that appear to be storing lipid and other materials. The cells are spherical and may exist singly or in pairs. They are relatively few in number, with more extracellular matrix between them than between cells in any other zone.

The matrix shows a positive histochemical reaction for the presence of a hyaluronan and an aggrecan proteoglycan aggregate. The cytoplasm exhibits a positive stain for glycogen. Electron microscopy reveals that these cells contain abundant endoplasmic reticulum, a clear indication that they are actively synthesizing protein.

Oxygen tension (PO2) is low, which suggests that blood vessels passing through the reserve zone in cartilage canals do not readily exchange nutrients with it (see Plate 2-16). Chondrocytes in the reserve zone do not proliferate or do so only sporadically.

Proliferative Zone. This zone exhibits higher levels of cellular proliferation and matrix production, which together contribute to longitudinal growth. These chondrocytes are flattened and aligned in longitudinal columns, with the long axis of the cells lying perpendicular to the long axis of the bone; they are packed with endoplasmic reticulum. The cytoplasm stains positively for glycogen.