Interrelationships between Zones of the Feet and Meridians

30 Interrelationships between Zones of the Feet and Meridians

All the systems comprising a person, those which are visible and those which are invisible, are interactively linked. Their interaction ensures the harmonious operation of all the vital functions. Among many others, the energetic principles of the meridians and the zones of the feet may also be combined.

There is a therapeutic “bridge” between the two methods. Approximately a quarter to a third of the life force which flows in a meridian is also available to the organ or tissue after which it is named. As there are organ zones on the feet for most of the names of the meridians, where there is strain these zones can be treated at the same time.

The term meridian comes from Chinese Medicine and denotes specific paths of an energetic flow system which runs through the person. The acupuncture points are arranged on them. The principle is comparable to an underground railway network in which these points correspond to the underground stations. Dr. Reinhold Voll was one of the first people to measure this energy using an electroacupuncture device (EAV) he developed in the middle of the last century.

The flow of energy in the meridians forms a dynamic cycle which is known as the “Chinese organ clock.” Within a 24-hour period, each of the 12 main meridians is active for 2 hours and in a recovery phase for the same time. After the twohour peak period of the meridian, it transfers its energy to the next meridian. After 24 hours the cycle begins again.

The 12 main meridians are arranged in pairs and run symmetrically to the midline. Six meridians are each assigned to the Yin and Yang principle. Both these complementary “forces of the universe” were already known in the natural philosophy of ancient China and are roughly comparable to the functions of the sympathetic and parasympathetic nervous system.

In connection with reflexotherapy of the feet (RTF), only the meridians which affect the feet are discussed accordingly. They are also paired there.

Three Yin and three Yang meridian pairs also supply the feet in situ (Fig. 30.1). Therefore with presumed afflictions in the zones, knowledge about the path of the meridians should be included at the same time.

The kidney meridian passes through, inter alia, the zones of the organs of the lesser pelvis on the medial side of the heel. Swelling, significant cold or warmth, spider veins, or pain at these points may therefore also be seen as energy flow disturbances in the kidney meridian. Therapeutic consequence: check the zone of the kidneys and if affected include in treatment.

Spleen–pancreas and liver meridians start medially and laterally on the nail of the big toe. Scars such as those which arise, for example, during surgical removal of a nail or a Hallux valgus operation may disturb the energy flow of both these meridians. The three organ zones concerned are examined and included in the treatment if affected.

The aforementioned three Yin meridians intersect approximately four finger-widths above the inner malleolus. If congestion, pain, changes in temperature, varicosis and/or a crural ulcer (ulcus cruris) occur here, this indicates weaknesses in the metabolic system. The four zones of the kidneys, spleen, pancreas, and liver are included in the treatment if affected. 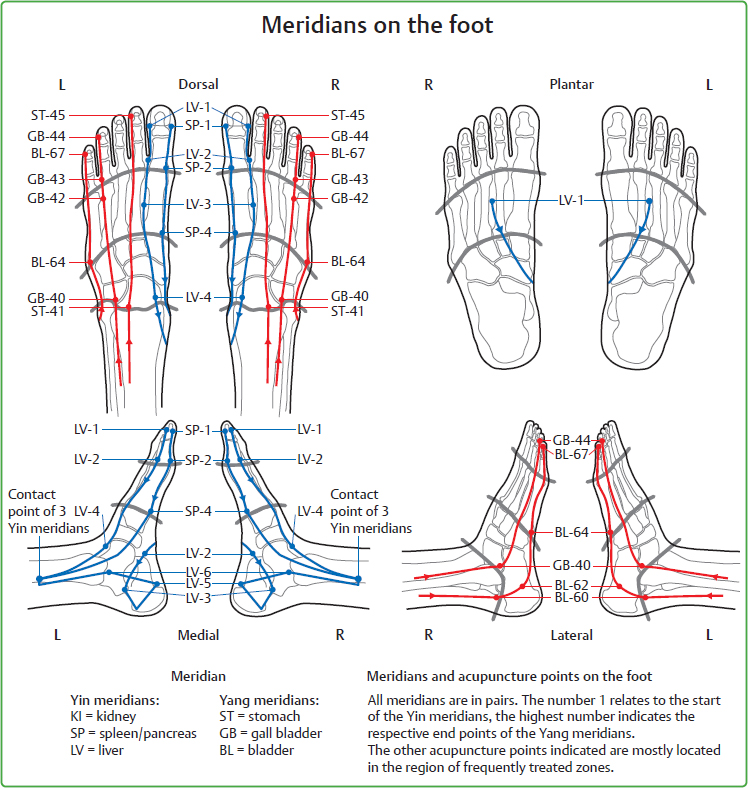 Tags: Reflexotherapy of the Feet
Nov 18, 2016 | Posted by admin in ORTHOPEDIC | Comments Off on Interrelationships between Zones of the Feet and Meridians
Premium Wordpress Themes by UFO Themes
WordPress theme by UFO themes