Cimicifuga racemosa is a perennial herb native to North America that grows on hillsides and in woods at higher elevations from Maine and Ontario to Wisconsin, Georgia, and Missouri. The large, creeping rhizome produces stems up to 9 feet high. The ovate or oblong leaflets are 1 to 6 inches long and 4 inches wide, whereas the smaller leaflets are ternate, then pinnate, and sometimes even further divided. Small, white, fetid flowers grow in long racemes from May to August. The rhizome is the portion of the plant used for medicinal purposes.

C. racemosa contains at least three important natural product groups that contribute to its pharmacology: cycloartane triterpene glycosides, such as actein and 26-deoxyactein; phenylpropanoid esters; and phenolic compounds, such as caffeic acid derivatives, including ferulic acid and isoferulic acid (Figures 77-1 and 77-2).1–3 Early reports showed that it also contained the phytoestrogen flavonoid formononetin, but more recent analysis demonstrated that this compound was not contained in either the crude herb or standardized extracts. At this point, despite extensive chemical, biological, and clinical studies, neither the active constituents nor the exact mode of action of black cohosh have been determined.4 Currently, the standardization of cimicifuga preparations is based on the content of triterpene glycosides, calculated as 26-deoxyactein. Other important triterpene glycosides include actein and cimicifugoside (aglycone cimegenol).

The generic name cimicifuga comes from the Latin cimex, a bug, and fugo, to drive away, alluding to its use as a vermifuge. Native Americans used cimicifuga rhizomes for the relief of pain during menses and childbirth, as well as snakebite. The rhizome of C. racemosa was listed in the National Formulary from 1936 to 1950 and in the U.S. Pharmacopeia from 1820 to 1936. Eclectic physicians in the early part of the twentieth century used cimicifuga in gynecologic disorders, as well as rheumatoid and myalgic pain.

Although use in the United States declined dramatically from 1950 to 1995, cimicifuga preparations were used extensively in Europe during this same period, primarily as a natural alternative to hormone replacement therapy (HRT) during menopause. This popularity was based on substantial empiric and clinical evidence.

The primary pharmacologic effects of cimicifuga appear to revolve around its ability to impact endocrine regulatory mechanisms.5–8 In the past, this activity was thought to be related to various phytoestrogenic components of cimicifuga, with formononetin perhaps being the most significant.9 However, this line of reasoning has been questioned by the lack of formononetin in clinically studied cimicifuga extracts, as well as equivocal reports on phytoestrogen activity. Current thinking is that certain cimicifuga components exert selective estrogen receptor modulator (SERM) activity with no action in the uterus, but that beneficial effects do occur in the hypothalamo/pituitary unit and in the bone.5,10,11

Cimicifuga’s primary effect on endocrine regulatory mechanisms appears to be the result of complex synergistic actions of its key ingredients. Evidence suggests that these compounds act on both the hypothalamus and vasomotor centers to produce significant clinical benefits in menopause. For example, one study to determine the endocrinologic actions of cimicifuga extract involved treating 110 women with either cimicifuga extract (supplying a total daily dose of 8 mg of 27-deoxyactein) or placebo.8 After 2 months of treatment, luteinizing hormone (LH) decreased by 20% in the cimicifuga group compared with the placebo group. Unlike estrogens, cimicifuga does not affect the release of prolactin and follicle-stimulating hormone. Researchers then divided the extract into three distinct types of active compounds on the basis of their ability to reduce LH secretion in ovariectomized rats and to compete in vitro with 17-β-estradiol for estrogen receptor binding sites, as follows:

The authors concluded that “the LH suppressive effect of C. racemosa extracts observed in menopausal women and ovariectomized rats is caused by at least three different synergistically acting compounds.”

Apparently, one of cimicifuga’s key pharmacologic effects is inhibition of the secretion of LH by the pituitary gland. This effect is accomplished equally by components that do and do not bind to estrogen receptors. If cimicifuga was simply mimicking the effects of estrogen, it would certainly alter the secretion of other pituitary hormones just like estrogen, but it does not. It appears that enhancement of dopaminergic activity is the responsible mechanism for some of these central effects on menopausal symptoms.5,12

Cimicifuga extracts also appear to exert some beneficial effects on preventing bone loss. In an experiment carried out on ovariectomized rats, cimicifuga extract increased the expression of collagen I and osteocalcin. Similarly, other animal studies demonstrated that cimicifuga extract significantly reduced the urinary parameters of increased bone metabolism and bone loss. The effects in these animal models were similar to raloxifene, a well-confirmed SERM.

Importantly, although early studies reported a direct estrogenic effect with cimicifuga, the current perspective is that ethanol and isopropanol extracts of black cohosh do not contain formononetin or other estrogenic flavonoids and, therefore, do not bind to the estrogen receptor, upregulate estrogen-dependent genes, or stimulate the growth of estrogen-dependent tumors in in vitro and animal models.5,13,14

C. racemosa extracts are by far the most widely used and thoroughly studied natural alternatives to HRT in menopause. Clinical studies showed that cimicifuga extracts relieved not only hot flashes but also depression and vaginal atrophy.5,15–23

Although evidence indicates that cimicifuga may provide benefit in other gynecologic complaints such as premenstrual syndrome, amenorrhea (both primary and secondary), dysmenorrhea, polymenorrhea, uterine fibroids, and fibrocystic breast disease, its primary clinical application is menopause.22–26

In one of the first clinical studies, a large open study involving 131 doctors and 629 female patients, cimicifuga extract (two tablets twice a day, providing a daily dose of 4 mg 27-deoxyactein) produced clear improvement of menopausal symptoms in more than 80% of patients within 6 to 8 weeks.18 As shown in Table 77-1, both physical and psychological symptoms improved.

TABLE 77-1 Cimicifuga in the Treatment of Menopause 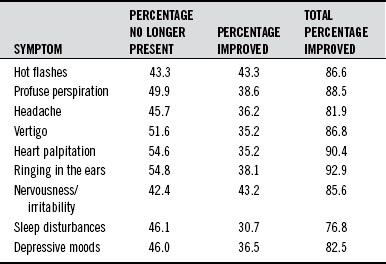 Most patients reported noticeable benefits within 4 weeks after the onset of cimicifuga therapy. After 6 to 8 weeks, complete resolution of symptoms was achieved in a large percentage of patients. Cimicifuga was well tolerated, since there was no discontinuation of therapy, and only 7% of patients reported mild transitory stomach complaints.

In one of the first double-blind studies, 60 patients were given cimicifuga extract (two tablets twice a day providing a daily dose of 4 mg 27-deoxyactein), conjugated estrogens (0.625 mg/day), or diazepam (2 mg/day) for 12 weeks.19 Results from standard indexes of menopausal symptoms indicated a clear advantage of cimicifuga extract over both drugs. Cimicifuga’s effect on relieving depressive mood and anxiety associated with menopause was far superior to either diazepam or conjugated estrogens, as shown in Table 77-2.

One of the most used assessments in clinical studies in menopause is the Kupperman Menopausal Index. This quantitative assessment of menopausal symptoms is achieved by grading severity: severe = 3, moderate = 2, mild = 1, not present = 0. The symptoms assessed are the following: